Since the mid-20th century, various land use practices have degraded about 5 billion hectares (about 43%) of Earth's vegetated land. This land degradation results in reduced productive potential. The loss of arable land has been caused by a number of factors, many or most of which are tied to human development. The primary causes are deforestation, overexploitation for fuelwood, overgrazing, agricultural activities, and industrialization. An overview of the state of soil degradation in the world is shown on the map below, which was created by Philippe Rekacewicz, UNEP/GRID-Arendal and presented in the Atlas of desertification in the world, 2nd ed., Arnold Publishers, London, 1997. 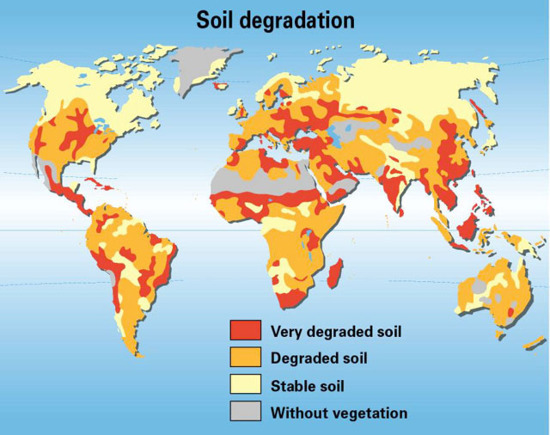 The major forms of soil degradation can be divided into the following four groups:

Current rates of soil degradation are estimated at 9 million ha per year (about the same size as Ireland!).

Soil erosion is the detachment and transportation of soil particles by the forces of water and/or wind. It is a process that transforms soil into sediment. Sediment consists of transported and deposited particles or aggregates derived from rock, soil, or biological materials.

To grow and absorb nutrients, roots require adequate oxygen in the soil. Pore space must be sufficient for roots to grow and penetrate the soil, and for water to filter through. Compacted soils are more poorly aerated and also have a greater risk of runoff and surface erosion. Site preparation treatments, such as tillage and subsoiling, tend to loosen the soil and increase soil air. Some examples of soil decompaction methods are presented below.

Core aeration (as shown in the photo above) is the process of mechanically removing plugs of thatch and soil from lawn and turf. Aeration opens the soil, improves water infiltration, roots, and turf growth, helps reduce compaction, and reduces thatch.

Lower parts of the soil profile can also be compacted. Winged subsoilers are used to break up compact subsurface horizons of forest soils to improve aeration and drainage and to increase effective rooting depth. Subsoilers are limited by rock, slash, and stumps, and are generally used for landing and skid road rehabilitation on forest soils. Laterization is a soil-forming process common in the humid tropics under broadleaf evergreen forests. It is caused by chemical weathering and leads to the development of soils with low silica/sesquioxide ratios in the clay fraction, low clay activity, low content of most primary minerals and soluble constituents, and a high degree of aggregate stability. These soils are usually red in colour. 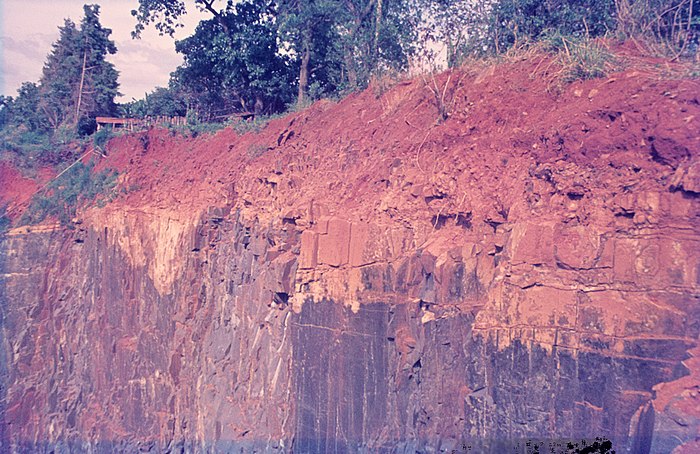 Hardsetting is a surface condition with consequences similar to crusting. It occurs following wetting in soils that have low aggregate stability. Wetting causes aggregates to break down and enables clays to move within the wetted profile. As the soil dries, poor structure and movement of clay results in a massive, compact, hard surface. A soil that exhibits hardsetting will not respond to finger pressure and is restrictive to seed emergence and root penetration. The main difference between hardsetting and crusting is that hardsetting occurs throughout a significant fraction of the profile whereas crusting is limited to a small fraction of the upper profile. Examples of chemical degradation include: depletion of soil organic matter and nutrients, and contamination, from sources such as agricultural activities, industrial activities, and mining activities.

Depletion of Organic Matter and Nutrients

In natural systems, the production of biomass is in equilibrium with nutrient reserves. However, in systems where land has been cleared or cropped, a net removal of nutrients and depletion of organic matter from the soil occurs. Once available nutrients are depleted they can only be replenished while reserves last, through mineralization of organic matter, dissolution of mineral precipitates and desorption of strongly adsorbed chemical species.

See the SoilWeb Organic Components section for details on the importance of organic matter to soil.

Soil management practices such as manure, fertilizer and lime applications, as well as crop rotations that include legumes or small grains, can reduce organic matter and nutrient losses. Compost application also provides a generous source of nutrients to the system.

Excessive buildup of salts in the soil is toxic to plants. This process occurs when water with soluble salts moves up the soil profile (from groundwater). As water evaporates, salts are left behind in the rooting zone, reaching levels toxic to plant growth. Irrigation can lead to salinization over time.

Excessive acidity is detrimental to both plant growth and soil microbial activity. Soils become acidic when H+ and Al3+ ions replace basic cations such as Ca2+, Mg2+, Na+, and K+ on cation exchange sites. This leads to increased leaching losses of basic cations. Soils high in humus and clay have a higher buffering ability. The application of lime is used to raise the pH of acidic soils. Acidification can occur naturally in some systems through weathering but is intensified in humid areas where acid rain is a major concern. The process is also accelerated in areas where alkaline plant material is removed from the surface.

Heavy metals are those metals which have densities >5.0 Mg m-3. In soils these include the elements Cd, Co, Cr, Cu, Fe, Hg, Mn, Mo, Ni, Pb, and Zn. There are many sources of heavy metal contamination including atmospheric deposition (i.e., from smelter and gas exhaust), waste disposal (i.e., cadmium in batteries and sewage sludge), and application directly to soil (i.e., fire retardants, fertilizers and pesticides). At low concentration these metals are not toxic and may even be required in small amounts for plant nutrition. However, at higher concentrations, heavy metals become toxic to both plants and animals. 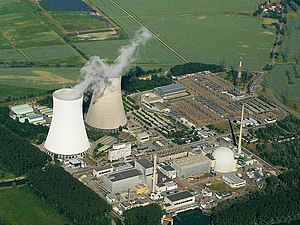 Radionuclides are any man-made or natural elements that emit radiation. They are added to the soil through atmospheric deposition of residues from nuclear weapons testing, and through the disposal of wastes produced by nuclear weapons manufacturing and nuclear power plants. These long-lived substances bind strongly to clays and sesquioxides and are chelated by organic matter. Translocation of radionuclides through plants is possible and of great concern for plant health and the greater food web.

These chemicals are artificially synthesized compounds and may either be added to the soil through planned treatments (i.e., pesticide application) or accidental spillage (i.e., fuel spills). Many of these chemicals are toxic to plants or microorganisms and resistant to biological breakdown. They may be transported from the soil to the atmosphere, water and plants. 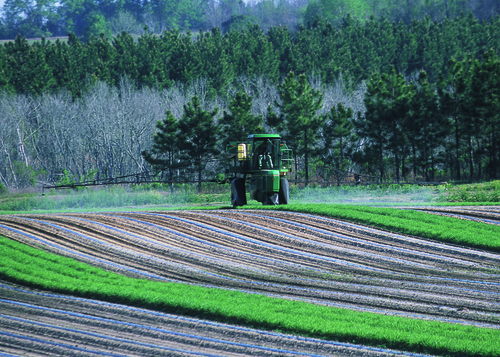 Intensive agricultural production may lead to a decrease in soil organic matter and depletion of nutrients over time. The application of fertilizers, pesticides, fungicides, and irrigation water lead to many of the contamination problems listed above. Application of livestock manure must be managed so as not to pollute waterways. Where manure application exceeds plant nutrient requirements, nitrate leaching can occur. Land that is repeatedly treated with excess manure can have high accumulations of nutrients, trace elements, and sodium. A number of industrial activities lead to soil contamination including smelter emissions, land disposal of industrial wastes, municipal sewage sludge and dredge spoil. Industrial waste frequently contains high concentrations of salts or heavy metals, which accumulate in the soil and cause a number of problems.

Mine spoils frequently degrade soil through the process of acidification (pH <3), by reducing the availability of micronutrients, and by increasing the concentration of heavy metals. Without expensive and significant remediation, it is difficult for vegetation to establish on these sites.

The SoilWeb Soil Organisms section describes the different groups of floral and faunal organisms found in soil. Stable soil ecosystems are characterized by extremely diverse floral and faunal communities. Loss of this biodiversity would have a negative impact on ecosystem functioning. Soil biodiversity is jeopardized by certain cultivation and management practices in both agriculture and forestry. Practices such as deep mechanical site preparation, intense cultivation and intense burning can reduce the amount and type of habitat as well as the number and type of host organisms available. The application of pesticides and fertilizers as well as the unintentional introduction of pollutants into the soil reduces the integrity of the system and can make conditions unlivable for subsurface organisms. Agricultural practices such as planting legumes, using crop rotations and green manures can help reduce the loss of biodiversity that frequently accompanies intensive crop production.

Forestry practices such as leaving habitat remnants that approximate natural disturbance patterns and avoiding large-scale, deep mechanical site preparation can also help to maintain biodiversity. The application of compost is very effective in maintaining soil diversity because it acts as a source of nutrients.