Why is Transportation Important in the Global Southeast?

Transportation is a significant component of the economy as an important measure of development. A successful transportation system consists of an extensive network of infrastructure such as roads, bridges, tunnels and rail tracks.[5] According to research conducted by Rodrigue and Notteboom, the influence of transportation to the economy becomes greater where the economic activities are highly related to the mobility of people, information and communication technologies.[5] It is also suggested that efficient transport systems are more likely to provide better economic and social benefits as well as better access to markets and employment, and vice versa.[5]As many of the cities in the global southeast are newly evolving and expanding, it seems important to take a consideration on how transportation is contributing to create more opportunities and benefits through the networks of transportation in these developing regions.

Why is Transportation Important in Jakarta?

Jakarta is one of the most populous cities in the world, and it has been continuously growing over the decades.[6] Since the need to travel across the region tends to become greater as the population grows, this becomes an important reason to look at the city and its public transportation system as a case study. According to the statistics, about 3.5 million people commute in Jakarta and it usually takes two to three hours to drive from the urban fringes to the urban core, where all the facilities and work offices are clustered.[7] This remains a huge concern for many citizens because commuting is not only time-consuming but also cost-ineffective. Such concern had led to an increase in the use of private vehicles such as cars and motorcycles. At the same time, it is troubling that the increased use of private vehicles is highly associated with traffic congestion in Jakarta.[8] The fact that 70% of air pollution originates from traffic congestion adds another reason why Jakarta is in need of a sustainable, and yet accessible transportation system.[7] Looking at how Jakarta responded to the increasing demand of transportation and increased travel from the urban fringes to the urban core would give a better understanding of how public transportation can directly affect the quality of life, accessibility to the market and public services, as well as the mobility and flow of people within the city.

One of the main complaints of those who live in and visit Jakarta is the congestion the city experiences on a daily basis, mainly during the morning and late afternoon rush hours. While congestion is still a major concern, overall Jakarta has made massive improvements in their public transit system, many of these improvements showing promising early results with 32% of commuters choosing public transportation in 2019.[9] Transit oriented development, which favors integration with mass transit, high density mixed land use, and the reduction of private car usage needs to be implemented further in Jakarta if it is going to succeed in solving its congestion and planning for a sustainable future. However, according to research by Budiati et al., transit oriented development is lacking around the majority of the rapid rail stations of the newly completed MRT,[10] indicating that Jakarta may not be focusing enough on transit oriented development as a solution. The three main public transit mediums in Jakarta are the rapid bus transit system (BRT), the several rail lines which include the MRT and LRT, and motorbikes. 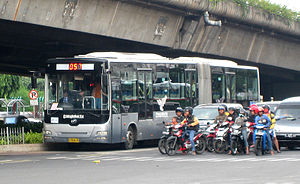 Jakarta Traffic - TransJakarta Bus, automobiles, and motorbikes at a stop light
The rapid bus transit system TransJakarta, also known as the BRT, began service in 2004 and was the first rapid bus system to be integrated in Southeast Asia. Over the years the BRT has successfully grown to host 155 routes covering 80% of Jakarta’s area.[9] Bus stops have been strategically placed in the center of roads to reduce roadside friction such as parked cars, and many main roads have protected bus lanes which ensure that buses do not contribute to the already existing traffic. Furthermore, the interiors of buses are described as clean, air conditioned, and safe. Moreover, service is described as frequent. Busses and stops are well lit and have security cameras as well as supervising staff during rush hour. The bus system has streamlined their services by choosing a tap payment card for entering and exiting stops, which helps busses stay on time and facilitates an easier boarding experience for passengers. Further, the fares for both the MRT and BRT are very affordable, only costing 25 cents USD[11] per person and allowing for free transfers.[2]

Jakarta has recently upgraded their urban landscape with the addition of the MRT, their new inner-city rapid rail transit line which completed its first phase in early 2019. Spanning 15 km and traveling from dense suburban landscape to the busy city center, the line has reduced north-south travel time to 30 minutes and carries an average of 83,000 passengers daily.[9] Jakarta also unveiled the LRT, a smaller line on the east side of the city that serves an average of 7,000 passengers daily. Both the LRT and MRT have plans to expand further to reach other parts of the city, as well as to overlap with one another and further overlap with the BRT routes. However, they have been criticized for not embracing the tenets of transit-oriented development. Accessibility to stations overall can be difficult in the city and it is described as being an “unpleasant and unsafe pedestrian experience.”[12]

Another of the challenges that Jakarta has been continuing to face in terms of its transportation is the ever-expanding development of unplanned illegal settlements on its outskirts. Similar to many urban centers of the global south, many are immigrating to Jakarta only to find limited and expensive housing options, thus beginning creation of informal slums. This puts pressure on the transit system to continually stretch further and further to reach the outskirts. With the growth of the city comes inevitably longer commute times which can further discourage commuters from choosing public transit. While feeder buses and commuter trains do exist to connect the Greater Jakarta area with the city of Jakarta, they only cover 67% of Greater Jakarta,[9] leaving many to resort to other means. Previously, Jakarta had implemented a 3-1 policy for rush hour cars to hold at least 3 passengers in order to try and reduce the number of cars on the road, but this initiative was dismantled in 2016 when it became clear that it was not assisting in decreasing congestion. In fact, this was creating further dangerous conditions as children became “jockeys” or passengers-for-hire, who would offer to enter stranger’s cars for pay to ensure the driver had the proper number of passengers.[13]

Motorbikes have seen a large spike in popularity in Jakarta as a way of transportation and delivery. While not currently formalized by the municipal government they act in the way of a taxi and facilitate faster commutes by swerving around and between vehicles stuck in traffic. Taking a fraction of the space and gas, they are a readily accessible way to travel the city but do pose some of their own challenges. Motorbikes pose a risk to cyclists, and their lack of adherence to the laws of the road may endanger other drivers as well as their passengers. While Jakarta is cracking down on enforcing laws of the road with laws like the new “even-odd” policy, enacted in 2019, which restricts the days of the week certain vehicles may drive on main and arterial roads,[14] motorbikes have still to be welcomed into formality by the municipality but apps such as Go-Jek have come into creation to help facilitate the experience and provide some reliability and more positive experiences for passengers.[15] Motorbikes also work in a complimentary fashion to existing transit systems, with passengers often using motorbikes to reach a public transit stop or taking a motorbike from a stop to their final destination.[16] This serves as a useful example of how transit systems can be successful in diversity and utilize different forms of transit for different means. This is also informative in how transit-oriented development in Jakarta will need to cater to many different forms of transit. Unfortunately, Jakarta’s cyclist culture and infrastructure is not up to par with the developments in rail and bus systems, with an overall lack of bike lanes or amenities such as showers which are important to cyclists in Jakarta’s sub-tropical climate.[17]

Although Jakarta has made much progress over the past few years, it still has a long way to go before it can be considered to have a sustainable transit system. The success of the MRT in number of passengers is impressive but does not excuse the fact that more than half of commuters still choose some form of private transport to travel, perpetuating the traffic and environmental damage that car trips have on the environment. With Phase 2 of the MRT and LRT currently under construction, and the electrification of BRT buses anticipated for the near future, rail and bus transit appear to be Jakarta’s main focus for solutions in relieving congestion for the city. However, it still fails to sufficiently practice the level of transit-oriented development that will likely be required for its citizens to more readily embrace public transit, in its failing of creating space for pedestrians, cyclists and slum dwellers.

Jakarta’s response to its issues of congestion, long traffic hours and auto-mobile pollution has been heavily invested in its public transportation infrastructure. Environmental and health issues become prevalent as vehicle pollution is the city’s largest polluter. The majority of the city is road-centric and auto-mobile focused and by adding more options to their public transportation system they aimed to increase travel accessibility and lower travel costs. With the MRT and the LRT increasing accessibility to outside the city limits, and the BRT to improve travel within it, they unknowingly decreased accessibility in certain aspects. Public Transportation can be said to be catered towards the middle and low-income based citizens as it is more focused on connecting citizens to travel within Jakarta’s urban core, business, and shopping districts. This shy’s away from the acknowledgement of low-income and citizens who live in informal settlements, usually on the outskirts of the city’s border. While public transportation fees and fares are relatively cheap, the problem lies within the accessibility from the informal settlements to the public transportation stations or routes.

What we learnt from this case study is that the cities definition of formal and informal plays a huge role in efficiently tackling issues that the city faces. While Jakarta’s answer to congestion and pollution is to add travel infrastructure and increase the efficiency and operation of its buses, the informal part of the city is left to adapt. The Informal’s response to transportation comes in the form of increased ownership and usage of motorbikes. These motorbikes can maneuver through the city more efficiently due to its size, plus it is cheaper in maintenance, gas, and pollutes less. However, as the city does not recognize it as a formal mode of transportation there are less road regulations to consider their place in the city leading to an unsafe environment.

The informal sector of Jakarta plays a huge role in the city, yet it is overlooked due to it’s classification.  More than 60% of Jakarta’s economy is considered informal, playing in many parts of the city, such as transportation, or street vendors.[18] The informal economy thrives due it’s adaptability and response to needs and necessity. The informal transportation of motorbikes (Go-Jeks) has vastly improved over the last few years due to advances in implementing Information Communication Technologies through phone applications. Many in both the informal and middle-income settlements use ICT informal transportation to substitute the use or ownership of a car and is seen to often be used to travel to nearby public transportation systems.[15] To fully move towards a sustainable and efficient future for public transportation, Jakarta must redefine their categories and classifications of what is 'informal' and what is 'formal'.