Treacher Collins Syndrome (TCS), also known as Mandibulofacial Dysostosis, is a rare genetic condition affecting the development of the bones in the face. Affected individuals most commonly have underdeveloped cheek bones (called the zygomatic or malar bones) and a small lower jaw (also known as the mandible), as well as possible eye and ear abnormalities, which leads to a distinct physical appearance. However, not all individuals with TCS are affected to the same degree, with some people exhibiting very mild features of the condition, and others exhibiting a much more severe form. The main concern for babies born with TCS is difficulty breathing, which can occur as a result of having a smaller airway.[1] Typically, individuals with TCS have a normal life expectancy and normal intelligence.[2] 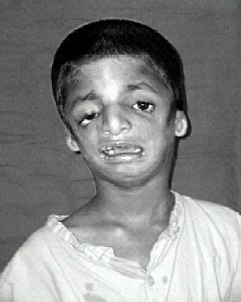 Young child with Treacher Collins Syndrome. Some of the common physical features can be seen. [3]

Treacher Collins Syndrome is estimated to occur in 1 of every 50,000 live births, and affects both males and females equally. In some cases, individuals with TCS have other affected family members, but it can also be seen in families with no history of the condition.[1]

The severity of underdevelopment of the facial bones in people with TCS is highly variable, even between affected family members.[1] This variability can lead to difficulty diagnosing the condition, especially in those who are very mildly affected. However, there are a number of characteristics commonly seen in individuals with Treacher Collins Syndrome which are used to help establish a clinical diagnosis. It is important to note that the physical features of the condition are present at birth.[4]

Diagnosis of Treacher Collins Syndrome is typically made at birth (though sometimes prenatally, and sometimes after childhood) using a combination of physical observations, genetic testing, and radiographic or computed tomography scans.[1] [2]

Treatment and care for individuals with Treacher Collins Syndrome requires input and coordination from a number of health professionals, including Craniofacial Surgeons, Otolaryngologists, Opthalmologists, Orthodontists, Psychologists, Speech Pathologists and more. Children with this condition will often need to undergo multiple surgeries to help with respiratory function, hearing, and proper feeding and nutrition, as well as for reconstructive reasons. The following is a list of common health concerns and/or medical interventions aimed at treatment for individuals with TCS.[1] [2] [5] 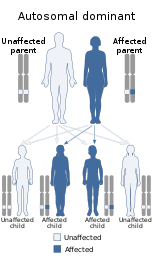 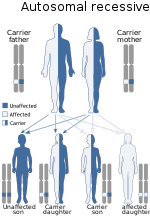 Autosomal recessive inheritance (Affected individual can be male or female).

Treacher Collins Syndrome is a genetic condition caused by a change in one of three genes. Genes are what make up our genetic information (also known as DNA) and can be thought of as a set of instructions that are used to make proteins and perform all the tasks that the body needs in order to function. Changes or variations in the genes can sometimes result in changes to the proteins, which may not function normally.

The vast majority (over 90%) of individuals with Treacher Collins Syndrome have a change in one copy of the TCOF1 gene, located on chromosome 5. TCOF1 provides instructions to make the Treacle protein, which is essential for the proper development of the facial bones.[7] Variations in two other genes, POLR1D and POLR1C, are also known to cause TCS. All three of these genes play a role in the production of ribosomal RNA (a molecule that helps to build other proteins) and are thought to cause TCS by lowering the amount of ribosomes during a critical timepoint in early development.[8]

Humans typically inherit two copies of each gene, with one copy coming from the mother and one from the father. Treacher Collins Syndrome is an autosomal dominant condition when it is caused by changes in the TCOF1 or POLR1D gene.[2] This means that having a change on only one copy of the gene is enough to cause the condition, and that a person with TCS has a 50% chance of passing on the gene variant to any children they may have. Approximately 40% of individuals with TCS inherit the gene change from an affected parent. Sometimes a parent may have a very mild form of TCS and may not have been clinically diagnosed prior to the diagnosis of a child. In 60% of people with TCS, the gene change is not inherited from either parent and is brand new in the affected person (this is also called a de novo change).[2]

A small proportion of people with Treacher Collins Syndrome have changes in the POLR1C gene. In these cases, the condition is inherited in an autosomal recessive manner, which means an individual must have a change in both copies of the gene in order to be affected.[2] People who have a change in just one copy of the POLR1C gene are called carriers.

Because Treacher Collins Syndrome is a genetic condition, people affected with or who have a family history of TCS are often referred to a Genetic Counsellor. These are health care professionals who work alongside Medical Geneticists and other medical professionals, and who are specially trained to help individuals and families understand and adapt to life with a genetic diagnosis. They can help interpret medical information, discuss recurrence risks, review options such as genetic testing, and provide support to people as they navigate difficult decisions.

Individuals and families who are suspected of having TCS are often referred to a Genetics clinic in order to facilitate genetic testing, as well as discuss the implications of the condition. Genetic Counsellors will pay close attention to the family history to determine whether there may be other affected individuals, or the potential for recurrence in future children. Because there are more than 130 distinct gene changes known to cause TCS, the first task is often determining what (if any) the specific gene change is, and whether it was inherited from either parent. In 60% of affected people, neither parent will have a change, and the condition will have appeared for the first time in that child. In this case, the chance of these parents having another affected child is extremely small. However, in 40% of affected individuals, there is also an affected parent (even if only mild in severity). When individuals with Treacher Collins Syndrome have children, there is generally a 50% chance of each child also having the condition. In this situation, some people may decide to do preimplantation genetic testing (testing an embryo before it is implanted into the uterus) or invasive prenatal testing to look for the specific gene change seen in the parent. One of the difficulties with this form of testing is the high variability in severity of TCS symptoms, and the inability to predict how an individual will be affected by the condition. Prenatally, ultrasound can be used in addition to genetic testing in order to better inform pregnancy management.

Children, adolescents, and adults with facial differences such as Treacher Collins Syndrome are often at higher risk of lower self-esteem, peer acceptance, and social skill development.[9] They also have additional medical or health services needs as a result of potential hearing loss, visual disability and speech problems. Genetic Counsellors can work with individuals and families to help facilitate appropriate access to resources and services that may benefit those affected by the condition.

Foundation for Faces of Children

If you are interested in connecting with a Genetic Counsellor in Canada or the US, the following links can be used to find clinics near you: