Introduction to Citizen Science on Conservation

Citizen science, active public involvement in scientific research, has assisted scientists for hundreds of years [1]. The volunteer work put into scientific research has affected many fields such as conservation, ecology, biology, and environmental monitoring.

Data collected by volunteers is expanding the scope of scientific research.

Data collected by volunteers is expanding the scope of scientific research. The substantial information gathered by citizen science projects allows scientists to focus on analyzing trends and, if problems are discovered, work towards finding solutions. Furthermore, the data collection process is not only beneficial to the scientists, but to the citizens as well. Citizen science projects invite everyday people to be involved in ecological research in their own neighbourhoods, which can result in a greater understanding of the ecosystem they volunteer in, improved science literacy, and sense of place among community members [2]. With the increase in concern about environmental issues in the mid-late 20th century, there are more and more opportunities for citizen participation in conservation projects. These projects promote environmental awareness, and reconnect people with the nature in their community. At the same time, the participants are helping to conserve the nature in their backyards.

While the benefits are great, there is still need for caution when dealing with citizen sciences. One of the main concerns is a general mistrust of citizen collected data. Gathering scientific data can be difficult, and information can be skewed by civilian perspectives[3]. Citizen science has multiple variables that can change the data results of any project. For example, the different motivations between participants and their knowledge of the desired field of research [3].

In 2017, UBC researchers set out to test the quality of data collected, and if, or how, citizen perspectives can alter data outcomes [3]. The goal was to assess accuracy of water quality analysis between scientists and volunteers. Six sampling vignettes were addressed during the test: participation as education, interpreting data after a major event, assessing effects of development, reconciling water quality parameters to context, citizen placed centrism, and determining outliers [3].

A group of participants were recruited from the university community, as well as reaching out to leaders from the surrounding municipalities who were concerned about water quality management and watershed [3]. Each participant was given a sample kit with tools for water quality analysis, sample preservation, and recording data [3]. Instructions were given on how to carry out the collection and analysis of water samples correctly, and participants got to work [3]. Of the 221 sample kits sent out, 145 were returned wth water sample [3]. After all data was gathered and analyzed, comparisons were made between distribution of citizen vs scientist data.

With each addressed vignette, lessons were learned. There was plenty of overlap in concerning variables among the vignettes.

The lessons identified from this study were as follows [3]:

The study discovered plenty of potential issues with citizen science. However, the focus of this study was on analysis on top of collection of data. If analysis is left up to the scientists, there is still a great potential for benefit with citizen science. As long as a program gives proper supervision and training, citizens are used with the correct type of project, and volunteers have a passion towards conservation, citizen science can be a valuable asset to scientific research.

History of Citizen Science and Conservation in Vancouver

Volunteer surveyors counted all visible birds at the predetermined sites.

The Coastal Waterbird Survey was established in 1999 as a long-term monitoring program to assess natural and human impacts on BC's coastal bird populations [4]. This volunteer based project is administered by Bird Studies Canada (BSC), with the support of Environment Canada and Canadian Wildlife Service. The birds that inhabit Vancouver have international importance. Due to the productive inshore marine and tidal habitats, there are incredibly high densities of seabirds and waterfowl with migratory patterns along the pacific [4]. At the time of survey's foundation, the human population along the coast was estimated to double in following 20 years. Substantial development of the area was imposing great stress on the environment. Scientists knew that if these pressures were left unchecked they could put the ecosystems at risk.

The first survey was conducted in the winter of 1999-2000. On the second Sunday of each month, within two hours of high tide, volunteer surveyors counted all visible birds at the predetermined sites [4]. Volunteers then submitted their data either online or manually through standard recording forms [4]. During the first 5 winters there was more than 400 volunteers contributing, and a total of 6,300 surveys recorded [4]. Along with the actual data collection and analysis over these years, the survey power, ability to detect trends, of this project were assessed [4]. Conditions of data usage were put in place, and only sites with 100% monthly coverage for specific species survey window were used in analysis [4]. After these changes were applied, only 9 of the 58 commonly recorded species could be used to monitor trends [4].

Now, latest data states a total of 25,944 surveys, and 1,413 volunteers [5]. The survey power of the project has greatly increased, with 57 bird species being monitored and their quantity recorded for population trend analysis. Conservation scientists can now see declining and increasing bird populations, and study why these changes are occurring.

The Stanley Park Ecology Society (SPES) is a registered charity that has been active since 1988 [6]. It was originally named the Stanley Park Zoological Society, but after the park's zoo closure in 1995, the name was revised. However, the society's focus still lies on education, conservation, and outreach programs [6]. SPES is currently the primary steward of Stanley Park. 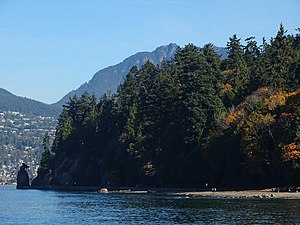 The combined efforts by citizens and scientists in Stanley Park have produced promising results for the conservation of the park.

There are many ways citizens can get involved in conservation in Stanley Park. Whether it be invasive plant removal, wildlife monitoring, or even adopt a nest; there will always be work to do in the park [7]. Along with these opportunities, there is a citizen science project undergoing. In 2006, a severe windstorm hit the park with around 10,000 trees being damaged [8]. This catastrophe caused the need for considerable restoration work and shed light on the insufficient data of the park's ecosystems and ecological integrity [8]. The State of Ecological Integrity in Stanley Park Report (SOPEI) was created to begin gathering the information needed to repair and maintain the parks health. Years later, volunteers and educated conservationists are reporting on the ecological health of the park using similar reports as Parks Canada for National Parks [8]. The goal of this project is to contribute data to the Stanley Park Master Plan, and continue working towards restoration and maintenance of the park. The SOPEI is a massive peer reviewed report, with more than 30 writers/editors, Over 200 pages, and a combination of 81 tables and figures [9]. It includes information on every terrestrial, aquatic, and native ecosystem, as well as records of almost every species in the park[9]. The report comprises of biophysical inventory, current stresses on each ecosystem, environmental change indicators, and future recommendations [9]. The combined efforts by citizens and scientists in Stanley Park have produced promising results for the conservation of the park.

Projects around the World

This program by the Smithsonian Migratory Bird Centre located in Washington, DC is designed to increase knowledge about avian ecology, and promote citizen interest and awareness in local conservation initiatives [2][10]. From first being established as a pilot project in 2000, the program has expanded in several regions through the years 2012 to 2017 to stretch from Springfield, MA to Gainesville, FL [10]. Research is focused on annual survival and reproductive success of individual species across a range of environmental disturbances as reported from participant data [10]. Not only has this program greatly assisted scientists in areas of urban ecology and conservation science, but participants in this program documented greater change in personal attitudes towards birds and the environment after becoming involved with Nestwatch in comparison to other citizen science programs [10].

Established in 2017 by the University of Adelaide, Echidna CSI the first Australia wide echidna distribution map to provide details on how wild populations are affected by changing environments [11]. Interested citizens can report wild echidna sightings, as well as send in scat samples for scientists to compare to captive populations in order to provide insight into echidna biology and their role in the environment [11]. This conservation science initiative aims to serve as an outreach platform to educate and engage the local community about biodiversity, environmental awareness and interdisciplinary research applications in conservation and animal behaviour [11]. More than 5000 users are engaged in this network with over 2800 sightings recorded and 200 scat samples sent in [11].

FrogWatch USA is a citizen science community program established by the Association of Zoos & Aquariums (AZA) in 1998 [12]. This program was established in order to educate individuals and groups about wetland ecosystems and the decline of frog and toad populations in the United States and assist scientists in understanding the scope, geographic scale and cause of these declines in order to contribute to amphibian conservation efforts [12]. Members of this citizen science program are trained volunteers who listen for frog and toads during the evenings through the months of February to August and report their observations to the online database developed by the National Geographic Society [12]. To engage individuals, FrogWatch USA has an expansive network of AZA-accredited chapters across the United States [12].

Citizen science is a excellent method to actively involve civilians with environmental issues and change attitudes and understandings, as well as assist scientists in collecting data for conservation efforts. Not only does this expand the scope for scientific research, but it also provides citizens with a sense of place within their community members through education and reconnection with nature.

There is a general mistrust in regards to citizen collected data as information can be altered by civilian perspective and affect the project. However, despite these issues, programs that leave analysis to scientists and provide their volunteers with proper supervision and training can be a valuable asset to scientific research.

Within Vancouver, there has been very promising conservation results because of the contribution of citizen science. The British Columbia Costal Waterbird Survey relies volunteers to report on all visible birds species in order to monitor urbanization affects on their habitat. Beginning with 6300 surveys recorded, scientist were able to assess only 9 of the 58 commonly reported species to monitor trends. Growing over the years to 25 944 surveys recorded, now 57 bird species are being monitored. The Stanley Park Ecology Society also heavily depends on citizen science contributions for restoration and maintenance of the park, as well as collecting data on the park's ecosystem and ecological integrity.