Course:CONS200/2020/Threats to the practice of shifting cultivation among indigenous groups in the Amazon

There are currently around 305 Indigenous tribes living in Brazil today, made up of about 900,000 people. These Amazonian tribes serve a crucial role in preserving biodiversity in the Amazon. Indigenous peoples currently occupy 13% of Brazil's land mass, 98.5% of this reserved land lies in the Amazon. However, Indigenous lands are currently under massive pressure from outsiders. [5] Along with shifting cultivation, other aspects of Indigenous culture and traditional way of life are under threat from large-scale forest clearance. [1]

Deforestation in the state of Rondônia in western Brazil

The Amazon is currently the biggest deforestation front in the world. WWF estimates that 27 per cent of the Amazon biome will be without trees by 2030 if the current rate of deforestation continues. [6] Shifting cultivation is a practice which requires large plots of land. The deforestation in the Amazon is occurring to make space for roads, and urbanization. This leaves little to no room for Indigenous populations to practice their centuries old method of agriculture. [7]

Indigenous peoples in the Amazon have been practicing shifting cultivation for centuries. Over these centuries, ample land was available for this practice, allowing for safe and sustainable use of this method of agriculture. Since European colonies arrived in Brazil over 500 years ago, the tribal Amazonian peoples have experienced large-scale genocide, and the loss of rights to most of their land. [8] Due to decreasing land area available to Indigenous groups, clearing cycles within the practice of shifting cultivation have been forced to shorten. This means that plots of land are being allotted less and less time to recuperate after being cleared. This is decreasing the effectiveness and sustainability of the practice. [9] Without this practice, Amazonian tribes are unable to grow or provide food for their community. This devastates communities without access to alternative food sources.

Sustainability of the Practice

Without the ability to practice shifting agriculture the way that it is meant to be practiced due to deforestation and land loss, the practice itself is negatively impacting the rainforest ecosystem. Clearing cycles are shortening, causing tough grasses which can tolerate the shorter clearing cycles to replace the rainforest's natural foliage. [9] This diminishes biodiversity in the Amazon - making shifting agriculture a damaging practice. The now damaging nature of the practice leads to further issues for Indigenous peoples and the continuation of their native agricultural method. Local governments, NGOs and private organizations see the damage caused by the practice, but fail to see that it is their land management and deforestation issues which have created the constraints that make shifting cultivation damaging to the environment. If local governments, NGOs and private organizations were able to provide adequate amounts of land for Indigenous groups in the Amazon, shifting agriculture would not pose a threat to the Amazon rainforest's biodiversity, and Amazonian tribes could continue their traditional agricultural practice.

Several methods of conservation are currently being implemented to rectify the harm that has been caused to Indigenous agriculture practices in the Amazon. While they have varying levels of success, some types have brought positive changes as they support Indigenous groups and promote conservation. 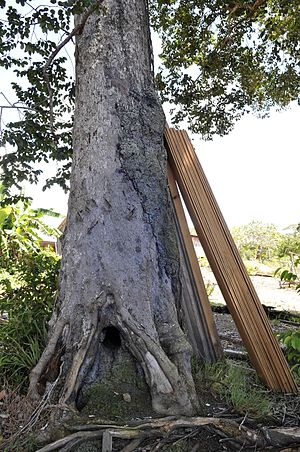 Payment for ecosystem services projects attempt to support local communities and economies through monetary compensation for conservation [10]. The projects attempt to decrease resource and ecosystem degradation that would otherwise have little to no regulation [10]. Amazonian PES Projects have seen different levels of success. The pilot Proambiente PES Program in Brazil was one of the first of its kind[11]. It incentivized local landowners and farmers to manage their land in a way that sustained and/or generated ecosystem services that would otherwise be depleted from agriculture[11]. Those in the program were payed to do so, but the program was not able to supply as many funds as was originally planned, and not everyone in the program was compensated to the extend they had been told they would be [10]. In addition, the project found that conserving ecosystem services greatly reduced the income of the farmers as reducing their environmental impact lowered their agricultural outcomes[11]. Although there were some benefits to Brazil's Proambiente project, the overall failure of it can be attributed to a lack of collaboration on all levels of implementation, conflicts with previous policy, and insubstantial funding [10]. The success of payment for ecosystem service projects is largely dependent on the details of the particular project.

A protected area within the Peruvian Amazon

Economic globalization has had a profound effect all over the world; it has brought about trends of decentralized government. While this can have good implications for many countries, it can be a different case in regard to developing countries like Brazil. Contained within Brazil is the largest portion of the Amazon rainforest. A decentralized government means that forests that were formerly managed by federal governments have been transferred to be managed by local governments, NGOs and private organizations. This can have dire consequences for the preservation and conservation of natural resources.

In many cases the newly privatized management of the land results in careless deforestation without the consent from the local inhabitants and community as a whole. This deforestation leads to the degradation of resources upon which Indigenous peoples rely on. Without the land available for the Indigenous, they are unable to grow food for their community. This can be devastating for communities which have no other food sources. In addition, the newly privatized management may improperly remove the inhabitants. [15]

The amazon rainforest is of major significance to the reduction of greenhouse gases. 78% of Brazil's greenhouse gas emissions result from land-use change, two-thirds of which is occurring in the Amazon area.[10] While Brazil is historically one of countries with the highest rates of deforestation, their annual deforestation rates declined notably between 2004-2012, specifically. Many factors contributed to this decline, but the government's Action Plan for the Prevention and Control of Deforestation in the Legal Amazon (PPCDMa) was largely responsible. This action plan "supported a series of integrated conservation activities divided into three thematic areas: (1) territorial planning and land tenure, including the creation of protected areas; (2) improved monitoring and law enforcement; and (3) incentives for the sustainable use of natural resources."[10]

This section will focus on Brazil's improved monitoring and law enforcement. A major component of the monitoring of deforestation has been the use of satellite-based warning systems which capture and then process images in which land-change has been detected. This system has been immensely helpful in reducing deforestation by alerting authorities where they should send law enforcement. Because the satellite system led to less large areas being deforested, the system had to be further developed to the point of which it has the capacity to detect smaller-scale deforestation in addition to it's initial capability of detecting large-scale deforestation. This technology led to the reduction of deforestation rates between 2010-2011 of 14%.[16] This system has been effective in more ways than one, as it doubles as a method which may deter deforesters out of fear of an enhanced risk of getting caught.

This method of protecting the Amazon rainforest is promising in preserving the Indigenous' practice of shifting cultivation. With increased government monitoring, there will be a reduced threat of companies or individuals illegally taking over Indigenous-owned land.

Shifting cultivation is an agricultural practice which has been utilized by Indigenous peoples in the Amazon for centuries. Threats such as deforestation, legal pressures, and sustainability issues caused by land-use changes have lead to a decline in use and efficiency of this practice. Amazonian tribes have suffered greatly due to the changes to their land and subsequent changes to their culture and traditions. To help repair the damage done, conservationists are consulting several different options for conservation such as payments for ecosystem services, community based forest management projects, community based capacity-building projects, and increased police monitoring. Other legal avenues for repair of this situation may also be considered. The remediation of this issue is vital for the preservation of the livelihoods of Indigenous residents of the Amazon.

Note: Before writing your wiki article on the UBC Wiki, it may be helpful to review the tips in Wikipedia: Writing better articles.[17]