Sex-selective abortion refers to the act of aborting a fetus because of its gender. This can apply to both male or female fetuses, and is a common practice in parts of Asia such as India, China, and Korea.[1] Specifically looking at the Republic of India, female-selective abortions are common practice as girls are perceived as significantly low in value, and that sons are of much greater desire for most parents. Although abortion has been legal in India since 1971, it was not until January 1st 1996 that using sex-selective technology was banned in the use of determining the gender of a baby.[1] Presently, it remains illegal to disclose the sex of a fetus to the expecting parents, yet this has not stopped medical personnel from revealing this information, allowing thousands of gender-based abortions to continually happen every year. In fact, an estimate of over 100,000 female-selective abortions following some sort of gender revealing technology have been performed in recent years.[2]

A common term within this field of study is a sex ratio, which is the ratio of males to females, or of females to males (depending on the country in question) in a specific population. Because it is normal for more males than females to be born, a typical sex ratio is around 105 males to 100 females.[3] However, research has calculated India's sex ratio in children under seven is extremely high in favour of males, and is even increasing. In 2001, the ratio was 107.8 males to 100 females, which was an increase from 105.8 in 1991 for India as a whole.[2] This ratio becomes even higher when considering specific states as well, such as Gujarat (113.9), Haryana (122.0), and Punjab (126.1).[2] Although these numbers may seem small in that the biggest difference is only about 18 male babies from the norm, it is important to keep in mind that this is only per 100 females, and considering India is one of the most densely populated countries in the world with over one billion people, this 18 gets multiplied very quickly. These states individually have also seen a drastic increase since 1991 as Gujarat went from 107.8 to 113.9, Haryana from 113.8 to 122.0, and Punjab from 114.3 to 126.1 which symbolize a constant and large augmentation.[2] Although laws have passed since 1991 and today it is illegal to use sex-selective technology for gender discriminatory purposes, this increase can be attributed to the actual innovation and accessibility of these technologies such as amniocentesis and ultrasound. It is an ancient belief in India that sons are the desired sex of children, and is something that is deeply ingrained into the culture.[4] Interestingly enough, 'Venda' is a common name for girls in India, which means "don't want", and 'Podum Pennu', which means "enough of daughters".[4] Women are thought of as burdens in Indian culture for many reasons, but most specifically for her future dowry. The Dowry system in India is an age-old tradition within the culture that entails the family of the bride paying thousands of dollars and/or property privileges to the husband and his family. This is seen as the woman's family's final act of duty before handing her off to the man's family to keep under their responsibility.[5] Other reasons why daughters are devalued is besides their financial burdenship, they are also seen as social liabilities as the parents must worry about protection of her chastity, and concerns about her marriage arrangements in so that she does not shame her family.[5] Even well-off families who have no issues affording dowry payments still resent female children as the husband will expect a part of their family property.[5]

The North and South regions of India can be analyzed separately in their views of gender discrimination as women are seen as lower status in the North and of higher status in the South. Parts of the South view marriage payments as something that should be more equal between the bride and the groom, relieving some financial pressure off of the woman's family, and there is also less vulnerability and seclusion of women.[6] Further, women here are offered more opportunity for education and literacy which is part of why they are regarded in higher standing than in the North.[6] Because it is also expected that adult sons are to provide support to his parents in his adulthood, couples will often express son preference for this reason as well.[1] This can be attributed to the fact that women are not offered the same equality in job or career opportunities as men, nor are they granted equal pay, leading to less assurance that the parents will be able to depend on them for economic stability. 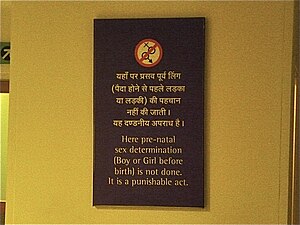 Amniocentesis was the first breakthrough in being able to determine the sex of the fetus, and became known in India in the 1970s.[2] This type of technology was first introduced as a means of being able to detect genetic abnormalities through taking samples of amniotic fluid, and then slowly became used very commonly as being able to disclose the gender to the parents.[2] Other ways to determine the sex of a fetus include ultrasound, and chronic villus sampling which have all come to fruition since the 70s.[1] Ultrasound may be the most common to many, as it is the cheapest and is offered at many prenatal facilities involved in regular check-ups of the baby. Cost is a big factor that comes into these types of technologies, as they are seen as a much more logical and financially-sound decision than carrying to term a baby who then may cause them financial burden or hardship. Whereas an ultrasound can cost between 500 and 1,000 rupees, which equates to around $9.00-18.00 CAD, amniocentesis can be double that price or more.[2] Not only this, but if the baby ends up being a girl, the parents could end up paying hundreds if not thousands in dowry payments and property shares. In this case, many see pre-birth gender revealing as a "good investment".[2] There is even a saying that translates to "spend rs500 now, save 50,000 later" which essentially means if you spend the 500 rupees now, you will be saved from spending 100 times that amount in future dowry payments.[1] Because of this common belief, ultrasound technology is quite ubiquitous throughout India, and is offered in clinics covering almost all reaches of the country who not only provide the illegal gender-revealing technology, but even advertise that they do so.[2] There have even been sightings of posters put up in public places such as train stations that advertise these services for outrageously cheap amounts, even as little as 70 rupees.[1] Even though the law was passed making sex-determination services illegal, companies still advertise that they do it as they know this does not defer parents from seeking the tests. Further, the fact that these medical personnel continue to disclose genders to their patients, as well as businesses having advertisements up in public sectors communicates the fact that the government does not carry out any action to stop this. The demand for this technology is so rampant that ultrasound vans or other vehicles have been seen travelling to more rural areas of India where sanctioned or more expensive clinics may not be available to all the expecting parents in those regions. The Medical Termination of Pregnancy Act was the first law passed in India that made abortion legal in 1971.[2] This Act outlined the conditions under which a woman is allowed to legally obtain an abortion including reasons such as endangering the mother's life, causing her serious mental or physical harm, the pregnancy being the result of a rape, the birth leading to a child with serious physical or mental deformities, or the pregnancy being the result of a contraceptive failure if that woman is married.[2] The Act is also very strict on where the abortion is performed, and by whom. In other words, even if the abortion met one or even all of the above reasons, it could still be deemed illegal if it is not done in a sanctioned medical facility by a professionally trained medical practitioner. There are also specific timelines that must be followed, in that if gestation is under 12 weeks, the abortion must be approved by only one medical practitioner, but if it goes beyond 20 weeks, two must approve it.[2] After the introduction of gender-determining technologies in the 70s, the government then banned these tests for the singular purpose of revealing the sex in 1976 however this was not applicable in the private medical sector, which then continued to provide these tests until the 90s.[2] It was in 1996 that the Act known as the Pre-natal Diagnostic Techniques Act was fully implemented in the entire Republic of India which outlined the illegality of using ultrasound and amniocentesis technologies to predetermine the sex of a fetus.[2] What is interesting is that despite these illegalizations of sex-selective abortions, female sex ratios continued to plummet as seen in Figure 1. The research shows that around the year 1961, the sex ratio of females to males under six years old was about 976 to 1000 and by the time it gets to 2011, the ratio is significantly lower at only 914 per 1000.[3] What this means is that even though the government inputted policies in hopes of helping the female infanticide epidemic, this did not stop parents to reach their goals of child preference. Some statistics even estimated that in Pune, a western city in Maharashtra, sex-selective tests were performed prior to every one in six abortions carried out.[2]