Electoral Reform is the reform to a new electoral system to more accurately represent or translate societies desires from the vote.

Currently, Canada uses a single member plurality electoral system, also known as first-past-the-post. This system allows the person and party with the majority of the votes to gain a majority of the seats in government. In Canada, there are 338 seats up for election in the House of Commons[1].

This system is designed to create majority governments and is a very stable form of government because a single party is able to advocate on behalf of Canadian citizens. There is a minimal amount of decisions of policy that require cooperation from two or more parties because the majority is able to pass policy and govern without the absolute support of the opposition parties.

Single member plurality or first-past-the-post permits artificial majorities from mere plurality and so those parties get to govern Canada as though they got the support of most voters[2]. The seats afforded to the party that received the majority does not accurately reflect the Canadian vote which creates a vote to seat distortion[3]. Single member plurality systems also favour larger, more commonly know parties (ie. Liberals and Conservatives) which underrepresent women and minorities[3]. Some have gone so far as to say that single member plurality no longer fits with Canadas democratic values[3]. 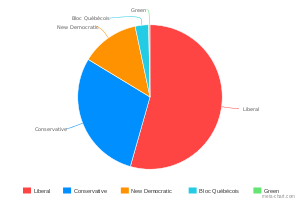 In the 2015 Canadian Federal election, the Liberal party of Trudeau received 39.5% or votes yet the Liberal party was awarded 54% (184 seats) of the total seats[1]. The Federal Green party of Canada received 3% of the votes yet 0% of the seats[1]. Single member plurality might create stable governments however, it does not accurately represent the multitude of diverse beliefs of Canada from the vote.

Proportional Representation allows parties to nominate a list of candidates rather than just one[4]. Proportional representation systems do not often produce majority governments but instead, cooperative governments that must work across party lines to ensure the government functions properly. The vote to seat ratio is almost at parity which means if a party were to receive 30% of the vote, they would receive roughly 30% of the seats.

Parties are able to nominate lists of candidates and not just single candidates which allows for more choice in diversity of candidates to vote for[4]. The elected government more closely represents the way society voted; if a party receives 30% of the vote, they receive 30% of the seats

Under proportional representation electoral systems, it is seldom that a majority government be elected. It is argued that governments that do not have a majority are less stable and harder to manage because parties must work more closely together to collectively decide matters for their citizens.

What Does Electoral Reform to Proportional Representation Mean for Minority Groups?

In governments and elections where there is more descriptive representation of race, ethnicity and gender, political involvement increases[5]. Proportional representation systems allow for more descriptive representation of intersectional diversity and thus create more political involvement. On average, women are more likely to vote for women candidates in elections[6]. However, the majority of these studies do not account for other intersections attributing to women's voting patterns. Other studies demonstrate that gender is not always the most significant identity trait for determining who a demographic is most likely to vote for[5]. White women typically prioritize gender over race when voting for a candidate[5]. On the other hand, African Americans, men and women alike, are more likely to vote for an African American candidate rather than a candidate with the same gender identity[5]. Women on average are also more likely to support social policy and the welfare state however this study did not account for intersections in women's identities[6].