Please review the video below: Does it serve as a suitable introduction to the topic?

RIIA's definition of Illegal Logging is framed by the assertion of Nation-State sovereignty: ‘Illegal logging takes place when timber is harvested, transported, bought or sold in violation of national laws. The harvesting process itself may be illegal, including corrupt means to gain access to forests, extraction without permission from protected areas, cutting of protected species, or extraction of timber in excess of agreed limits. Illegalities may also occur during transport, including illegal processing and export, misdeclaration to Customs, and avoidance of taxes and other charges’[1]. 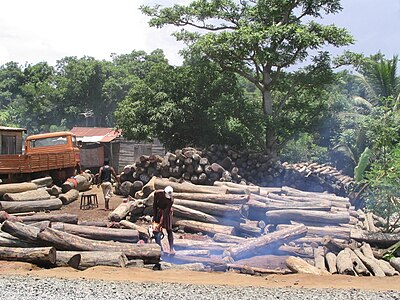 Many Indigenous Peoples and Local Communities (IPLCs) approach Illegal Logging as logging that takes place on their claimed customary lands, without first obtaining their Free, Prior and Informed Consent (FPIC)[3] and without equitable Access and Benefit Sharing (ABS) from logging. Many IPLCs claim pre-existing rights to the forestlands that are claimed and administered as Crown Forests or State / Public Forests. For those IPLCs, the State-issued logging concessions represent a violation of Native Title, and an illegality. Arthur Manuel, member of the Secwepemc First Nation of Canada, is the Chairperson of INET[4]. Arthur Manuel campaigns against an example of Illegal Logging in British Columbia and Canada in provincial, national and international forums. INET maintains that softwood lumber from British Columbia, being sold in the United States, is unfairly subsidized, because the Province of British Columbia has not internalized the costs of Aboriginal (Native) Title property interests and environmental measures to protect Aboriginal land-uses in the price of the B.C. forest products.

Other Aboriginal representative groups have taken the same position, including the Assembly of First Nations[5] and The Grand Council of the Crees[6].

Illegal logging is worth US$ 3,500-10,000 million (US$ 3.5-10 billion dollars) annually. Interpol has the higher estimate[7]. Most forested countries have some degree of illegal logging, in some countries illegal logging is much larger than the legal business (Alison Hoare at RIIA 2015 for table of researched countries). Major players also involved in other global criminalities – drug smuggling, gun running, people trafficking[8].

A problem since ancient times, mentioned in the Epic of Gilgamesh (in Assyrian cuneiform on clay tablets about 4000 years ago). Takes place in relatively remote areas, is relatively difficult to detect, products cannot easily be separated from legal logging. There are multiple beneficiaries of illegal logging, from producers to consumers all along the market chain, enjoying the lower financial costs of the wood and neglecting the higher economic costs. Environmental, fiscal and social costs are socialised (everyone pays) while benefits are privatised. There are multiple losers, when environmental damage in uncontrolled illegal logging is ignored or paid by society at large. Social costs are invariably high: social cohesion is disrupted, criminals benefit, the rule of law is undermined, quality of governance is reduced and subverted.

Profit margins can be so gigantic that bribes can easily be paid to anyone who objects[9]. Tropical timbers deliver US$ 40/m3 (cubic metre) to the tree feller, cost US$ 80/m3 at the roadside and US$ 120/m3 containerised at shipside, are declared for Customs taxes paid at US$ 150/m3 and are valued at import for China Customs at US$ 900-1000/m3 for delivery to factories for conversion into luxury furniture and flooring. The log trader has made 100-300 per cent profit before the outward-bound ship even leaves the dockside[10]. Hence assassination of government Ministers and forest conservation staff if they get in the way of this business.

Unjust laws and selective (biased) application of laws may make illegal the traditional uses of forest resources. It is common for central governments to award logging licences (concessions) to private enterprises to harvest from officially declared State Forests. These State Forests may be superimposed on the customary lands of traditional and indigenous peoples, by fiat under eminent domain. When the local people exert their traditional rights, they risk conflict with the private enterprises licensed by government to harvest from the same lands. Under international law and UN human rights conventions, the rights of the local people take precedence but local government may ignore those rights and may instead prosecute and imprison the local people.

When / what are the date(s) when that ownership was asserted?

Are there other constituency groups who claim ownership or rights to those forests? If yes, name them.

How are those constituency groups contesting the claims of the owners designated as legal by governmental authority?

Give an example of illegal logging in the forests in the region or country where you are located?

Where can you find an example of a possible output from illegal logging in your dorm room / apartment? Describe the chain of custody and legality verification claims.

How did the illegal logging problem develop? Describe similar or related historical problems.

Questions for students to consider

What does the phrase ‘Nature’s Bounty’ mean?

What does ‘fall-down’ mean in terms of logging in Canada?

What are the consequences for an ecosystem when selective illegal logging removes all the seed-bearing trees of specific commercially-desirable species?

What are the consequences for an ecosystem when ‘Nature’s Bounty’ is liquidated or degraded through illegal logging?

What are the arguments used to justify clearcut logging?

What does ‘variable retention’ mean in reference to logging in Canada?

What are the consequences of ‘variable retention’ for ecosystem resilience?

Illegal loggers and log traders rely on their own smart staff or their cronies in government agencies who can devise ways of evading the government laws and regulations and administrative procedures related to logging and log trading. In many countries of the global South, external consultants engaged by the World Bank and other donor countries probably drafted the laws. Those laws may be difficult to find, and hardly anybody refers to them . So illegal loggers and log traders benefit from stakeholders’ lack of knowledge of laws, policies, regulations and procedures.

Describe: governmental jurisdiction over this issue; dilemmas for lawmakers; current laws/precedents related to the problem

Global industrial wood production of logs was about 2,052 million m3 in 2014, with exports of 135 million m3 declared at US$ 19,000 million (average of US$ 138/m3). Of 273 million m3 of tropical timber logs, 20 million m3 declared at US$ 7,000 million were exported (average of US$ 353/m3). The main tropical producers were Indonesia with 63 million m3, India with 44 million m3, Brazil and Malaysia each about 31 million m3. About 60 per cent of production was illegal in India, more than 50 per cent in Brazil and 35 per cent in Malaysia. More excitingly, Congo, Ghana and Papua New Guinea each rated 70, Laos 80 and the Democratic Republic of Congo more than 90 per cent illegal [13]. So the illegal tropical timber log trade in 2014 was worth around US$ 3500 million, probably very much more. No wonder the major criminal gangs are attracted to participate in this business[14].

With such huge profit margins, around US$ 200/m3 before the shipping containers leave the port of origin, the illegal logger or log trader can easily afford to bribe anyone -- from chainsaw logger on the forest floor, to community forestry association president who will 'rent' the requisite paper documents necessary to 'launder' the log shipment, to the forest wardens and forest guards at checkpoints along the route to the port, to the Customs and Trade officials at dockside, and so on.

So what is driving this illegal trade? A major influence is the desire in Northern countries for cheap consumer products[15]. We like cheap plywood and composite boards and doors and window frames. We enjoy beautifully hand-carved furniture made from highly-coloured tropical timbers. We put up vast numbers of pale-timbered shelves derived from Siberian forests. We prize giant boardroom tables and impact-resistant patterned wood floors in hard, heavy and very-slow-growing timber. At current rates, the tropical ‘red woods’ used to make hong mu furniture in China[16] and to panel the board rooms of US conglomerates with mahogany[17] will be exhausted in a decade.

Three-quarters of the world’s forests are claimed as State-owned and -administered forests. However, long before Nation-States came into existence, many of those forests were the homelands of Indigenous and Tribal Peoples (ITPs) who continue to lay claim to their inherent rights to their lands, territories and resources (LTR). Traditional- or Local Communities also assert rights to forestlands, based on their dependence on forestlands for principally livelihood or subsistence reasons but they do not have the same length of association with particular forests as ITPs do.

For many Indigenous Peoples and Local Communities (IPLCs), their cultural practices and spiritual beliefs are inextricably associated with ancestral forests. Their origin narratives (‘creation myths) and other literatures are rooted in specific lands and territories, sometimes referred to in the literature as sacred or sacralised forests. In the cases where IPLCs are located in frontier regions, far from arterial roads or navigable rivers, their claimed lands, territories and resources (LTR) are protected, whether those LTRs are legally recognized by the Nation-State or not. However, as resource extractive activities continue to expand into the LTR of IPLCs, culturally significant forests are increasingly under threat.

Here is a link to a 5-minute video -- 'An Amazon tribe's deadly fight to save its land from logging' -- http://e360.yale.edu/feature/amazon_tribes_deadly_fight_to_save_land_from_logging/3024/

Additional sources on the positions of Canadian First Nations

What would a Forest Conservationist do?

What would a Legal Scholar do?

There are probably three levels of analysis that would follow:

Probably focus on the failure of the legal systems (national and international) to acknowledge ITP. The weakness of existing mechanisms and concepts such as FPIC (Free Prior Informed Consent)

At the international level - what safeguards or protections exist? Are they effective? Reasons for this? At the domestic level - what provisions for ITPs ownership or recognition? Do any confer a benefit that can be commercial or economic or only usufructuary? What avenues could ITP follow to try to enforce protection of their rights? Do they have 'standing' as against the State-enabled illegal logging?

Access to statute, case law and policy at the national level and then review and evaluation of the relevant international treaties and conventions.

What would an Economist do?