Hemochromatosis is a disease that is caused by an iron overload in the body. There are two types of hemochromatosis:

Individuals may initially present with general symptoms such as fatigue, weight loss, joint pain, weakness, and loss of energy. Physicians may make a diagnosis of hemochromatosis based on a physical exam (e.g. enlarged spleen, skin color changes) or a blood test which shows elevated iron or transferrin saturation levels.[1] Hereditary hemochromatosis (HFE-HH) can be classified as clinical, biochemical, or non-expressed. [2]

Clinical HFE-HH is characterized by excessive storage of iron in the liver, skin, pancreas, heart, and joints. If untreated, individuals can experience abdominal pain, weakness, and weight loss. If serum ferritin (iron in the blood) is higher than 1000 ng/mL individuals are at a higher risk for developing liver cirrhosis. Other complications include diabetes, congestive heart failure, and arthritis. Clinical HFE-HH is more common in men than women. [2]

Biochemical HFE-HH is diagnosed when the only symptom of iron overload is increased serum ferritin concentration and increased transferrin-iron saturation.[2]

In someone with non-expressing HFE-HH, there are no clinical or biochemical signs of the condition, despite the presence of disease-causing mutations. [2] 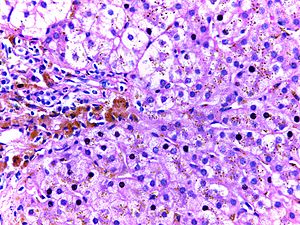 Iron overload in the liver tissue of a patient with hemochromatosis

The complications seen in clinical HFE-HH are the result of gradual iron overload. Iron that is over-absorbed by the gastrointestinal tract is slowly incorporated into tissues and organs. If the iron levels present in these tissues reaches a high enough threshold, the individual may develop hemochromatosis. Clinical symptoms of hemochromatosis do not usually begin until the 4th-6th decades of life. Possible complications of untreated hemochromatosis include organ damage, liver failure, liver cirrhosis, diabetes, heart problems, and skin bronzing. [3] The diagnosis of hemochromatosis is made based on a combination of the clinical features, blood analysis, liver biopsy and/or genetic testing.[6] Elevated levels of transferrin saturation with no other identifiable cause is considered to be the earliest sign of the disease.[6] By young adulthood, individuals will have elevated transferrin saturation, serum ferritin levels and abnormal liver function tests.[6] Measuring serum iron concentration alone is not considered to be a reliable marker due to natural fluctuations throughout the day.[6] Liver biopsies provide information about the level of iron overload and whether liver cirrhosis has developed.[6] If the physician suspects hereditary hemochromatosis, molecular testing of the gene that is most commonly mutated in adult onset hemochromatosis could be performed.[4]

Patients whose hemochromatosis has progressed to severe complications such as organ damage or liver failure have shortened life spans, however early diagnosis and treatment enables individuals with hemochromatosis to prevent these complications and have normal life expectancy.[4] Individuals diagnosed with clinical HFE-HH are treated with phlebotomy therapy to maintain serum ferritin (iron in the blood) at 50 ng/mL or lower. Individuals diagnosed with biochemical HFE-HH start phlebotomy therapy when serum ferritin reaches a level higher than 500 ng/mL. [2] Individuals with elevated serum ferritin levels can also consider blood donation as a method of maintaining iron levels. [7]

In clinical HFE-HH, once serum ferritin is lower than 50 ng/mL patients are monitored every 3-4 months and therapy is continued as needed. In individuals who already have liver cirrhosis, routine screening for hepatocellular cancer (HCC) is conducted. Patients with biochemical HFE-HH typically undergo annual analysis to ensure that the iron levels in their blood aren’t too high. [2]

Individuals with hemochromatosis are advised to avoid sources of additional iron. These include medicinal and mineral iron supplements, excess vitamin C, and uncooked seafood. Patients who have liver damage are advised to avoid alcohol consumption. Secondary complications can also be avoided by ensuring that individuals are vaccinated against hepatitis A and B. [2][7]

Since hereditary hemochromatosis is a genetic condition, family members of a newly diagnosed person are at risk of also being affected, or they may be mutation carriers. Once the mutation in a family is known, it is possible to offer molecular testing to at-risk individuals. The affected individual’s parents are mostly likely unaffected mutation carriers, although it is possible that they could be affected but undiagnosed. The affected individual’s siblings could be carriers or affected, and should be offered testing. In addition, an affected individual’s children will inherit the mutation, or could possibly have hereditary hemochromatosis if both of their parents are affected or carriers.[2] Genetic testing of children under the age of 18 is not recommended due to potential concerns about informed consent and genetic discrimination. [8]

There are several organizations in Canada and the United States that provide information and support to individuals and families affected by hemochromatosis. They also strive to raise awareness of hemochromatosis.