Since the beginning of the 20th century, the majority of the global population has migrated from rural to urban spaces. Cities, especially in developing countries, are experiencing rapid urbanization and massive population growth and are becoming “megacities” (population over 10 million) or “hyper-cities” (population over 25 million). Urbanization has led to massive increases in resource consumption and pollution, resulting in catastrophic environmental degradation; the effects of this are felt beyond the local scale. Discourse on sustainability is necessary because megacities cradle humanity’s future. We must aim to make these cities environmentally sustainable in order to ensure the well-being of current and future generations on a local and global scale. One of the biggest environmental challenges faced by growing cities is extreme levels of air pollution. This challenge is extremely prominent in Asian cities such as Guangzhou, China’s third largest city, which will be the case study for this wiki entry. We will first discuss the health effects of air pollution in general. Then, we will outline three major sources of air pollution in Guangzhou: energy infrastructure, industry, and transportation. For each source of air pollution, we will discuss possible solutions to the problem, as well as difficulties in finding solutions. 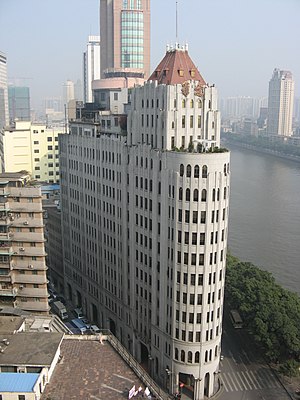 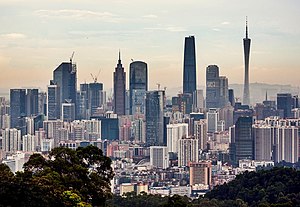 Within the past few decades, Guangzhou has rapidly grown into south China’s largest industrial powerhouse and international trading post (as it lies at the head of the Pearl River Delta)[1] (Kuo, 2017) . Rapid urbanization and industrialization has led to an enormous population flux, with millions of rural inhabitants migrating to urban areas in search of economic stability and prosperity. The city has grown from a population of 3.68 million in 1960 to 14.5 million in 2017[2] (Country Digest, 2017) . In addition, the city has a floating population of approximately 6 million which work in the city but live in rural areas, making it one of the most densely populated megacities in China with an average population density of 1800 people/km2.[3] (World Population Review, 2017) This rapid population flux has increased resource extraction, exploitation, consumption, and waste production and consequently, air pollution has become the biggest threat faced by the city of Guangzhou.14.5 million inhabitants plus the 6 million floating inhabitants work and live amidst extremely unsafe levels of air pollution where daily average concentrations of fine particulate matter (PM10) is 69 μg/m3[4] (Zhaung el al., 2011), which is well above the acceptable range of 0-50 μg/m3 as outlined by the World Health Organization. The scope of this issue is primarily at the local/regional scale; however, it can also influence patterns at a global scale. Indeed, this emerging trend has been seen in all emerging megacities in the developing world—i.e. Mumbai and Cairo. At the local scale, air pollution affects the short term and long-term health of individuals, as well as degrades the environment, causing thing smog/haze[5] (Zhaung el al., 2011). It’s a global phenomenon. Cite examples of other global south cities struggling with air pollution, beijing, etc. The largest contributors to air pollution in Guangzhou originate from industrial factories, energy infrastructure, and vehicular transportation. The city relies on industry and energy infrastructure in order to sustain its current economic status and future growth. The population relies on jobs and opportunities provided from these industries in order to feed and shelter themselves. Along with this, transportation development increases as people need to travel great distances to and from their work. The removal or reduction of such factories can have catastrophic effects on the economic and social welfare of the city. Inversely, the existence and growth of these factories along with vehicular transportation degrades the very air needed in order to survive and live healthy lives. Hence, the city is entangled in a complex cycle of economic prosperity and degradation of individual and environmental health. The Guangzhou Environmental Protection Bureau is struggling to tackle the increasing problem of industrial air pollution. A study of the Bureau found that conditions for stricter enforcement of regulations improved from 2000 to 2006, but then remained fairly stagnant after that. Lack of government support, and societal support were cited as problems. The scale of environmental issues has intensified so much that it exceeds any growth of enforcement capacity. Even greater support for the Protection Bureau will be needed to curb increasing industrial air pollution as Guangzhou develops.[6] (Lo, 2016)

The effects of poor air quality can be measured in terms of an increase in hospitalizations and preterm births, along with an increase in mortality rates across all populations (2). A study conducted by Zhaung, Z el al.[7] found that long term exposure to air pollution resulted in an increase in hospitalizations by reducing the functions of organs (i.e. lungs). An increased concentration of air pollutants (NO2, SO2 & PM10) also attribute to preterm/premature births. Although the mechanisms behind this are debatable, recent studies indicate, “that air pollution could activate the fetal hypothalamic- pituitary-adrenal axis (HPAA), which can stimulate uterine contractions and premature rupture of fetal membranes and consequently cause preterm birth” (1). Lastly, research conducted by Yang, et al., aimed to determine years of life lost [YLL] from cardiovascular mortality due to air pollution. This study confirms that there are significant and strong associations between YLL due to cardiovascular diseases and concentrations of air pollutants. The study states, “that short or long-term exposure to air pollution may lead to a systemic inflammatory response, increased blood pressure, increased heart rate or decreased heart rate variability, or increased blood viscosity or plasma fibrinogen changes […] and such impacts will bring about an increased YLL due to CVD” (Yang, J et al.). Studies done by both Yang et al. and Yu et al. imply that there might be gender specific vulnerabilities also associated with increased mortality rates. For example, both studies indicate that the three main air pollutants on mortality rates showed a stronger influence in women than in men; however, more research needs to be done to confirm such implications. A coal powered factory in Guangzhou [8] Having a huge demand for car travel, one of the highest densities of vehicle population, and one of the largest automobile manufacturing bases in the country, Guangzhou’s air pollution problem is caused in large by transportation. Although significant, the misrepresentation of data by the government leads to a distorted understanding of Guangzhou’s air quality by the urban population. China emits the most NOx of any Asian country, but instead, NO2, a less severe pollutant, is used as a “key monitoring parameter” for air pollution in Guangzhou[16] (Lee, 2016). The government’s muted concerns on the state of air quality, along with growing participation by urban workers in the automotive industry, puts environmental considerations behind economic and political ones. According to a report released by the Guangzhou EPB in 2015, vehicle exhaust had become the primary contributor to dangerous PM2.5 (particulate matter) in urban areas, overtaking the industrial sector [17] (Lee, 2016). Despite the risks of poor air quality to the urban population, there exists the predicament of relying on vehicles for both transportation and livelihood, especially given the city’s growing automobile sector. Attempts have been made to control vehicle emissions, but these have not made significant improvements to air quality. In 1998, the “Blue Sky Project” was enacted to lower SO2 emissions, while in 2009, environmental labeling systems were introduced to control high-emission vehicles in urban areas. At present, the number of vehicles in Guangzhou continues to increase without restriction. Automobile emissions are regulated by ineffectual “technical fixes”, aimed to reduce emissions per vehicle [18] (Lee, 2016). However, there is a general lack of enthusiasm by the government to monitor automobile emissions because economic incentives take precedence. Perhaps, rather than attempting to limit the types and numbers of vehicles on the streets (which gives only temporary results), a solution could be for the government to introduce higher quality gasoline and diesel to reduce dangerous emissions[19] (Gardiner, 2017).

A major source of air pollution in Guangzhou is from industry. Increased industrial air emissions are a direct result of economic growth, and therefore will only increase in significance as Guangzhou develops[20] (Duzgorenaydin, 2007). One product of industrial air pollution is PCB. PCBs can harm the immune, reproductive, and endocrine systems. In Guangzhou, the sources of PCBs are electronic manufacturing and recycling, the production of pigments and paints, and waste incineration plants. Massive amounts of electronic waste are imported every year from developed countries. The continued urbanization and industrialization of the area will bring increased risks, with increasing demand for paint production and waste incineration. Continued study of PCB emission and the effects on workers will be needed.[21] (Li et al., 2017) Other recent studies have looked at lead pollution. Significant lead poisoning can cause a coma or death, while even small amounts can decrease cognitive function and lead to hearing loss. Leaded petrol was banned in China in 2000, but industrial and metallurgical activities are still a major contributor. Levels of lead in Guangzhou are much higher than those of European cities, but consistent with those of major developing cities such as Delhi, revealing that lead pollution is a concern shared by many developing cities in Asia. It is recommended that a long-term and extensive urban dusts monitoring program be established[22] (Nurdan, 2007).

Although efforts have been made by the government to control air pollution levels in Guangzhou, catering towards the growing economy is a priority that makes environmental regulation a secondary concern. However, it is important to realize that as a rapidly growing city in the global south, maintaining a healthy economy is vital to keeping Guangzhou competitive with other booming urban centres. Therefore, it is understandable that regulations surrounding air pollution would be relaxed, especially since remeding the issue would mean that vital economic sectors and industries would experience negative impacts to productivity (i.e. the automotive industry, infrastructure, and factories). This could be applied to other urban contexts as well - addressing air pollution is a complex issue as it could mean limiting economic production, and with more people migrating to urban areas, resources use increases. This puts these cities in a dilemma: limiting access to resources (such as automobiles, coal, recycling and waste management) while populations and economies grow is counterintuitive. Therefore, in other urban centers, policies targeting air pollution could be as slow and ineffective as many have been in Guangzhou.

In addition to the aforementioned suggestions of what the city could adopt to limit air pollutants, perhaps the most significant lesson is the collective steps that can be taken to address air pollution. Rather than Guangzhou relying on local measures alone, policies enacted on a national, larger scale can be more accountable. For example, China launched a national carbon market in 2017, putting a price on carbon emissions. Guangzhou was part of the initial experimentations for the policy, and the policy is ambitious and optimistic - China now has the world’s largest carbon market[23] (Harvey, et al., 2017). Although still in its early stages, it is important to consider from this effort that collective action, rather than efforts made on a smaller, individualized scale, can be highly effective in solving issues like air pollution that affect the quality of life, wellbeing, and health of a society.