Urban sprawl can describe an increase in low-density housing that leads to an increase in businesses, an increase in housing in rural areas, or a community with a central hub [1]. This case study will focus on the unequal distribution of density within the city of Dhaka, Bangladesh[2], the 11th densest city in the world[3].

Dhaka is the capital city of Bangladesh and it is considered a megacity, housing a population of 16.98 million people[3]. Bangladesh is known for its garment industry, but it also relies on chemical production, tea, pharmaceuticals, paper and leather products[4]. Dhaka is a low-rise, high-density city that operates on a freehold land system[5] which allows buyers to have the right to choose the usage of the land[6]. Since Dhaka operates on a freehold land system, it becomes difficult to assign different uses and services to certain areas of the city[5]. Dhaka has a river running through the city with different areas that are more prone to flooding[7]. With the increase in population, agricultural land and land near the waterways have been reclaimed in order to provide more housing[7]. As more rural-urban migration occurs, the unplanned urban sprawl will only become a greater issue for the city’s inhabitants.

Dhaka is a bustling megacity with 15 million people living in a 325 sq. km area[8]. Urban sprawl has become a prominent part of life in Dhaka, due to its growing population and the fact that it is the largest city in Eastern South Asia. The urban sprawl process is the result of decreasing demand for land development in the city center and increasing development in the periphery. A report by Ewing et al. (2002) shows some indicators used to measure sprawl including (i) low-density residential developments; (ii) a rigid separation of homes, services and workplaces; (iii) network of roads marked by large blocks; and (iv) a lack of well-defined activity centers, like ‘downtowns’[9]. Urban sprawl is important because of its impact on urban quality, city's public health and because the “changes in lifestyle associated with sprawl contribute to increases in the demand for natural resources" (p.57​)[9]. 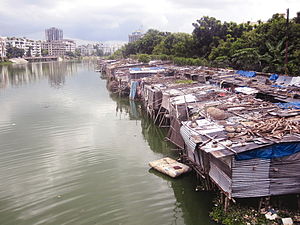 Considering how “in Dhaka, more than one-third of the population presently lives in congested urban slums, and this is expected to increase to 50% in the coming decades,” it is an important issue to analyze in terms of urban planning (p.1)[10]. Although scholars have no clear definition of urban slums, there is a consensus that slums are typically unhygienic, without formal sewage systems, have a population of as few as 1000 individuals to more than 1 million residents, and are short-lived[10]. The issue of slums affects Dhaka and its slum-dwellers livelihood and homeownership status. Most slum dwellers move due to slum eviction which influences their homeownership status from owners to renters.

Although urban sprawl is a major issue in Dhaka, it is very much a global phenomenon. It is a global issue since urban sprawl is a result of “both rural-urban migration and natural increase in population” in many developing countries (p.400)[7]. Urban sprawl happens in European cities too as the growth of European cities recently has occurred on former agricultural land[9]. This has resulted in a lot of European cities that have existing urban areas adjacent to agricultural lands experience urban sprawl, as this is the ideal condition for urban development. Considering that Dhaka suffers more from flooding due to its flat surface and rising sea levels, flooding is also problematic for European cities. Some of the European countries most vulnerable to coastal flooding include the Netherlands and Belgium[9]. Thus, this implies that since citizens in Dhaka and the Netherlands live in coastal regions highly vulnerable to sea-level rise and flooding, “the management of these risks and planning for adaptation will be made more complicated if sprawl is not controlled” (p.57)[9]. Thus, urban sprawl and its result of flooding is a global phenomenon, affecting cities in Europe as much as in Dhaka, and should be addressed.

In Dhaka, there are many environmental impacts arising from urban sprawl and slum expansion. Urbanization (urban sprawl) and unplanned urban growth results in flooding issues, damage to water resources and waste of land resources. Furthermore, the urban sprawl results in a lack of green policy for green spaces and an increase in air pollution and damage to plant and animal biodiversity. The scale of our research focuses on the theme of urban sprawl, and our scope includes the issues that result from urban sprawl including slums, urban planning, and its environmental impacts in Dhaka.

The Karail Slum in Dhaka

A major defining characteristic of Dhaka is its growing population due to rural-urban migration. This migration has been resulting in confused urban sprawl, also known as informal urban sprawl, that is not planned by the city corporation or private developers, by occupying lands on the edge of the urban area[11]. The migrants often live in self-built houses which are houses that are built by the residents by using their own leisure time[11]. Simultaneously, Dhaka’s slum population has been growing rapidly. Between 1996 and 2005, the number of slum dwellers shifted from 1.5 million to 3.4 million[12]. These new urban populations in Dhaka often seek shelters in slum areas or encroach on pieces of land right outside of the urban area[13].

One of the largest reasons why slums in Dhaka keep growing is the unaffordability of housing. Due to the unorganized distribution of land and high competition to acquire lands, Dhaka’s available residential land is unaffordable for lower and middle-class residents, while the upper-class own land in residential areas and the upper-middle class live in the urban fringes or congested areas[13]. Many slum dwellers move to other slum areas for more affordable housing options with better infrastructure[12]. In many cases, when slum dwellers in Dhaka are able to buy land, they can only afford small pieces of land on the edge or right outside of the city[11].

Another issue for slum dwellers is eviction. Besides financial reasons, the lack of government policy to protect lower-middle and lower class residents from eviction puts slum dwellers in instability[13]. Meanwhile, most parts of the major slum areas in Dhaka (Kallyampur Slum, Agargaon Slum, and Karwan Bazar Reilate Slum) belong to the government or semi-government organizations, except for a few cases of individual ownership[12]. A significant portion of urban land in Dhaka is also held by the government for army, police, defense agency, railway and government office uses[13]. In fact, planned residential areas for middle and upper-income residents (Dhanmondi, Banani, and Gulshan) are now transformed into commercial districts[13]. Commercial districts were not particularly assigned areas in the initial planning of the city and industrial areas encroached residential areas due to a lack of strict laws on the exclusion of industrial land[13].

Developers have recently addressed larger sections of land in order to build well-designed road networks in Dhaka and shift from informal sprawl into formal sprawl[11]. However, economic outcome, over time, has become the strongest determinant of social classes among Dhaka residents rather than professional and educational background[11], and the fact that Dhaka lacks restrictions on industrial land uses might have led it to even greater dependency on the economic perspective of urbanization. This neoliberal focus on urban planning can potentially lead those vulnerable residents in Dhaka to be evicted even from slum areas, in order for investors and governments to build more industrial and commercial districts.

Monumental damage to the environment’s land, air, and water systems is a result of the massive urban sprawl and slum expansion in Dhaka. The urban growth is located in the central region of the deltaic plain alongside three rivers; these three international rivers are Ganges, Brahmaputra, and Megha. The rapid growth of slum settlers has resulted in an increased amount of untreated and uncontrolled disposal of waste which is directly dumped in these rivers and wetlands. Dhaka is producing 0.47kg of waste/capita/day which is 227,153 tons/year of waste[14]. Not only does this increase contamination in other countries as well as the health of their citizens, these three international rivers increase surface and groundwater contamination due to the eutrophication of the waste. The eutrophication and loss of oxygen regeneration due to increased microorganisms cause a reduction of biodiversity and death of animals and plant life. The increased expansion of the city of Dhaka also poses a risk to the amount and quality of water reserves. The large sediments produced by construction materials are also dumped near wetlands and rivers and are transported to other cities during Dhaka’s monsoon season[15]. The large waste materials then cause clogging of natural wetlands, reducing the intake and storage of these water reserves, damaging the watershed and increasing the risk of flooding. Dhaka is at extreme risk of flooding also because of its flat surface. As climate changes and sea levels rise, Dhaka is faced with a serious threat of flooding.

Since the independence of Bangladesh in 1971, 80% of the land in Dhaka was non-urban, by 2005 about 40% of Dhaka’s land was considered non-urban[16]. This has made the land a very valuable commodity in Dhaka with more than 70% of the city’s population having no access to land[17], as a result of lack of space and the unattainably high price of land. Currently, urbanization in Dhaka has taken place in the depression and abandoned channels that occupy 1185 hectares of land which are unsuitable for urban expansion[14]. The problem with this kind of urban growth is there are no set rules or policies implemented to address the conservation of green space, leaving only an 8% tree coverage in Dhaka[17] when the ideal is 20%. Dhaka is experiencing massive deforestation and loss of biodiversity as a result. The land has traditionally been used for landfilling sites to mitigate land pressure[17]. These landfill sites are often filled with a variety of waste (i.e. toxic waste, solid waste, and domestic waste) that are not separated and affect the soil quality and stability of the land.

Air quality in Dhaka has been extremely compromised through the city’s urban sprawl. The rapid growth of slum settlers and their informal housing has resulted in them using traditional forms of fuel such as wood, cow dung or waste paper for cooking which increases greenhouse gases[17]. Fires are also extremely common and pose a great risk to the land and air because of the informal use of fuel in slum areas.

The construction of Dhaka’s urban center has also caused an immense level of noise and air pollution.

In the context of slum living areas, scholars suggest that microfinancing for the lower and lower-middle class residents give them stronger purchasing power in housing[13]. Although there have been successful cases of microfinancing in Bangladesh, it often leads to dependency on financial institutions, thus reinforcing the upper-class citizens’ economic power. Microfinancing promotes the neoliberal policy of Bangladesh through supporting financial institutions that impose unreasonable interests on lower and lower-middle class clients. A possible solution to the slum crisis is regulating commercial and/or industrial districts in Dhaka to secure areas for lower and lower-middle class citizens to reside in. The poor prospect of passing regulations like this under the liberal regime of Bangladesh is one of the critiques to this issue.

While the economic sector is crucial to the prosperity of cities, it is vital to acquire better economic and social opportunities as an incentive of rural-urban migration, urban centers are not facilitated to take in a large number of lower and lower-middle class migrants. Thus, although it is important for cities to attract foreign investment, facilitating local infrastructures, such as regulations to protect housing options for lower and lower-middle class citizens and conserving the natural environment, is a crucial aspect of urban development for urbanists' well-being.