A street under renovation in Phnom Penh, Cambodia

Rapid urbanization has played a key role in shaping the urban landscapes in the Global South. The massive growth of urban centres, compounded with an ever-increasing urban population and rural-urban migration, puts immense pressure on cities in the Global South to meet the housing needs of the urban population, especially the urban poor and new migrants. One of the major outcomes of the urbanization process is the emergence of informal settlements in urban centres. These urban informal settlements are often characterised by “a lack of basic services, inadequate building structures, overcrowding, unhealthy and hazardous environmental conditions, insecure land and housing tenure, poverty and exclusion at many levels” (Suhartini and Jones, 2019). They do not exist in compliance with formal arrangements of urban planning and are often unrecognized by local governments, leaving informal settlers vulnerable to tenure insecurity and forced displacement. Across cities in the Global South, policy approaches to these informal settlements have been diverse on the local, national and international level.

The process of urbanization in the Global South has contributed to the rise of informal settlements in urban centres. In a broader sense, informal settlements refer to unplanned settlements that are unauthorized by the state (Jones, 2017). It is often used interchangeably with terms such as slums, “urban villages”, squatter and unplanned settlements, despite nuances in meaning depending on the historical, political, economic and social circumstances of the urban contexts (Jones, 2017). In particular, slums are classified as “the most deprived form” of informal settlements and have been defined by the United Nations as “residential household[s] characterized by an absence of basic services including adequate drinking water and sanitation, lack of security of tenure, inadequate and overcrowded living areas, and structurally unsafe housing” (Jones, 2017).

While these informal settlements are largely concentrated in the Global South, the scale of their growth is indicative of a global phenomenon. In fact, it was estimated in 2015 that 25% of the world’s urban population continued to live in slums and almost every 1 out of 3 people in developing cities live in slums within an informal settlement (Jones, 2017).

The presence of these urban informal settlements is often in conflict with the interests and plans of cities to modernise and develop in order to meet the pace of rapid urbanization and economic development. This can sometimes result in violent clashes and violations of basic human rights of urban dwellers. For many of the urban poor living in informal settlements, issues of land rights, tenure insecurity and human rights violations in processes of forced evictions remain to be an ongoing struggle, as is the case in cities in the Global South, including Phnom Penh.

Phnom Penh is a growing city in the global south, it has had a lot of efforts to mediate informal urban settlements however most have failed. Economic development and urban planning is needed in a rapidly developing city such as Phnom Penh in order to increase a standard of living. Informal settlements and urban planning is very important as it houses lots of the cities' population. There are many reasons for substandard informal housing, lots of it is the result of competition for land (Clerk, 2016) . People are vulnerable as land prices are going up and investors are given preference for development. The rich here have the power as the poor are left behind trying to make ends meet.

Phnom Penh’s context of land ownership is also deeply intertwined with the complex history of Cambodia. Under the Khmer Rouge regime (1975-1979), private ownership was abolished and the city of Phnom Penh was emptied of most of its inhabitants. Under Vietnamese occupation (1979-1989), the socialist state allowed gradual resettlement in the city, in empty houses, land, or infrastructure, but all the land remained under the possession of the state. At the end of the Cambodian-Vietnamese war in 1989, the Cambodian state started a general redistribution of land ownership, but tenure insecurity remained high with the concentration of ownership in a small number of individuals, and a lot of inhabitants remained in an informal or temporary situation. (Clerc, 2016)

Prior to 2010, Boeung Kak was a lake centrally-located in Phnom Penh (“Boeung” means lake in Khmer) in close proximity to the train station and the colonial centre. Its banks are prone to flooding but have been one of Phnom Penh’s largest site of informal settlements, with vibrant economic activity. In the mid-2000s, more than 4,000 families lived on the river or on its banks (Clerc, 2016). When the Boeung Kak land was leased to a private real estate developer, informal settlers were forcibly removed from their homes, as the struggle to receive adequate compensation proved to be difficult without land titles. Since 2015, the lake has been fully covered and development projects have been carried through.

This case study reveals the involvement of international organisations, government bodies, private investors, as well as community-led initiative, in shaping Phnom Penh’s urban development and determining the place given to informal housing and the urban poor. 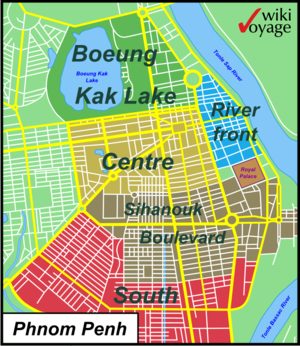 Boeung Kak lake, which existed prior to 2010, was located in Phnom Penh's city centre, making it prime real estate for development as the city grows.

Since the end of the Khmer Rouge regime, successive land titling initiatives discussed previously have left many complex ownership issues unresolved, and unclaimed land remained under the ownership of the state. In parallel, patterns of squatting are increasing in the Cambodian capital especially in public spaces, roadsides and riverbanks. (Clerc, 2010) Beyond the human rights’ concerns, land titling on a large scale is crucial to having a dynamic real estate market, increasing residents’ de jure and perceived tenure security, and incentivising property investments (Flower, 2019).

In 2002, a country-wide land titling project was launched by the Ministry of Land Management, Urban Planning and Construction (MLMUPC), with the support of the World Bank. The Land Management and Administration Project (LMAP) aimed to guide land registration in Cambodia over fifteen years, with special attention to poor communities living in informal settlements. Overall, academia has suggested that this project has failed to increase tenure security and investment for the most vulnerable urban dwellers, by granting land titles to residents with substantial pre-titling tenure security and housing investment, but leaving those with high tenure insecurity and low levels of investment

excluded. (Flower, 2019) Claims of corruption has also led the World Bank to periodically suspend credit towards the project. (Clerc, 2016)

In 2006, the LMAP project initiated land registration in the district of Sras Chok, where Boeung Kak is located, but inhabitants of the Boeung Kak area were denied investigation of social concession requests, on the grounds that they lived on public property or a “development zone”. At the time, plans of the development project to take place in Boeung Kak were not yet made public. (Clerc, 2016)

In January of 2007, the Municipality announced to the public it has granted a 99-year lease to private developer Shukaku Inc to dry the lake and develop the area. Shukaku Inc. is a development company with strong links to the ruling party: its owner, a Senator advisor to the Prime Minister and his wife, director of Pheapimex group, largely fund the Cambodian People’s Party. (Paling, 2012)

In the summer of 2008, the area was demarcated and transferred to the private domain, and the lease providing that the decision of what to do with informal inhabitants of the land should be taken by the private firm. In August 2009, the first residents were evicted, and given three options: a 8,500USD compensation, a flat on the development and 500USD compensation, or resettlement to unequipped land 20 kilometers outside Phnom Penh. This led to extensive community mobilisation, international advocacy and violent clashes with government forces, but ultimately most of the 20,000 inhabitants were evicted between 2009 and 2011. (Clerc, 2016) Kenyan activist Maina Kiai (right) and women of the Boeung Kak community (left) holding a poster of Tep Vanny, a land rights activist who was imprisoned for her protests again Boeung Kak evictions.

In February 2011, the community came together and proposed an alternative plan for resettlement and upgrades. Their plan would only change 12% of the area and would allow for many of the families to stay. The community reached out to the relevant government and sent a letter to the Chinese investor group asking for their support, but the government rejected this proposal and the community never got a response from the Chinese investors. (Inclusive Development International, 2012) Community mobilisation against the expropriation was violently punished, with homes being demolished without prior warning (Gorvett, 2011), violent clashes with armed forces and imprisonment of Boeung Kak Lake residents and activists, such as Tep Vanny, a housewife who led the female activist group Boeung Kak 13. This caught the attention of organisations such as Amnesty International, but despite their call to cease excessive violence against peaceful protests, the forceful evictions and development proceeded. (Amnesty International Publications, 2012)

Image taken on 26th of August 2010 of Boeung Kak lake being filled with sand.

Complaints to the government or international foundations are often the only way that residents managed to stay on their land and avoid eviction (Flower, 2018) but the connections between politics and developers limits the impact that community action has. (Beard, 2018)

As of April 2014, 3500 of the 4000 families in the area had accepted compensation for only a fraction of their homes value. (Inclusive Development International, 2012) Many families are still excluded from receiving land titles and are being forced in one way or another to move off their land. In 2014, the US Congress passed laws to redress the problems within the community. (Inclusive Development International - US Congress, 2012) These laws were to put pressure on the World Bank to revisit the problem within the area. During August 2015, the community wrote another letter to the World Bank pleading that they uphold the rights outlined earlier to help support the families in the area. (Inclusive Development International, 2012) As of 2017 the entire lake had been filled in with sand which caused massive economic impact for families that still live there, with one man collecting garbage and selling it as his only form of income because his farm had become unusable as a result of the Lake being filled. (Baliga & Chakrya, 2017) The Chinese investor group pulled out in 2014 and are no longer a part of the development project (Baliga & Chakrya, 2017) but this was not enough to stop development in the area and construction of the high-end real estate project began in October of 2015. (Baliga & Chakrya, 2017)

In rapidly developing Global South contexts, informal settlements remain to be a significant challenge for urban development in cities of the Global South. Economic development and modernity often clash with the welfare of urban poor, as evident in housing and urban planning policies. The approaches of community-led initiatives, private investors, governments and international bodies have had their limitations in addressing informal housing and improving livelihood of urban poor.

The evictions surrounding Boeung Kak lake show a prime example of a megaproject promising economic development coming to a clash with the livelihood of particularly vulnerable urban dwellers in a situation of informality. The lack of formal land titling made it particularly difficult for displaced populations to receive adequate compensation, as community-led efforts were heavily sanctioned and failed to stop the development project. Close ties between megaproject shareholders and high ranking government officials often lead to antagonistic government responses, which favors short-sighted profit-making over sustainable and equitable urban planning. The Boeung Kak lake case study also shows the involvement of international non-governmental organisations from the Global North in settling local disputes over land in the Global South. This raises two questions: the issue of aid dependence when it comes to the World Bank and the land titling initiative, and the question of efficiency in safeguarding the residents’ basic human rights, when it comes to the involvement of Human Rights Watch and Amnesty International. Overall, a quick glance at the complex land titling context in Phnom Penh reveals the need for more inclusive and contrasted urban theories which can account for specificities of urban south contexts, such as colonial past and relics of civil wars.