Course:GEOG352/2020/Effects of Migration in Manila, Philippines

Migration is rampant now more than ever due to the growth of globalization and developments in transportation. From 2000 to 2017 the total number of international migrant workers rose from 173 million to 258 million.[1] Out-migration in the global south has significantly transformed the urban dynamics of cities. Out-migration has shifted the conversation of who has access and the right to urban capital due to the rapid movement of people. The social, political, and economic spheres of a city are all affected by migration. It is important to recognize that out-migration affects not only the host country of migrants, but even more so the city which migrants leave behind. Out-migration creates linkages between two or more locations, with consequences that are absorbed differently in each city. Manila, the capital of the Philippines, has experienced significant levels of out-migration over the last decades. Manila’s most productive industries include: tourism, agriculture, and manufacturing.[2] An estimated one million Filipinos leave the country each year to work abroad.[3] Currently, there are 2.3 million Filipinos with formal contracts to work abroad.[4] The city of Manila finds its labourers migrating into cities like, Doha, Riyadh, Vancouver, and Kuwait City. As Manila’s workers migrate out, the city increases its dependency on remittances — income earned by migrant workers that is sent back to the host state. Furthermore, the urban landscape and its expansion is heavily affected and dependent on remittances and migration flows. Out-migration heavily influences the culture of urban life in Manila; Generating impacts like the increase of rural to urban migration, and a shift in narrative with who has a voice in shaping the urban.

Out-migration is the process by which citizens of a certain state opt to migrate to another city or state in search of better opportunity or higher standards of living. In the global south, particularly within developing Asian countries, workers flock to more developed cities in search of employment opportunities. Labour migrants typically work in the more labor-intensive, low-skill level industries, and occupy the low-income to middle-class bracket of society. Factors that induce the growth of out-migration in the global south range from: stagnant economic development, mass unemployment, to political turmoil.[5] Out-migration induces a chain of impacts on urban life that range from shifts in the urban economy to the impacts of various stakeholders in the urban landscape. The overarching issue with migration lies in its impact on the migrants’ city; Out-migration affects flows of capital and generates dramatic changes in the shaping of suburban expansion. With the constant growth of out-migration throughout the global south, Manila emerges as a key city to study the impacts of out-migration on the urban setting.

Manila is a prime example for analyzing the impact of out-migration considering how the state commodifies its people by perpetuating the culture of out-migration — Filipinos that migrate outside of Manila are referred to as Overseas Filipino Workers (OFWs). As of 2009, over 5 million Filipino workers were employed in over 190 countries,[6] this demonstrates the vast scale the out-migration issue operates in. Furthermore, the issue of out-migration is a significant case due to the fact that remittances from out-migration account for ten percent of the Philippines’ overall GDP.[7] 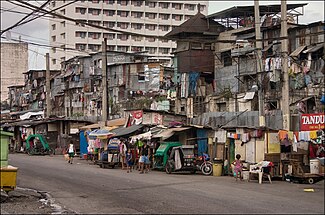 Consequences of Out-Migration on Urban Life

There are a number of consequences arising from out-migration from the city of Manila. These consequences include: economic changes, demographic shifts and social implications. In terms of the smaller scale consequences within Manila, economic repercussions are observed through remittances — a significant source of Manila’s overall capital. The social impacts, such as demographic shifts, which are observable through suburban expansion. It is vital to pay attention to out-migration in Manila as it continues to create tensions within the urban centre. The process of out-migration exacerbates the unequal relationship between lower and higher-income residents in Manila. Furthermore, the issue of out-migration shapes the push and pull factors that drive residents to stay and participate within the city, or to leave in search of opportunity elsewhere.

Out-migration is a global phenomenon. Increasing globalisation has been accompanied by large-scale movements of migrant workers from one city to the next in search of opportunities. The scale of the issue of out-migration is particularly apparent in the case of Manila, due to the city’s prominent role as a producer of agricultural goods within global commodity chains, and supplier of workers.[8] Cities such as Dhaka and Mumbai have faced similar consequences of out-migration, illustrating that out-migration and its consequences are not just a localized issue confined to the Philippines.

Impacts of Remittances on Urbanization

The increasing globalisation of the Philippine economy, driven by an outflow of migrant workers and inflow of remittance monies, has restructured capital accumulation and investment patterns in the country. This has affected urban centres like Manila more than rural areas, as remittance flows are unevenly concentrated towards cities. Richer regions such as the National Capital Region (NCR) in which Manila is situated receive more remittances and deploy more overseas foreign workers (OFWs) than poorer regions.[8] It follows that remittances are primarily an urban income source, which exacerbates existing urban-rural and regional inequalities in the Philippines.[9][10]

In the context of urbanization, one important impact of remittances is the growth of the real-estate sector as an area of investment for remittance-receiving families. Kenneth Cardenas estimates that “30% of all remittances sent home by OFWs are spent on the real estate sector."[8] Advincula-Lopez argues that this is partly rooted in social norms and behaviors: investments in housing and housing improvements are an indication of social mobility for Filipinos.[11] The Filipino agricultural industry was hampered by structural adjustment programs imposed by foreign aid providers in the 1980s and is further suffering in the face of competition from abroad. When combined with the economic stimulus offered to households by remittances, this trend has led to the fact that traditionally landowning classes are diversifying out of agriculture and investing in real-estate, primarily in urban centres like Manila.[8] Commercial and office real estate are growing areas of investment, combined with residential developments catering to Manila’s growing class of wealthy professionals, leading to inflated land prices in the central business districts.[12] This issue has a political dimension as well: Filipino land-based elites who wield significant political power are able to influence zoning laws in Manila’s rapidly urbanizing periphery in favor of value-added redevelopment.[8][12] 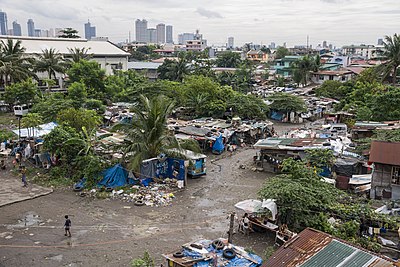 The boom in the Manila real estate sector is causing a rise in property values as remittance-supported households are able to meet increasing land prices, but is simultaneously contributing to high levels of housing deprivation for the city’s low-income residents.[8] Manila’s inhabitants are experiencing a polarisation of incomes, and low-wage service sector workers are being displaced by urban redevelopment and gentrification.[12] Remittances are thus contributing to social polarisation in Manila as the city’s core is taken over by privatised, high-value developments and households that are unable to tap into global capital flows are pushed out to the city’s periphery or forced to relocate out of the greater Manila area entirely.[8] This disproportionately affects urban dwellers living in informal settlements, approximately 20 to 35 percent of residents in Metro Manila,[13] who are largely ‘forgotten’ by city planners in their efforts to establish Manila as a global city.[12] Lack of access to centrally located urban space has resulted in increasing distances between employment and residence for low-income workers, with long commutes and traffic congestion contributing to high levels of air pollution.[12]

The global circuitry of migration, through which a significant flow of remittances is sent back to the Philippines by Overseas Foreign Workers, is defining the nature of urbanization in Manila. Remittances are fuelling real estate developments and rising land values in the urban core, which has important consequences on urban issues such as housing deprivation.

Manila has experienced substantial expansion to its suburban areas over recent decades, accompanied by falling urban population densities. Transnational suburbs refer to the suburbs whose emergence and growth rely primarily on transnational mobilities, remittances, and diasporic capital.[14] Out-migration is a major contributor to the prevalence of suburban expansion in Manila. Overseas Filipino workers purchase homes in gated suburban areas and provide remittances to their family back in Manila to maintain and watch over these new places, engaging in transnational transactions with property developers in Manila. The Central City’s population growth has slowed due to migration since 1950 relative to the nearby provinces of Rizal, Cavite and Laguna, which have been steadily reporting higher net migration rates.[15][16] The whole metropolitan region reported a negative net migration rate while still receiving a substantial number of migrants from other parts of the Philippines (18.9% of the national total).[17][18] These trends suggest that the outflow of Overseas Foreign Workers from central Manila is creating vacancies in the urban labor market and encouraging internal migration from rural provinces to the National Capital Region. Many of these internal migrants are settling in the urban periphery of Manila, causing rapid urbanization in suburban barangays (neighborhoods).[17]

Efforts to situate Manila as a competitive metropolis within a constellation of global cities is thus shaping the kind of urbanisation witnessed in Metro Manila and surrounding provinces.[12][6] The most significant population growth has occurred in outlying and formerly agricultural barangays. These high-growth barangays are sites of land use conversions and real estate developments that strategically developed along areas with access to major road networks to Metro Manila.[19] In the case of Cavite and Laguna, the establishment of industrial estates became a magnet for migrant workers and residential development projects. Over time, new retail and commercial hubs, schools and recreational facilities have been constructed to cater to the growing suburban population. More recently, several private township projects have been built by single real estate developers in several formerly agricultural barangays, creating residential communities complete with business parks, commercial, retail and luxury amenities.[19]

When combined with growing real estate investment that makes the urban core unaffordable for many citizens, facilitated by remittances, out-migration in the Philippines is contributing to the expansion of suburban barangays in the urban periphery of Manila.

The culture of out-migration in the Philippines has had major influences on key geographical themes, particularly in areas of development and urbanization in relation to space. With substantial emphasis on income from overseas foreign workers (OFW’s), spatialization of the city is largely class-based, reinforcing existing social hierarchies in the Philippines. Due to this trend in migration, wealthier classes benefit at higher rates from remittances; they have access to greater investment opportunities, and consequently have jurisdiction over formatting and control of the urban spaces.

Peripheral regions have increasingly been integrated into the city core as the Filipino government attempts to incorporate the economies of major urban centres such as Manila into globalised systems of capital.[8] Migration, being an indicator of a globalised economy, affects the urban growth by creating expansion opportunities through investment of remittances, evidenced in the “built up area” around Manila developing at a rate of nearly 3% annually from 1990 to 2000.[8] The consequences of having large outflows of peoples in Manila that create these ‘extended metropolitan areas’ and suburban expansion results in a difficulty of upward mobility that can cement disproportionate opportunities through informality of social and legal abilities.[12] The urge to create a globalised world economy through the outflow of peoples and goods particularly affects costs of legal institutions (such as the housing or real estate markets), meaning heightened implications on the informal sectors.[12]

Out-migration in aiding disparities between class leverage, the informal and formal sector and changing ideas of the periphery are not some that are entirely distinct to Manila. For example, Hong Kong is experiencing high rates of migration particularly of skilled workers to mainland China, and Chiu states that this displacement internally is “beyond intra-urban migration”.[20] One possible adoption that this context could take from Manila could be implementing legal housing frameworks for lower income areas to stabilize spatialization in the urban context as migrants leave and household revenues expand.