Urbanization is happening at a rapid pace in many cities throughout the global south. This rapid urbanization has many consequences for the development of cities and the housing situations of their residents. One of the most prominent consequences of rapid urbanization is the process of gentrification. As cities grow, so do the opportunities to profit from land and real estate investment. Speculators, both domestic and foreign, can generate significant profits during these boom periods, which results in rising prices in the real estate market. Foreign direct investment (FDI) can inflate housing markets above levels that would naturally occur in the local economy.

Furthermore, as is the case in Addis Ababa, much of the real estate investment in the global south occurs in luxury housing because it is more profitable,[1] which gentrifies areas of cities and makes them financially inaccessible to large portions of their population. Since the vast majority of populations in global south cities do not have the financial resources to enter these markets they end up living in primarily informal housing that often deprives them of access to important public services and limits their economic opportunities. Poorer residents that are displaced by gentrification and government expropriation of land, as in Addis Ababa, face difficulties such as loss of income and informal social networks as well as decreased access to health services and schools.[2]

In Addis Ababa, the capital of Ethiopia, urban growth has increased dramatically since the 1970s and continues to grow at around 4.6% annually.[3] Most of the city’s residents (over 80%)[4] live in slums. The government has expropriated 400 hectares of land between 2009 and 2015[5] and those displaced were poorly compensated. During this period, a huge increase of FDI occurred in particular from China. Due to these factors, Addis Ababa is an example of a city undergoing rapid growth and experiencing resultant gentrification.

Gentrification is the process in which poor and at risk residents of an area are either forced or pressured to relocate in order to accommodate for an influx of a more affluent population. Ruth Glass, a British sociologist, first identified the process of gentrification in 1964 “as a complex urban process that included the rehabilitation of old housing stock, tenurial transformation from renting to owning, property price increases, and the displacement of working-class residents by the incoming middle classes.”[6] Later scholars, Atkinson and Bridge expanded on Glass’ definition to “colonization by the more privileged classes”[7] in order to reflect its global relevance in urbanization. Many scholars[2][8][7][9] since have studied the impacts of gentrification in the global south and have formulated several theories.

Most theories regarding gentrification of land and housing can be sourced from Karl Polanyi’s theory of fictitious commodity from 1944. Polanyi suggests that society has a desire to impose financial value to items (land, labour, money) that are not created to fit the market structure[9]. The commodification of these fictitious commodities has changed their meaning to society and subsequently their interactions with society[9]. David Harvey, a British geographer, correlates the concept of fictitious commodity with the process of gentrification by first commenting on society’s “increasing tendency to treat the land as pure financial asset”[10]. He further expresses the embeddedness of defining land as an asset causes the society to prioritize economic benefits, especially when global trends are heavily market driven.[10]

Facilitated by Harvey’s observation on fictitious commodity in society, Atkinson and Bridge identified the phenomenon of gentrification as a tendency towards “questions not just about ... interrelations with globalization but also its manifestation as a form of new urban colonialism.”[7] Atkinson and Bridge suggest that gentrification is in fact influenced by other state actors due to globalization and is tied to the societal emphasis on generating economic gain.

Building off of Atkinson and Bridge, Gebre Yntiso suggests one of the main causes of gentrification in the global south is due to investment, often from foreign sources. Yntiso states that “in order to restore the economic and financial vitality of cities, city officials must attract investment by companies and individuals, who as a rule operate under competitive and profitable conditions.”[2] Yntiso establishes that economic motivations often drive governments to prioritize investment projects over the well being of informal housing residents. In particular, Seyoum and Lin state that “the Government of Ethiopia, being fully aware of the importance of FDI contribution to sustainable economic and industrial development, has implemented various reforms and incentives to attract FDI[8].” With the residents of these informal settlements frequently not considered within these investment decisions, or in the locus of power they are often overlooked. As a result, gentrification occurs when policymakers encourage outside investment towards real estate.

Gentrification’s negative effects reach beyond access to adequate housing. When displaced by gentrification, people are often pushed to the outskirts of the city and often experience a loss of income[2][11] due to increased distance to work and the lack of public infrastructure and services such as transportation and education. This in turn also reduces their ability to purchase necessities such as food and healthcare.

Gentrification is not only an economic force, but is also a “fundamentally political conflict”[12]. When social networks are disrupted by their displacement, as they have been in Addis Ababa,[2] people’s ability to organize politically is negatively affected. Gentrification can also be a polarizing issue, as demonstrated by the political grievances of the Oromo people and their retaliation within Addis Ababa core city itself.

Gentrification and Displacement in Addis Ababa

Gentrification in Addis Ababa is a growing concern for its local population. Since the shift in government in 1992, Addis Ababa has seen significant changes in their land use distribution. From 1984 to 2014, urban land use increased by 325%, while agriculture and forest decreased by 54 and 75% respectively[13]. Economic factors are the largest drivers in the shift in land use, with policy and institutional factors following. Following the change in government in 1992, Addis Ababa created a more free market economy in major economic areas including, importantly, the real estate market[13]. While this has resulted in significant capital influx for Addis Ababa, it has also resulted in soaring real estate prices due to lease speculation. The high profit opportunities associated with real estate in Addis have attracted foreign investment, resulting in a market where the locals are no longer able to be competitive. One example of this is a figure from Melaka (2016), where the highest lease winning bid per 1

respectively. This bid is an astonishing 148.58x higher than the maximum assessed value of the given lease. The potential (and likely) negative consequences associated with an imbalanced market like this are far reaching.
This large shift in the economic reality of Addis Ababa can be attributed to an increase in foreign direct investment (FDI), which in the twenty years between 1992 and 2012 has reached 15.8%, with 86% of that coming from Chinese investors[13]. This increase in foreign investment has created issues with government-led housing initiatives such as the condominium project launched in 2004 designed to increase vertical growth and facilitate lower-income housing. Due to the increase in urban population, 61.1% of all housing in Addis Ababa from 2003 to 2010 was in the form of condominiums, intended to increase land-use efficiency. However, due to the market bubble, the housing has proven to be unaffordable for the low-income demographics it was intended for. Further still, very few are built in renewal areas which make it difficult for residents (if they are local) to afford the resettlement costs associated with relocating to these units.

Neighbourhood in Addis
Nevertheless, Addis continues to have a large influx of migrants due to it being a capital city as a result of the perception there will be more opportunity for migrants in an urban environment[13]. With limited ability to enter into condominiums or other formalized forms of housing, migrants usually rent houses in groups in low-income areas, where they engage in informal jobs and informally settle on inaccessible areas in Addis Ababa or in surrounding towns where there is an informal land market[13]. However, since 2008 there has been an urban renewal process initiative underway by the Ethiopian government, aiming to remove "the dilapidated urban settlement and ensure efficient urban land use of the inner city.[13]" As a result, those that are living informally in Addis Ababa are being pushed out in order for new higher capital projects to be put in place on this desirable inner city land. This creates a dynamic of those in lower-income demographics no longer being able to reside within the inner city, due to the two-fold combination of foreign direct investment and government-led land reclamation initiatives.

Displacement of the Oromo People

A prominent case of displacement in Addis has occurred among the Oromo people, a large ethnic group residing in the Oromia region surrounding Addis Ababa. The Oromo are a historically marginalized group and have been fighting for their “right to national self-determination”[14] for several decades. “In the name of economic development, hundreds of thousands of Oromo families have been forcefully displaced from their ancestral lands with no, or very little, compensation. These unconstitutional displacements did not only make the families poor and destitute but negatively impacted their culture, language, identity, and general well being.”[15] In 2016, protests broke out following government announcement of the Addis Ababa Master Plan,[16] which would broaden the borders of the rapidly expanding city into the surrounding Oromia region, displacing potentially millions of Oromo people from their ancestral farmland. What began as unrest over land rights launched into protests regarding larger political, economic, and cultural rights, and even cancellation of the development plans could not contain the widespread revolt. Highlighting a main source of their indignation, protestors targeted foreign companies, negatively impacting Ethiopia’s image for foreign investment[17]. A state of emergency was declared in October 2016. Hundreds were killed and thousands arrested in this first year of protest alone.[18] The conflict ignited widespread violence, and since the 2016 protests, around one million people have been displaced in the region.[19] Tens of thousands are living in camps, whose abrupt expansion has made infrastructure like proper water and sanitation impossible. 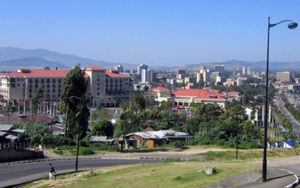 Displacement due to the Sheraton hotel

A further example in central Addis is the building of a luxury Sheraton hotel in 1994 which displaced 718 households and the hotel's subsequent expansion in 2010 which displaced a further 2,919.[11] This disrupted longstanding social ties and informal economies in the historical neighbourhood, where many had lived for generations. While Sheraton project planners and government officials promised resettlement housing projects, residents complained that a steady income was required, which for many in the informal economy is difficult or impossible. Etenesh Melesse's research demonstrates how the displacement particularly affected the women of the area who were often self-employed in home based income generating activities or other informal work. After being relocated to the outskirts of the city, they were now completely cut off from these informal markets, or were forced to travel long distances to work, buy and sell goods, and access social services.[11]