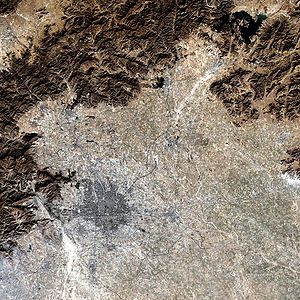 Many countries around the world are striving to improve their economies. In the geographical south and east, many of these countries have taken to boost their economic growth through industrialization and resource extraction. While some nations’ economies have seen some growth, this type of economic development has been done at the expense of the environment. With climate change worsening each year, having a balance of economic prosperity and environmental well-being appears to be a less reachable goal as time passes by.

China, for example, has witnessed its economy grow significantly in the latter half of the 20th century through industrialization and opening itself to the world. Today, the country boasts one of the highest GDPs in the world. China urbanized rapidly as a result, leading to growth in the Chinese middle class.[1] At the same time, the country constantly faces problems when it comes to balancing economic and environmental priorities as a result of its rapid economic expansion. To achieve this balance, China has decided to implement ecological civilization, which is largely about balancing the environment and development priorities.

Beijing is known to have a thriving economy. At the same time, the city constantly struggles to deal with environmental hazards such as air pollution and water scarcity. It was the first of several cities in China to implement these changes that follow ecological civilization.

Even though pollution continues to be an issue, Beijing continues to improve its situation by implementing policies that develop clean sources of energy and by enacting air pollution abatement policies. The city also focuses on being resource efficient, placing a higher emphasis on reducing the rate of waste and pollution instead of maximizing profits. To balance economic losses, the city develops high-end, ecological service industries.

Similar to the concept of Sustainable Development, Ecological Civilization is a vision about managing the relationship between humans and nature in a comprehensive, scientific and systematic manner[2]. It is an ideology about living 'harmoniously' with nature. This is done not just by co-existing with nature, but also by focusing and changing production patterns, economic foundations, and governance systems to be based on ecological rationality and efficiency of material output as opposed to output maximization[3].

To solve environmental problems, one needs to realize that there is a problem. Ecological civilization is the Chinese government’s formal way of acknowledging the severity of pollution. This formal acknowledgement is what leads China to start collecting, analyzing and publishing data in hopes of improving environmental conditions such as air pollution. Every city is required to put air pollution data online. While ecological civilization is a national ideal, each city has its own plans to improve environmental conditions[2].

Even though the ideological concept of ecological civilization does not explain the specific steps needed to achieve certain goals, they help determine how a city identifies with itself, which influences how policies are implemented.

China industrialized to improve its economic well being, but this came with massive costs. Environmental degradation brought with it many public health issues such as in child health development and respiratory disease, which can be harmful since they may last for a long time[2].

China has the world’s largest global carbon footprint. It is important to study how China deals with its environmental problems since its pollution, particularly air pollution, can have global effects, even being able to reach North America. China also has the most coal-fired power plants in the world, about 40% of the global total. To decrease emissions, in 2014, China shut down some coal mines and set limits on coal consumption[4].

Trends of ecological civilization in China

As part of its 13th Five-year plan, China has invested 10 trillion RMB in environmental protection in an effort to reform its environmental policies[5]. Air quality has improved, as air pollution decreased by about 30% in 2015, which led to an increase in life expectancy[4].

China also largely invested in renewable energy: specifically hydroelectric, wind, and solar power, with the country leading the world in total hydropower capacity and generating a third of the world's wind power capacity. Its use of solar power also has been a rising trend, already surpassing its 2020 goals[4].

While China’s overall trend with air quality is improving, by global standards, its air quality is still concerning. Also, the government regularly revises its coal statistics. This makes it difficult for scientists to determine China’s actual emissions, whether they have been stable, going up or down[4].

Ecological Civilization plans to live harmoniously with nature by using efficient technology. However, with China’s large population size, efficiency may not be enough to mitigate China’s environmental degradation and its global effects. Even with technology that emits low amounts of pollution, with its large population, China’s total pollution would still be large. This is why reducing or even preventing resources used may be a better solution than just using resources efficiently[6].

The development of Circular Economy (CE) in Beijing

Contrast between the linear approach to the circular economy

To ensure that economic development and environmental protection are not in conflict with each other, Beijing has implemented the development of Circular Economy (CE) as one of its main goals in the 11th Five-Year plan, aiming to transform the traditional economic development model[7]. CE is a transition from the traditional linear economic system (where resources are used to produce goods and are discarded after use) to a circular economic system (where resources are used to produce goods and can be recycled back into the system after use)[7]. However, inspired by such concepts, the Chinese government has also formulated its own CE development model[7]. Its focus has now moved beyond just the circular utilization of resources to also include more effective industrial structure development, industrial policy reforms and the development of new technologies[7]. As a result, to build the circular economy around the idea of ecological civilization as well as change the existing model of economic development, Beijing takes energy conservation and comprehensive utilization of resources as its primary measures for economic restructuring[7]. Considerable progress has been made in urban industrial structure adjustment or innovation, energy and environmental conservation[7].

Optimization of urban industrial structures by CE in three areas

Adjustment and regulation of high-polluting enterprises

China’s circular economy has made great progress in system innovation demonstrated by the optimization of Beijing's industrial structures[7]. The government has vigorously readjusted, relocated, cut or even stopped production of some high-polluting and intensive energy-consuming factories such as Shougang Group, the Beijing coke chemical factory[7]. By shutting down some companies with high pollution, energy consumption and emissions, Beijing has managed to reduce significantly its coal usage[7].

Beijing also formulated some plans for the distribution of new high-end industries[7]. High-end industries are characterized by high technology, low pollution and emissions, and have substantial competitive advantages. During the 11th five-year plan period, Beijing has designated 21 cluster regions for cultural and financial industries[7]. These new high-end industrial cluster areas are intended to serve as ‘energy efficiency’ demonstration zones[7]. The Beijing economic and technological development zone, for example, consumes only one-fifth of Beijing's total energy consumption[7].

Through these supporting policies, a positive development has been achieved in solar, wind, geothermal, and biomass energy production, increasing the amount of energy produced through renewable energy sources[7].

To expand solar energy generation, the Chinese govt has initiated demonstration projects and implemented policies such as distributed photovoltaic rewards and heat pump subsidies to incentivize the undertaking of solar power projects by corporations and homeowners[10]. Policies provided $0.30 Yuan per kWH for the first 5 years of grid-connected distributed solar power generation. 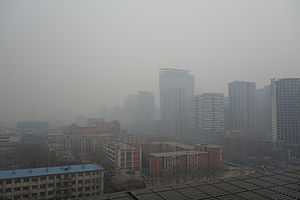 Some examples of the measures taken include the accelerated development of the subway and large capacity rapid transit systems[13], a staggered peak hour plan for small cars, and a license plate lottery where prospective car owners have to draw lots to be able to obtain a car license plate[13]. Studies have shown a very significant reduction as a result of the policies implemented. There has been a reduction of over 50% of SO2, NOx and PM2.5 emissions in 2017, and is projected to reduce over 60% in 2020[11]. Meanwhile, estimated vehicle emissions in Beijing will continue to be mitigated by 74% of CO, 68% of THC, 56% of NOx and 72% of PM2.5 in 2020 compared to 2010 levels[14].

Ideologies such as ecological civilization can have a powerful impact on society. It is a stepping stone towards policy changes, striving to achieve the ideal of a balance between economic prosperity and the environment. Through government actions in a top-down approach, economic systems can be changed to better coexist ‘harmoniously’ with the environment. It is not the policies themselves which are the biggest take-away, but the ability to recognize that the environment should be prioritized. Global warming and climate change is now increasingly severe, and not only harms the economy, but more importantly, people’s well-being.

Ecological civilization has seen some success in Beijing because of the government’s large amount of power. The Chinese government controls all the corporations to an extent, and because of this, they are able to shut down significant numbers of coal plants and set numerous limits to the coal industry.

Despite success, there are still some concerns. The amount of power held by the government means that they can revise and manipulate data whenever they want, making it hard to assess environmental conditions. Also, because local conditions matter, it is important to realize that certain policies that have worked in some places may not serve well for others. One example of this is Beijing’s implementation of driving restriction policies based on license plates, which is a policy that was successful in places such as Buenos Aires in Argentina, but did not produce the same results in Beijing.