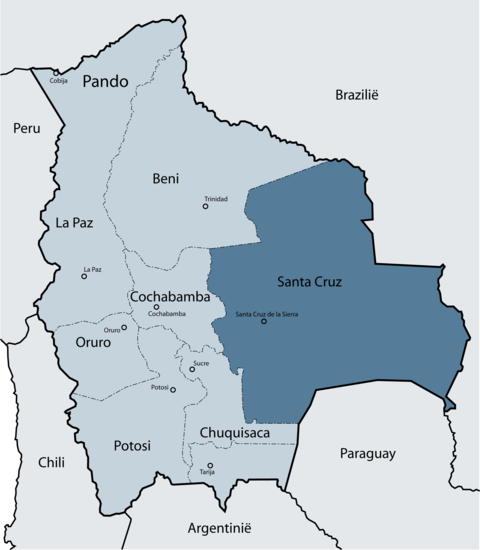 Map of Bolivia in the Province of Santa Cruz, that contains the Guarayos Indigenous Territory via Wiki Commons Public Domain.

Bolivia is one of the most ecologically and biologically diverse countries in the world, due to most of half of its territory (131 million acres) is forested area [1]. With most of Bolivia’s land being forest covered area, indigenous communities used the forest for agriculture and timber. While the Bolivian Amazon rainforest was traditionally cultivated for rubber tapping and brazil nuts, both of those declined in 1990 as the government established timber concessions on rural communal lands. [2].This caused tenure instability between indigenous communities and the Bolivian government, as timber companies harvesting in forest properties were not yet designated. This case study focuses on the Guarayos indigenous people in the province of Santa Cruz in Bolivia, and how the Guarayos community regained autonomy and communal tenure of their land, while creating a co -management arrangement with the Bolivian government.

This co-management forestry case study is located in the province of Santa Cruz, South East of Bolivia. With Bolivia containing 6% of the Amazonian Rainforest, the province contains 90% of the Amazon.[2] With most of the region populated with biodiversity, it attracted large timber companies and agro-industries in the 1980’s for economic gain. During and prior to the 1980’s, The Bolivian Amazon traditionally extracted rubber through rubber tapping, and brazil nuts. Due to the decline usage for rubber and brazil nuts, the government allocated the forested areas to establish timber concessions for economic gain in the 1990s. This led to the government and the country to become highly dependent on timber for national profit. The rapid rise of timber concessions led to high rates of deforestation, where the majority of the land degradation being on indigenous reserves. The Guarayos Indigenous Territory within Santa Cruz had the highest lowland deforestation compared to the other nine Bolivian provinces from 1976 to 2004. [3].

Within the Bolivian province of Santa Cruz is the Guarayos Indigenous Territory, inhabited by the Guarayos indigenous people. The indigenous peoples were given the name “Guarayos”, a translation of “savages”, from the colonizers of the Bolivian Exploration in 1913.[4] The Guarayos Indigenous have been engaged with their environment, territory and forests for thousands of years, using the tropical forest for agriculture and timber. However, the term territory holds different meanings within people and cultural communities. Within the Guarayos community, the concept of territory was beyond land, tenure rights, and ownership; their concept included animals, plants, water bodies, soil, rocks, human communities, and the spiritual connection between all facets.[1]

Land tenure is an important facet of forest governance in Bolivia. Through the early 1990s, the Bolivian government controlled the allocation of forested area and natural resources, where indigenous residents had little to no statutory rights to their land. This led to a large portion of timber sales occurring on indigenous territorial grounds; disregarding indigenous peoples land, needs, and regard. Through the booming logging concessions, government-implemented commercial farms, highways, and ranchers were established and caused growing tension on the Guarayos indigenous peoples as they felt pressure from commercialized stakeholders.[5] This led to the March for Territory and Dignity (Marcha por el Territorio y la Dignidad) on August 15, 1990, where indigenous people demanded sovereignty and autonomy over their land and natural resources. Incorporating the issue of the lack of respect for Indigenous people, communities, and cultures in the low-land of Bolivia.[1] The protest march spanned 650 miles, and incorporated multiple indigenous communities, including the Guarayos peoples. The protest march was created by indigenous peoples forming an activist network organization called CIDOB; the Confederation of Indigenous People of Eastern Bolivia. [6]

The March for Territory and Dignity was deemed a success for Indigenous peoples in Bolivia, and produced the Forestry Ley 1700 law in conjunction with the INRA law in 1996. The Ley 1700 law implemented the regulation of timber harvests, and became a management agreement within the Guarayos Community. The INRA law was created by the Agrarian Reform Institute (Instituto Nacional de Reforma Agraria); a branch of the Bolivian government that implemented recognition of indigenous land, specifically the Guarayos Indigenous Territory. The territory was recognized under this law as a communal property known as TCO territories (Tierra Communitaria de Origen) as original communal land. [7]· The INRA Law in 1996 granted the Guarayos TCO access to forest land based on “usos y costumbres” (use and custom) and the right to commercialize the forest products in conjunction with the forest department.[5] This gave the Guarayos indigenous peoples customary property rights to their forested land and natural resources. Communal property rights entail tenure is owned by a group of persons, and is either statutory or customary. The implementation of the INRA law allowed Guarayos community members to exclude others as property owners of their land, and had communal decision-making powers that were regulated by members mutual agreements. Due to the Guarayos TCO having minimal knowledge of property rights, the Central de Organizaciones de Pueblos Nativos Guarayos (COPNAG) was created as an indigenous organization that represents the Guarayos TCO. Within the same year the Ley Forestry law was in place, COPNAG demanded the Bolivian government to give back 2,194,433 hectares of forest land the Guarayos Indigenous Territory.[5]

Roles of authorities in tenure allegations

The INRA allots tenure allegations on the Guarayos TCO, authorized by the Forest Superintendence. COPNAG receives and represents the Guarayos Indigenous Community and the Guarayos TCO. The Village organizations control the rights to land and natural resources, and decides designating land, and the sale of forest products.

An affected stakeholder is a social actor and is any person, group or entity that is to be subject to the effects of activities in a locally claimed forested area.

Within this case study, all affected stakeholders act on the development of the Guarayos people's tenure roles within forest allocations. Residential members of the Guarayos and the CIDOB are the primary actors affected by forest activities, and have low relative power. This is because both stakeholders solely include indigenous community members, and have only minor power in the effects of activities. This causes COPNAG to have higher relative power, as they are an established organization that represents community Guarayos members and aids in the decision-making process of forest allocations with the Bolivian Government

An interested stakeholder is a social actor and is any person, group or entity that shows interest in the activities in a forested area.

The interested stakeholders are organized from the strongest relative power to the lowest. The Forest Superintendence and The Agrarian Reform Institute both have high allegation power due to being the branches of government interested in the forest land, or the Guarayos TCO. Forest Estate Owners and Logging companies have relative power due to being private owners, and are interested for their personal economic gain. NGO's such as USAID and BOLFORD have relatively low power in the activities in the Guarayos forest territory due to being outside resources. Both USAID and BOLFOR are interested in aiding the Guarayos indigenous peoples technical and financial assistance.

The aims and intentions of the co-management between the Forest Superintendence and the Guarayos TCO was to create an equitable administration system for forest activities within Bolivian territories. This management system placed in 1996 had success in the indigenous community of Cururú within the Guarayos Indigenous Territory. Cururú is a small remote village within the territory, with less than 30 families present when the Guarayos TCO was formed. The village of Cururú had no previous experience in logging and forest operations, however the forests had been logged by timber companies in the past and ultimately had a minimal amount of knowledge on logging operations. In 1999, the Cururú community began a forest management plan where community members formed Asociacion Indigena Maderera Cururu (AIMCU), an organization of the management plan within the village. Due to their lack of experience, community residents received technical, and financial assistance from USAID, BOLFOR, and other NGOs . The community sold standing trees in the primary stage of the project, and negotiated with local loggers to reach an agreement where the community residents made ‘in-kind’ payments of timber to a local company that provided transport for the timber products.

While the co-management strategy had success within a small community in the TCO, from the implementation of the forestry law to present day has produced conflicts and critical issues. A comprehensive weakness of the co-management strategy for tenure access is the weak governance mechanisms at the territorial level in place. With communities such as Cururú with less than 30 families, the Bolivian government has little control over small communities. A secondary weakness is there is pressure from third parties to expand the agro-business and logging concessions. With 90% of Santa Cruz as forested land, the Bolivian government highly depends on its forest resources for economic gain, and still uses indigenous territorial land for agriculture and logging. Another significant weakness is there is insignificant control in areas that are legally titled to indigenous people, but are not physically occupied.

Critical issues of the project is organizations such as COPNAG being compromised as a weak system for representing the Guarayos TCO due to accusations of fraud. COPNAG has had allegations of being influenced by competing interests such as third party businesses interested in the Guarayos TCO for economic gain. [6] Competing interestes and fraudulent accusations caused tension between the indigenous peoples, COPNAG, and with the Bolivian Government. COPNAG is additionally perceived as a weak system for representation of indigenous communities as working at a territorial level ultimately limits the effectiveness of property rights for TCO's. Working at a territorial level is ineffective as customary resource allocation is done at the village level in communities within the Guarayos TCO.

While the Guarayos indigenous residents have benefited from the 1996 forestry law in gaining autonomy of their land, the process and application has had multiple flaws that have caused the Guarayos TCO to currently not have full ownership of their land and natural resources. Conflict decades later and to this day is far worse, despite having central government support. Lowland municipalities such as the Guarayos TCO are still being dominated by powerful economists and politicians, that continue to disregard indigenous people’s rights as a priority. Stakeholders with high powers such as the FS and INRA ultimately use their power in attempts to aid in the restoration of indigenous rights to their customary land. However the failures, conflicts, and critical issues of the co -management agreement outweigh the successes of the management systems. While collective and customary property rights are recognized by the government, the Santa Cruz province still claims authority over forest resources.

For the Guarayos Indigenous Peoples

For the Guarayos Indigenous Peoples, plausible recommendations are to continue and increase community involvement in the initiative of their land. Local community residents that continue to play an active role in demanding recognition of their rights, land and resources will alter their relative power if communities actively participate in management organizations.

For the Bolivian Forest Superintendence and Government

A recommendation for the the Bolivian government, Forest Superintendence and INRA is to search alternative economic sources other than being reliant on timber logging. The reliance on forest products has caused degradation to thousands of hectares of forested land, in addition to the majority being on customary property. An additional recommendation is to include Indigenous peoples in the government powers to provide better mechanisms for community forestry. With local indigenous people and diversity within government positions, it will allow future management strategies to place indigenous peoples and their land as a higher priority.