Course:FRST370/Impacts of the Establishment of Pudacuo National Park on the Neighbouring Communities in Yunnan, China

This case study mainly focuses on Pudazou National Park, Yunnan Province, China. It uses documents to explore the benefits of the establishment of the national park, but also a series of conflicts with neighboring communities. The government has adopted a variety of measures and rearranged the distribution of land interests. Pudacuo National Park has been open to the public for more than ten years, which not only protects the environment but also brings rich economic income to the area, bringing unprecedented development opportunities to the surrounding communities. However, the opening of this national parks is only 13 years old, and documenting further impacts and developments requires further monitoring. 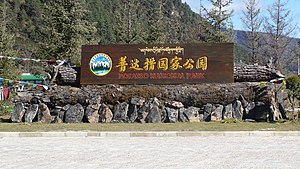 The original forest lakes and other geological landforms in the park are well preserved, with typical alpine meadow and plateau wetland landscape and obvious biodiversity characteristics.

In 1998, TNCs and Planning Commission of Yunnan Province jointly launched the "action plan for the protection and development of Northwest Yunnan". One of the objectives of the plan is to establish a national park system and a nature reserve. Since then, TNC has organized a series of intensive missions, composed of senior officials from central and local administrations, to visit other countries. After years of lobbying, TNC persuaded local governments that national parks were "a viable model for balancing economic and conservation needs."

From 2004 to 2007, the following problems were gradually solved, such as the establishment of project location and the development of master plan, address land use rights and build infrastructure.[2]

In 2015, Pudacuo National Park was listed as one of the nine national park system pilot areas in China. Under the leadership of the provincial Party committee and the provincial government, our [?] prefecture has stepped up the pilot work.

Policy changes in forest resource tenure in Yunnan province after the founding of the People’s Republic of China can briefly be divided into the following phases:

1) The land reform of the early 1950s: Land seized from Landlords was brought under collective ownership resulting in the creation of "Agricultural production cooperatives.[3]

3)The two hills system from 1981 to 1984 onwards: Deforested areas, barren hills and small pieces of forest have been transferred from the hills of the commune as permanent property to families. For other lands, i.e. hills sharing responsibilities, farmers have obtained management rights according to the contract, but the collective has reserved trees and land use rights. (The largest and most productive timber forest land is still owned by the collective, but poorly managed.)

4) Wasteland auctions. : Local governments auction the right to use barren and shrubbery land to farmers, individuals and other social groups in urban areas who have the ability to develop and manage barren land.

5)Implementation of the Rural Land Contract Law beginning in 2002, which defines household contracts as the basis for rural land, while also allowing other contract approaches, such as user groups and collectives. It distinguishes different contract periods for different types of land: 30 years for arable land; 30 to 70 years for forestry land (longer for some specific forests, for which approval from forest management bureau under the State Council is required).[4]

According to the survey, in Pudacuo Nation Park, except the area of Bita Lake Nature Reserve (14,000 ha) and Shudu Lake Scenic and Historic Area (1,500 ha), the remaining 44,500 ha cover a mixture of collective and state-owned lands, nearly all of which are public-benefit forests (gongyilin), which means that timber harvesting is prohibited therein.[2]

Same as Naidu, the tenure and property of forests were chaotic because of the improper management. Although about 40% of the mountain forest in Bitahai (in Pudacuo National Park) is owned by the community, it is greatly restricted. In particular, it is forbidden to cut trees in the park, and the traditional forest utilization mode of the Tibetan villagers is seriously violated.[5]

Before the establishment of National Park:

After the establishment of National Park:

Multiple levels of government, from central to local, have been involved in the establishment and management of Pudacuo. With the aim of integrating the management authority and avoiding overlapping problems, the institutional reconstruction of national parks proceeds at both the provincial and local levels in Yunnan.[2]

At the central level

The State Forestry Administration approved Yunnan as a national park pilot province in June 2008, and supervised the establishment of Pudacuo and other national parks in Yunnan through its subordinate Yunnan Provincial Forestry Department.

At the provincial level

In 2008, a special organization - National Park Management Office (npmo) was established in Yunnan Provincial Forestry Department. Its main function is to coordinate the establishment and management of national parks in Yunnan, especially in the development of relevant guidelines and standards, and to approve the application of local authorities for designated national parks.

At the local level

Diqing state is responsible for supervising the basic management of Pudacuo and coordinating with local institutions. Now, three institutions supervised by the county government operate the park every day: Bita Lake Nature Reserve Station in Diqing Forestry Bureau, Diqing Tourism Investment Company in national assets supervision and Administration Commission and Pudacuo National Park Administration Bureau. In 2014, the Standing Committee of the National People's Congress of Diqing Tibetan Autonomous Prefecture issued the regulations on the protection and management of Shangri La pudagu National Park, which managed the park according to law; the park's development and utilization area was 2.3%, achieving effective protection of 97.7%. The protected area of the park has increased from 141.33 square kilometers of the original Bitahai Provincial Nature Reserve to 602.1 square kilometers[1]. In addition to the Bitahai Wetland Protection Office under the local forestry bureau, the pudacuojing branch of Shangri La tourism investment company and the local community have also invested a lot of human and material resources in forest protection.[5]

The 23 villager groups involved in the construction of the park belong to 2 townships and 3 village committees, and there are two ethnic groups, Tibetan and Yi.[6] More than 90% of the residents are mainly engaged in traditional animal husbandry and collection.[7]

Take villagers from Luorong Village, which is currently the only community in the core area of ​​Pudacuo National Park as an example, There are 33 households with 164 people, all of whom are Tibetans. Most of the residents have only attended schools up to the junior high school and below, and few people are proficient in using Chinese. In the past, their life is very poor. Luorong is a traditional semi-agricultural and semi-pastoral community. The daily expenses are mainly based on digging herbs, selling wild mushrooms, selling small quantities of livestock, hunting or cutting down timber for sale.

In 1995, the tourism industry began to take off. Luorong Village was the closest to the scenic spot of Bitahai. When the villagers encountered the need of horseback riding into the Bita Sea during the work, they sent tourists to the Bitahai Sea. The villagers will be able to earn 20 yuan or 30 yuan each time to carry tourists. The income of carrying tourists will drive the enthusiasm of the whole community to participate in tourism. The farmers earn about 4,000 yuan from the tourism industry every year.

As the number of visitors entering Diqing continues to increase, Bita Sea is still the preferred spot for most tourists. At this time, in addition to the horses, Luoling villagers also do some barbecues and sell handicrafts. The income of farmers is also increasing. The income of each household can reach 7,000 yuan to 8,000 yuan per year. Tourism has become an important source of income for Luorong villagers.

After the establishment of Pudacuo National Park， they obtain benefits through tourism reception, singing and dancing performances, and maintaining public security and ecological protection.[8]

The government established it to obtain RMB 200 million (US$24 million) in bank loans for the construction of new tourism infrastructure in the park.[10]

It is the operators of Pudacuo National Park.

They are the direct users of the park recreation experience.[6]

1. Protect biodiversity. There has been no major environmental damage and wild activities within the park The case of plants, the ecosystem of the park is getting better and the environmental quality is constantly optimized.[1] E.g. Visitors cannot drive into the park; instead, they must use natural gas-powered green buses on new, well-structured roads. The bus station has a composting toilet and a pontoon nature trail that lifts the hikers onto the fragile wet grass.[10]

3. Increase the economic income and employment opportunities of local residents. Community villagers can get a certain amount of subsidy from the park every year. And the National Park Administration will give priority to arranging villagers to participate in park management and service, providing more than 300 tourism posts for villagers. There is one person working in the park in almost every household of the community.[8]

5. A small number of local Tibetan residents said: "the park is national; we have the responsibility to protect it... " The National Park gradually wakes up the national consciousness of the local community. Pudacuo National Park also makes different stakeholders begin to pay attention to national culture.[7]

In order to bring common benefits to the community and villagers, such as economic income, employment opportunities, education, infrastructure improvement, etc. The community ecological compensation system should be implemented, for example: (1) Establish the average basic compensation standard of per capita and family (2) In combination with the specific situation of losses suffered by different communities, set up tourism management service project compensation, scenic area land acquisition compensation, etc. (3) Provide funds for environmental remediation and infrastructure construction.[6]