From UBC Wiki
< Course:EOSC311
Jump to navigation Jump to search

Natural resource conservation is a field of science aimed at preserving and protecting all aspects of the natural world. Including but not limited to wildlife, forests, rivers, oceans and land. Natural resource conservation is an interdisciplinary field, drawing from numerous disciplines such as economics, forestry, biology, ecology and soil science. One of these disciplines that's importance in conservation cannot be understated is geology. Geology is intertwined in the study of natural resource conservation and can be applied to almost any current conservation issue in some shape or form. In order to protect or sustainably use our resources, it is important to first understand the complex geographical phenomena that led to its existence in the first place. Understanding these geographical phenomena can help inform conversationalists and aid in the formation of potential solutions or important decisions. In essence, this page explains why geology is so important to the field of conservation. In order to evaluate and understand the problem, geological phenomena must be understood in depth before conservationists can provide protection or solutions. In this wiki post I will discuss what groundwater is, its importance in modern agriculture and how anthropocentric influences are contributing to declines in groundwater health and abundance. I will also discuss possible solutions to groundwater issues, particularly pertaining to agricultural use. As someone studying natural resource conservation this topic is very important to me. An extremely large percentage of the world relies on groundwater for not only drinking water but also for food. Protecting this resource is essential and if we as humans want to continue to consume at such high amounts there must be some sort of change. 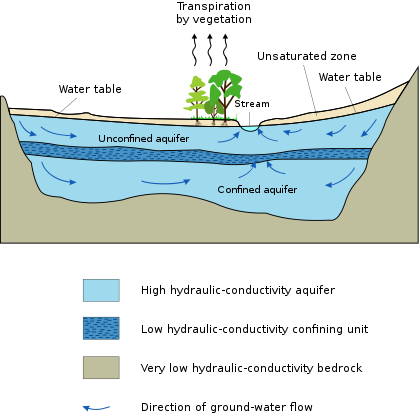 Simply put groundwater is water held underground in crevasses, pores in rocks or held in soil. Groundwater can come in many forms including soil moisture, permafrost and oil formation water however, the largest and most important form of groundwater comes is aquifers[1]. Aquifers are bodies of water-saturated sediment or rock below the surface of the earth, which can come in three forms, confined, unconfined and perched.

Confined aquifers is a collection of saturated water that exists both below and above layers of impermeable rock. These aquifers can neither attain or lose water from sources above or below them and instead gain water from sources further away from the aquifer where permeable layers exist[1]. Due to their lack of permeability, pressure can build substantially in confined aquifers. This is what allows man made wells to draw water above the natural water table and closer to the surface of the earth, reducing the amount of pumping required.[1]

The Importance of Groundwater in Modern Agriculture

Groundwater representing an estimated 97% of all fresh water and 0.061% of all water on earth.[3] It's large abundance has been essential in the growth of many societies and nations, providing drinking water and allowing large scale agricultural production and economic growth. Agriculturally speaking groundwater is the perfect commodity, providing numerous unique benefits like no other commodity can. Groundwater is available directly on demand unlike any other natural source of water, allowing for pressurized irrigation and high productivity, precision agriculture at low capital cost.[4] As a result, groundwater has been exploited globally and has become one of the most important resources in the world, aiding in the growth of modern agriculture. Globally, 70% of known aquifers are used exclusively for agriculture, with almost 40% of all agricultural land being 'waterwell equipped". [4][5] Since 1960, India has increased groundwater irrigated area by 500%, utilizing approximately 90% of its groundwater for agriculture, at an estimated 226‬ cubic kilometres of water per year on agriculture. [4][5] China, the second largest user of groundwater, utilizes 54% of their groundwater for agriculture at around 60 cubic kilometres of water annually for agriculture.[5] In North America, groundwater usage follow similar trends, with 71% and 64% of all ground water being used for agriculture in the U.S and Mexico respectfully.[6] Canada diverts much less of its groundwater to agriculture then the aforementioned countries at only 43% of groundwater, however a staggering 89% of Canadian agriculture rely on groundwater to feed their crops.[6] It's clear that much of the world has become reliant on groundwater as a resource and with ever-growing populations and increasing extraction, fears of aquifers 'drying up' are becoming more and more imperative. However before we can discuss possible steps to circumvent future water shortages, it is important to understand the problems around groundwater usage in detail. 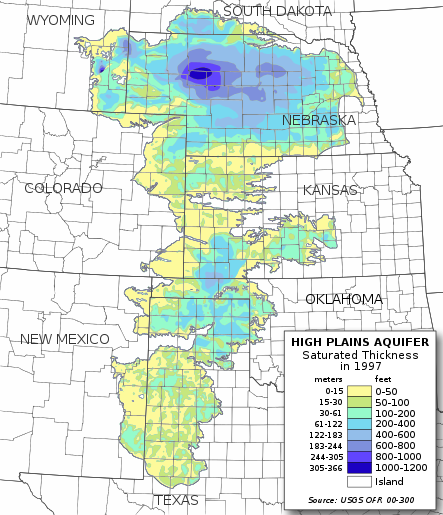 The Ogallala aquifer size and saturated thickness as of 1997

The most pertinent and obvious issue to groundwater security is how much is available to extract and how long it will last us. Currently there is an estimated 22.6 million cubic kilometres of groundwater on earth with anywhere from 1% to 6% of that total located close enough to earths surface to be available for agriculture use.[7] Despite large knowledge gaps on potentially undiscovered aquifers, we can however accurately predict how long existing aquifers will last. This is done by taking into account the groundwater recharge rate current, current usage and size.

Groundwater recharge rate is simply the rate at which water from the surface of the earth percolates downwards and enters an aquifer.[8] Groundwater sources can come from any form of precipitation as well as permafrost melt, lakes and rivers. [8] Water will move through the soil at different rates depending on local climate, soil and anthropocentric conditions. Regions with high annual rainfall will result in more water entering the soil and a higher infiltration rate than drier climates.[9] Moreover, climates that have a high annual temperature will promote higher rates of transpiration and evaporation resulting in more water leaving the soil than in cooler climates.[9] Very cold climates may promote the formation of permafrost or year-long snow preventing any percolation. [9] Percolation rates are also largely to do with soil conditions. Soil with high amounts of sand permit the highest recharge rate, due to the large pore space between soil particles. [10]Soil with high amounts of silt have smaller pore spaces than sand, requiring more time to percolate, while clay has the smallest pore space and therefore the slowest percolation. [10]Within soil it is also important to recognize that organic matter and living plants play a role in percolation as well. Organic matter has a strong water holding capacity through adhesive forces. Likewise, Plants uptake a large amount of water through their roots stems and leaves, resulting in lower amounts of percolation. The last factor that has direct impacts on soil permeability is the influence of anthropocentric objects. This can include anything from sidewalks, roads, buildings or essentially any object created by humans that obstructs water from entering the ground. [11] With development of new infrastructures globally, this has started to become more of an issue for water percolation and has shown to change groundwater table patterns in some regions in China.[11] Essentially anthropocentric structures prevent natural percolation, and lead to the re-direction of surface water where it then percolates in different soil, evaporates or is discharged in rivers, lakes or oceans.

Recharge rates vary from aquifer to aquifer, however, no matter the aquifer it is generally regarded as a slow process. Rates can be anywhere from a meter per day to a few centimetres in a century, although, rates of a few feet per month are most common.[1][12] Due to this many near surface usable aquifers can be anywhere from a couple decades to thousands of years old.[13] Yet despite slow recharge rates aquifers are being drained in regions around the world, with extraction rates far surpassing recharge rates. An estimated 14-17% of all food produced with use of groundwater relies on unsustainable mining of groundwater resources and has led to significant decline in major aquifers such as the the upper Guadiana basin of Spain, the Western Sahara and Nubian Sandstone aquifer systems of North Africa, aquifers of the Arabian peninsula along with many more in India, China, Australia and the U.S.A.[14][15] One of these aforementioned aquifers has recently caused many to worry about the food safety of America in the near future as it provides around 30% of all groundwater for irrigation in the United States[16]. This aquifer is the Ogallala aquifer which is located in the high plains of the United States. The Ogallala aquifer is a massive unconfined aquifer around 450,000 km² and is embedded in eight states including South Dakota, Nebraska, Wyoming, Colorado, Kansas, Oklahoma, New Mexico, and Texas.[17] However despite its size, the aquifer has dropped by more than 300 feet in some areas since the 1940's and has experienced a 30% decline in the Kansas portion of the aquifer and at current rates is expected a further 39% decline[18][19]. Protecting and preserving the Ogallala aquifer is essential for agriculture stability in the future. If depleted, it will take around 6,000 years to naturally replenish and will result in a 30% loss of all agriculture in a country with an ever-increasing population.[20][16]

As the water table on land decreases, the stronger hydraulic pressure in the ocean can cause saltwater to be pulled into the freshwater aquifer on land

Another major issue to groundwater safety is groundwater contamination. Groundwater contamination occurs when pollutants are introduced into groundwater or naturally make their way into groundwater. Some major anthropocentric sources of contamination include septic systems, pesticides, fertilizers, herbicides, uncontrollable hazardous waste, landfills, atmospheric contaminants and leakage from storage tanks of gasoline, oil or chemicals.[2] A collection of these different containment sources have led to the deterioration and loss of many aquifers globally including China who released a statement saying that around 60% of their groundwater was contaminated in 2014.[21] Contamination can also come in natural forms. In coastal areas where groundwater pumping occurs, the higher mineral content and density of saline water, can cause saline water to push inland into groundwater sources due to a higher water pressure. Seawater intrusion risk increases the more that water is pumped and the water table is brought down, caused many issues in coastal communities reliant on groundwater including Florida, Prince Edward Island, Nova Scotia and New Brunswick to name a few.[22][23] Water moving through certain soils and sedimentary rock can also have detrimental effects on groundwater safety as they can pick up compounds such as calcium, magnesium and chlorides which in large concentrations can contaminate groundwater, making it unusable for agricultural or domestic use.[24]

With the many growing issues over groundwater availability and security, it is clear that something needs to change in the near future. Although these suggestions only merely scratch the surface, implementing these 5 new technological or policy related changes to groundwater extraction may prevent future shortages and preserve the essential resource for future generations.

Geological proficiency is essential to understanding and maintaining modern agriculture. Groundwater has proved to be an essential resource for the agricultural industry, providing the large majority of water for many major crops throughout the world. Geologically understanding the processes that influence the spatial and temporal recharge rates of aquifers is crucial to understanding the underlying issue surrounding groundwater. Through our discussion it has been made clear that without change in agricultural extraction of groundwater, many aquifers will steadily decline in size. Potential technological innovations, policy shifts and alternative crop production have displayed a potentially positive shift to a new form of irrigation. However, these possible solutions must be applied at very large scales, which may be difficult with such large economic barriers. It is also important to recognize that although these solutions may aid in groundwater overuse, the heart of the issue is that we are simply consuming too much. Groundwater as a resource cannot support the current rates of agriculture forever. As long as water is extracted at a higher rate than it is recharged, the water table will continue to fall.