Course:CONS200/The Opportunities for and Challenges of Saving the Marbled Murrelet

Brachyranohus marmoratus, commonly known as the marbled murrelet, is a small North Pacific seabird, which is a member of the Alcidae (auks) family. Marbled Murrelet are currently facing troubles of survival. With Their habitat close to British Columbia, we are obligated to conserve and preserve this species. We shall discuss the challenges and opportunities to save the marbled murrelet . Some common challenges the Marbled Murrelet faces are anthropogenic like Oil leakages [1]; small and major oil spills off shore. With major oil spills, it affects Marbled Murrelet’s main source of nutrients, since fishes are their main source of their food supply. Massive harvesting of fishes on open water causes marble murrelet to be tangled in these fish nets, which they cannot break free [2] and eventually dies. Logging of their nesting trees causes a huge decline, because of how human overconsume the natural resources to make products. Not only is this affecting the marbled murrelet’s lifespan rate, it affects all other animals in the ecosystem. Not only is human influences causes their decline, low reproduction rates and predation risk also increase the risks faced by the Marbled Murrelet [3]. While there are many challenges facing the Marbled Murrelet, it is marked as an endangered species in 2002. Marbled Murrelet is also protected by the “federal Species at Risk Act (Sara) with “protecting the birds nest, eggs from willful damage.” [4]. 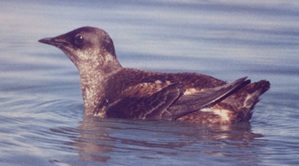 The marbled murrelet displays a district feature during winter. It darkens “its back to black, and sides, belly and wing become white” [5]. This colour scheme camouflages the marbled murrelet from predators on the waters and in their nest. As a North Pacific seabird, the marbled murrelet is commonly found along “the Pacific coast of North American from the Aleutian islands to central California.”[6]. Human intervention and environmental factors have caused the population of the murrelets to decline drastically. With their dependency on old growth trees to nest, the murrulets’ offspring have also decreased. The marbled murrelet was first marked as a threatened species in September 1992. However, it wasn’t till 2002 that Canada, Washington, Oregon and California first acknowledged it as being “threatened.” Given the 20% decrease of the population over the past three generations, the Committee on the Status of Endangered Wildlife in Canada (Cosewic) projected that in 2012, the new “projected population’s losses [would] exceed 30% over the next three generations.” With a projected overall 50% decrease of the population in the upcoming years, this paper discusses the opportunities and threats for the survival of the marbled murrelet.

The biggest threat to the marbled murrelet is its loss of habitat. That loss of habitat poses a severe threat to the murrelet population since it the threat is continuous, historical and widespread [2]. Marbled murrelets nest on large, mossy limbs in the canopy of large conifers (30 m or taller) in old-growth forests within 50 km of the ocean. Very rarely, they nest on the ground and in order deciduous tree [7]. Risk modelling indicates that the marbled murrelet population is sensitive to the amount and quality of nesting habitat[8]. Habitat loss is the result of forest operation such as clear cutting for agricultural use or urbanisation. Since the early days of European settlement to the late 1900’s, the estimate loss of total costal old growth forests, of which marbled murrelets use for their nesting habitat, ranged from 35% to 53%. However, between 1978 and 2008, the suitable forest nesting habitat declined by 22%.

Oil leaks, whether chronic or acute, pose another significant threat to marbled murrelet habitats and have caused a high mortality rate among the seabirds. As mentioned, the marbled murrelet spends most of its time at sea or within 0.5 km of shore, so they are especially vulnerable to coastal oil spills, in conjunction with loss of nesting habitat and mortality in gill nets [9].

Marbled murrelets also face the threat of increased predation risk. There has been an increased number of predators of adults, chicks or eggs found in the forest habitat of marbled murrelets. Those predators include falcons, accipiter hawks, owls, jays, ravens, crows and arboreal rodents. Predator populations recover more easily from past DDT impact and human activity, such as logging and garbage dumps, which provide them with food and habitats.

In addition, low reproduction rate poses another threat to the marbled murrelet. Marbled murrelets are slow to recover from negative environmental impact because they do not begin to breed until they are 2-3 years of age, and every mating season only reproduces a single egg.

In facing these challenges, the marbled murrelet was listed as a threatened species by the federal government in September 1992 [10]. That brought some attention to the crisis, initiating several protective activities. However, these actions were unable to stop the continuing declining of the loss of habitat and the loss of companions for the marbled murrelet. In 1994, a protection plan was set for land use on federal lands among Pacific Northwest regions, known as the Northwest Forest Plan. Statistically, 88% of the federal land was protected under this plan, and it was successful. Only 2% of the habitat was lost due to fire disturbance. Because of the timber activities, the non-federal land experienced a greater loss, about 12% [11].

From the Northwest Forest Plan, it is not difficult to realize that the problem of the marbled murrelet habitat loss has not been solved. Slowing down the loss of habitat is not enough for protecting the marbled murrelet. We need to do more to rebuild their lost homes.

At the same time, scientists have also been working on ways to save this threatened creature. As a threatened species, the low fertility or the seabird accelerates its decline. As mentioned, the marbled murrelet can only reproduce one egg each year, and that egg is a favorite food for some predators. Portia Halbert, an environmental scientist, who prepared trick eggs for predators, said: “We inject about .24 ccs of the chemical Carbocal into the egg. It makes you feel ill.” [12]. Halbert hoped that the predators would not want to eat the eggs again when they tasted these terrible-tasting trick eggs. According to University of Wisconsin-Madison’s research, the number of egg predators, such as common ravens and steller’s jays, dramatically increased while the marbled murrelet was facing a serious habitat loss [13]. Fortunately, Halbert found that about 75% of the steller’s jays, one of the most intimidating predators, refused to eat the egg again after tying the trick egg [12]

One way save the marbled murrelet is through environmental control, as the two examples above cite. However, what about our human activities? Do human activities pose a larger threat to the marbled murrelet? First, human food in the summer has caused the dramatic increase of steller’s jays [13]. During the summer time, numerous people camp and provide food to these smart predators. In 2013, member of the Centre for Biological Diversity, Shaye Wolf suggested that the campsites should be closed to protect the marbled murrelet. The effort from Wolf and her team was realized: the administrative department agreed to create a new program for garbage disposal [12]. However, what else can we do to control the excessive logging problems on the marbled murrelet’s habitat? I would suggest enforcing restraint laws. For example, for those regions that are facing serious problems, it might be wise to only open one season for logging or close it for the whole year. In slightly destroyed regions, it makes sense to open it for half the year for logging. The punishments of deregulation need to be strict and severe. Additionally, awareness of the problem is important as well. Our children should be taught to protect animals and their habitats. Protection of threatened species and their habitats is an essential part of everyone’s education, but especially that of the young. Not only do we need to protect the threatened marbled murrelet today, but every species for now and the future.

Education will help with furthering accurate understanding of why the marbled murrelet population is declining due to human activities such as logging for wood; destruction of the natural habitat; oil spills; overfishing; and an increased population of predators. As conservationists who recognize such problems, we should aim for the species’ survival. With the marbled murrelet marked as G3 on the global conservation status ranks, scientists and groups like Cosewick have already established programs, like the Northwest Forest plans and garbage disposal programs, designed to keep the habitat safe for the marbled murrelet. By understanding such plans, the public should also be familiar with the threatened species and support it by cleaning up our environment, engage in less logging to conserve our habitat for other species, and last of all, preserve the marbled murrelet for our future generations. We inherit the world from the previous generation, and it is our obligation to pass it on in a reasonable condition to the future generations.