Course:CONS200/2020/The rewilding movement in Scotland: the pros and cons

Scotland is a country positioned in the northern reaches of the United Kingdom. Over the past century, the country has seen significant land use change, resulting in species dynamic shifts. Conservationists in Scotland and North America have been pushing for increased recognition and restoration of native Scottish ecosystems since the 1990s[1]. This wiki page will examine the social, cultural, economic and ecological pros and cons of the ongoing movement in Scotland to conserve species integral to the health of Scottish ecosystems.

History of Rewilding in Scotland

Rewiliding is a strategy for the conservation ecosystems, primarily involving the protection and reintroduction of keystone species. Keystone species are species that have a structural role in their community disproportionate to their abundance, often being large, wide-ranging predators [2]. A prime example of a rewilding venture is the reintroduction of Eurasian beavers in Scotland. Eurasian beavers were once an abundant species through Scotland until man began to hunt for their pelt and castoreum [3]. Once the repercussions of mass hunting beavers were noticed, conservationists were keen to re-introduce the beaver in order to help Scottish wildlife prosper.  The initial impact of the beavers was the physical transformation of the landscape such as dam-building, burrowing and canal building which immediately created new micro-habitat niches for freshwater species that strive in different current velocities and water depth [4]. 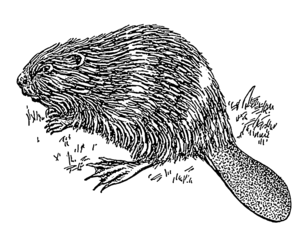 Beavers were once present in large numbers across the UK as well as the rest of Europe. Due to hunting, they became nearly extinct in Europe and completely extinct in the UK during the 16th century. By the 1990s, beaver populations in much of Europe had been restored although the UK had yet to make any efforts. Beginning in 2009, Beaver populations were successfully reintroduced across Scotland[5]. These new beaver populations resulted in improved ecosystem health because of the hydromorphological changes they caused on land previously degraded by agricultural use[6].

Anders and Anne Holch Povlsen are Scotland’s largest private landowners and own more than 80,000 hectares of land across the Highlands of Scotland. Through intensive culling of sheep and red deer they hope to allow native species to thrive and restore the land to its former health[7]. Their company “Wildland” has a 200-year plan to help restore habitats and improve ecosystems through the reintroduction of important plants and animals such as planting diverse tree species to replace monoculture pine farms[8].

Trees for Life is a Scottish non-profit organisation dedicated to rewilding the Scottish Highlands by revitalizing the Caledonian Forest which once covered a large portion of Scotland. Because of grazing by overpopulated goats, sheep, cattle and wild deer along with felling for timber and farmland, only one percent of Scotland’s original Caledonian Forest remained in 1950. Trees for Life is bringing back these forests by reintroducing important tree species like Scots pine, as well as mountain top willows and birches in order to allow the full range of native tree species to grow. In addition to tree planting, Trees for Life hopes to bring back animal populations such as wolf and lynx to the forest to restore the entire ecosystem. Most notably, Trees for Life has successfully reintroduced red squirrels to the North West Highlands of Scotland where the animal had not been present for more than 50 years[9].

Arguments for Rewilding in Scotland 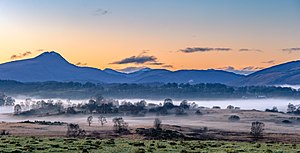 The eco tourism industry in Scotland is worth 1.4 billion Euros annually[10]. This number shows the importance of the eco-tourism industry for Scotland's economy. The disappearance of the eco-tourism industry due to land degradation would negatively effect Scotland's economy. Much of Scotland's land use is Agricultural, a study by Taylor et al. hints that economic benefits and employment stability are five times higher on rewilding projects than agricultural land uses[11]. Agricultural land uses will also be more heavily impacted by climate change than an ecosystem that has been rewilded because the externalities of increased disturbances such as wildfires and floods will be felt by local Scotish economies if a site remains agricultural[12].

Ecosystem resilience can be defined as "the ability of an ecosystem to maintain its normal patterns of nutrient cycling and biomass production after being subjected to damage caused by an ecological disturbance"[13]. Scotland is projected to have increased ecological disturbances, therefore rewilding through introducing native plants and animals such as beavers and wolves will increase Scotland's capacity to maintain a healthy ecosystem[1]. An increase in species diversity will also allow populations in Scotland to be adaptable and resilient to the threats of climate change and land degradation. Many estate owners in Scotland have started to acknowledge the importance of healthy, diverse ecosystems, therefore there has started to become a shift in land use of estate owners from agricultural to restoration based land use[1].

Aldo Leopold was the first person in the field of conservation to recognize nature as a place that humans are a part of instead of separate from. Leopold also recognised the importance of environmental stewardship in maintaining stable ecosystems. Leopold's Land Ethic has contributed to the framework that modern conservationists use to asses proper management of ecosystems. In Scotland, Leopold's land ethic has resonated with local conservationists, and his land ethic is the underlying argument behind the need for Scotland's community to rewild their landscape[14].

Arguments against rewilding in Scotland

The biggest argument against rewilding can be made in context of wolf reintroduction to farmland. Wolves would be reintroduced as critical keystone species that would cull the overbearing red deer population and restore ancient Scotch pine Caledonian Forest in the Scotland Highlands[15]. Farmers in the area take issue to this for two reasons. First, they are worried about potential human-wildlife conflict that could ensue upon reintroduction[16]. Second, they are also aware that due to a growing world population, much of the fertile land that has agricultural potential would be reserved for regrowth of forests and wolf populations[16]. While there has been evidence showing that European countries are on a trajectory to use more intensive farming methods using less land, therefore largely disproving this second argument, its still remains a subject of heated debate between traditional landowners and conservationists[16].

Another concern among certain conservationists is how rewilding efforts can be made available in urban areas, as it can seem like something only reserved for areas far removed from the public. However, rewilding efforts are not just limited to introducing a single organism. An example of a rewilding effort in northern England is the refortifying of wetlands by the Yorkshire Peat Partnership[1] that helps to prevent coastal flooding by sphagnum moss absorption[17]. This project has the potential to lessen the impacts of sea level rise on coastal towns by additionally preventing erosion[17]. Despite this, there is no such effort being conducted in Scotland as the majority of rewilding efforts are centered in rural areas removed from urban settings or attention.

The goal of this project is to create better understanding of the ecological and social benefits of an expanded Scottish wild forest network, in hopes that more land managers active in forest restoration work to improve understanding the natural processes and habitat connectivity in functioning living systems, including the beneficial effects of restoring key species in Scotland such as beavers and apex predators. Several successful rewilding initiatives exist in scotland, most notably through private organizations. These efforts have benefited the economy, created more resilient ecosystems, and enriched scottish culture despite potential clashes with current land use, and concern over lack of rewilding in urban areas. Rewilding in Scotland is a method of protecting our environment that has shown success, but it is just a small piece in the puzzle of conservation.