Course:CONS200/2020/The Fate of the Snow Leopard in the Mongolian Steppe: The Importance of Grassland Conservation 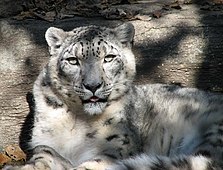 An adult snow leopard in captivity.

The Mongolian-Manchurian grassland region of the eastern Eurasian Steppe.

The Panthera uncia (snow leopard) is a solitary animal that has faced numerous pressures on its existence, warranting its status as an endangered species[1]. It inhabits the Mongolian Steppe, the largest fully intact temperate grassland[2]. The Panthera uncia has been threatened by climate change leading to habitat degradation[3], agriculture, expansion of infrastructure, and hunting[4], along with numerous other threats to their survival. Due to these disturbances, their range has been reduced by 69% in size[5]. The Panthera uncia is facing an increasing risk of extinction, and conservation efforts must be put in place to protect them. Although sustainable grazing methods are utilized in the Mongolian Steppe[6], more must be done to conserve this predator’s habitat.

One effective solution proposed is the implementation of solutions centred around community involvement and stewardship[1]. Another solution already in place that can be expanded is the expansion of sustainable grazing management practices[6]. Additionally, conservation of the Panthera uncia can assist in the conservation of other sympatric species[7] like Lynx, Wolf, and Red Fox[8].

Key Changes on the Mongolian Steppe

Geographical representation of Mongolia in relation to the globe. Green: Mongolia.

Environmental Changes in the Mongolian Steppe

The Mongolian steppe is degrading quickly, it experiences higher temperature (increase by more than 2 degrees since 1940), less rain (by 7% also since 1940), and increase in goat population to 20 million by 2008[10].There has also been an increase in fire events, leading to a greater decrease in vegetation cover.

Climate change and land-use change are the expected factors to have the most effect nomadic pastoralism[11]. And due to socio-economic changes grazing patterns affect the demography of pastoral people[11] as well as causing an increase in the goat population [10].

Effect of Changing Habitat on the Panthera uncia

However Panthera uncia response to resource extraction of their range is poorly understood[9]. Up to 70% of livestock contribute to the Panthera uncia diet[9]. High livestock population leads to a suppression of wild prey population due to competition of resources [9].

Conservation Plan in the Mongolian Steppe

As of 2008, there are over 22.4 million hectares of protected land in Mongolia in 72 federally protected areas[14]. However, within these protected lands, grassland and steppe ecosystems remain poorly represented[14]. In totality, about 2.0% of steppe, 2.7% of forest-steppe, and 3.4% of desert-steppe ecosystems are designated as protected areas[14]. The World Wildlife Fund has designated the Mongolian-Manchurian grassland as critically endangered[15].

In 1992, the Mongolian government established a goal of protected 30% of the countries area[14]. The Chinese government has also made efforts to conserve the endangered habitat. Three notable conservation projects were established that protected the grasslands of the inner Mongolian Steppe[16]. They are the Beijing-Tianjin Sand Source Control Program (established: 2001), the Grazing Withdrawal Program (established: 2003), and the Ecological Subsidy and Award System (established: 2011)[16]. All three focused on overgrazing, which is a key contributor to the degradation of grassland ecosystems. Various methods were used to control this problem. Seasonal grazing was established, wherein pastures could only be grazed during times of growth (April to November) and pastoralists were compensated[17]. In severely degraded grasslands, grazing was completely prohibited until the habitat could return to its original condition[17]. The number of livestock that was allowed onto a grassland was limited based on the carrying capacity of the habitat, and nomadism was substituted for indoor rearing[17]. Additionally, employment opportunities in cities were also provided to incentives individuals to change their profession from agriculture/husbandry to urban employment[17]. 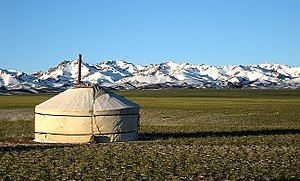 A ger with the Gurvan Saikhan Mountains in the background

In 1995, the German government, in collaboration with the Mongolian government, began funding a joint initiative known as the Conservation and Sustainable Management of Natural Resources, which introduced buffer zones and management councils for areas surrounding the Gobi Gurvan Saikhan National Park[16]. This is was created to address concerns regarding the sustainability of herd and national park management practices.

Conservations Plans for the Panthera uncia

Portrait of a male snow leopard (Panthera uncia) of the Rheintal zoo.

The government of Mongolia has designated the Tost Mountains as a Nature Reserve[18]. The designation of these mountains as such links the Great Gobi Protected Area and the Gobi Gurvansaikhan National Park, creating a continuous protected area in the habitat of the Panthera uncia[19]. Under the designation of Nature Reserve, only traditional economic activities that do not harm the environment, such as herding and grazing, and permitted[19]. Mining, construction, and hunting, all of which have significantly threatened the Panthera uncia population[19], are prohibited[19].

This designation is especially important because it protects the wild prey of the Panthera uncia, which are native ungulates such as the Capra siberica (Siberian ibex) and the Ovis ammon (Argali)[19]. Native ungulates are threatened by the increase of the global cashmere trade, which has encouraged herders to focus on increasing the number of goats they produce at the expense of the ungulate’s grazing ground[19]. Because of this reduction in wild prey, the Panthera uncia feeds on livestock, prompting retaliation killings by herders[20]. 20% of the Panthera uncia’s diet in the Tost Mountain area consists of livestock[21], and by elevating the status of the Tost Mountains to a Nature Reserve, the Panthera uncia’s wild prey sources are conserved as well, allowing them to rely less on livestock as a food source[21]. This linkage occurs because the Panthera uncia is an umbrella species[22], meaning that when their habitat is conserved, many of the other organisms who occupy that habitat thrive as well.

The logo of the World Wildlife Fund (WWF)

Non-Governmental Organizations (NGOs) such as the World Wildlife Fund (WWF)[23] and the Snow Leopard Trust in partnership with the Snow Leopard Conservation Foundation (SLCF)[24] have worked in the Mongolian Steppe to promote conservation of the Panthera uncia.

WWF works with local ecosystems to provide financial incentives against retaliation killings of Panthera uncias, such as the ‘Buy the Goat’ programme, in which the WWF replaces all goats killed by the Panthera uncia in a given year, provided that the affected community does not kill any Panthera uncia in relation during that time period[23].

Additionally, the WWF promotes a program called Snow Leopard Enterprises[23]. This program is run by the Snow Leopard Trust, and trains herders in the Mongolian Steppe to create handmade goods that can be sold as a source of alternative income[24]. This helps herders diversify their income, moving away from a financial reliance on herding[23]. In addition, participants of Snow Leopard Enterprises receive a 20% bonus on all sales if the community goes a year without killing any Panthera uncia[23].

In order to combat retaliation killings of Panthera uncia by herders when their livestock is killed, the SLCF has introduced a community-managed livestock assurance scheme[25]. In this program, herders are compensated for any loss of livestock, provided they sign conservation contracts and pay premiums[25]. 17.3% of herders in the Tost Mountain region participated in 2015[25].

With the ever increasing human and livestock population, increasingly more pressure is put onto the fragile alpine ecosystem that Panthera uncia depend on[26]. Moving forward, integrated conservation strategies not only need to include the evolving factors of climate, but also consider the ecological and anthropogenic impacts[27]. Current remedial actions operate on the basis of practical field based solutions, and has yet to consider further sociological evaluations. Current Snow Leopard Survival Strategy[26] recommends strategies of "promoting livestock and grazing practices to reduce vulnerability to predation and more use of natural predator deterrents such as hearing dogs"[26], but with the ecosystem's unique nature, the conservation of Panthera uncia is largely dependent on the involvement of local people who are well equipped with knowledge of the terrain– requiring extended incentives for community involvement[27].

At a local level, there is a lack of awareness amongst policy-makers on moving forward with conservation; ineffective policies for the species-prey relationship stem from poor knowledge of conservation principles, hence no effective protective measures are in place and neither are required resources and equipment available[26].

By providing adequate education to the public, local officials of affected areas[28] and stakeholders of future conservation actions will have improved knowledge on the wider range of issues. Studies of biology in species distribution, migration and movement, and impact on human activities within the system is essential for understanding the dynamics of wildlife and livestock interactions, livestock depredation rates and causes, poaching, illegal trade, monitoring techniques, and human attitudes towards the species [29].

Cooperation and education is an integral part in the conservation efforts moving on. Exposure on the benefits of conservation can positively influence the attitudes and involvement of local communities, any involvement with the population that are under direct impacts by any policies made, and should then be involved with the decision-making process[14].

Existing poverty in these areas ties numerous issues together, and this connection shows the relationship between biodiversity conservation and well-being of the local people[29]. There is potential for private land owners to adopt complementary uses and values of the plains, where nature-based tourism can be introduced to complement existing cultural-based tourism[30]. Taking from existing interest in "dude ranches" and American Plains culture in the United States, Europe, Australia, Japan[30], it encourages biodiversity conservation as an added amenity to tourism operations through nature based tourism in the Plains as well.

Trophy hunting programmes need to be sustainable; the nature and extent of these programmes need to be closely monitored to reduce poaching and trade"[26]. With the troubles of existing medicinal culture, there needs to be increase in social and legal pressures[26], increasing awareness amongst manufacturers, pharmacies, and customers– predominately within its own local populations in China[31].

Considering the overlap of national borders, transboundary cooperation can increase enforcement of national and international trade laws[26]. The culture of poaching and trade not only can be approached from further education, tackling existing corruption[26], but an increase in exchange and communication among the related wildlife management authorities can help tighten wildlife conservation law enforcement on the notable trading routes of Songpan, Sichuan and Kashgar, Xinjiang[32].

Moving forward, the sustainability and health of the environment reflect the area's general wildlife conservation values, and the future of such a crucial umbrella species depend on attitudes and actions of local people in immediate contact with them, and the support from local government[26].