Course:CONS200/2020/Assisted migration of trees in B.C.: Introduction and key debates

Forests are climate sensitive, and climate change can lead to natural selection and seed migration in tree populations, which help trees to grow in places with suitable climate[1][2]. However, recent studies suggested that the rate of climate change is outpacing these evolutionary forces, and there have been evidences on the impact of climate change to forests across Canada[1][3]. In order to avoid maladaptation of plants, humans have invented a strategy called assisted migration. Assisted tree migration, first proposed by Peters and Darling in 1985, focused on selecting adapted plant species and moving them mitigate the impact of climate change on plants. In this since, genotypes, seed sources, and tree populations have been moved to places that are predicted to have suitable climate for that plant to grow in the future. Such places may not always be far[4].

The climate in British Columbia is expected to rise in 3 to 4 degrees Celsius in the next few decades[5]. Therefore, despite the seeds that are planted today are growing in a suitable environment, they will likely face health risks due to climate change in the future. It is estimated that, in general, plants need to migrate 3,000 to 5,000 meters under current climate projections, which far exceeds their observed rates of 500 meters[4]. Moreover, tree species are generally more prone to impacts of climate change compared to short-lived plants because it takes them several generations to adapt to a new climate[4]. Therefor, some populations are experiencing great risks due to the mismatch between climate change and adaptation rate of trees[1][4]. In British Columbia, assisted migration was implemented as one adaptation option to help conserve the biodiversity, health and productivity of forests under climate change[1]. 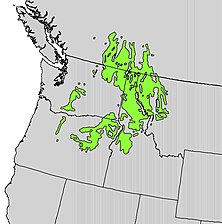 Several Provinces in Canada are changing the guidelines regarding the use of tree seeds. Those changes enable the movement of tree populations either within their range or beyond their natural range[6]. The first policy on assisted migration in Canada has been implemented to migrate Western Larch (Larix occidentalis Nutt) from their natural habitat in southern British Columbia to the northern part of the province[7]. Western larch plantations in northern BC did very well and the populations were thriving and represented an economic incentive for the policy makers. Additionally, non-human actors like Pine beetle infestations and climate change projections paved the way for new guidelines.[8] New seed transfer guidelines have been implemented that allow agreement holders to plant up to 10% of their annual seedlings as Western Larch[7]. By now, British Columbia has extended the seed transfer zones for most of the tree species by 200 m in elevation and two degrees north in latitude[9].

The government of B.C. had initiated a long-term research study called the Assisted Migration Adaptation Trial (AMAT) in order to help forest seed managers better understand the climate tolerances of different species, hence select seed lots best suited for future planting. This research tests 48 seed sources from breeding tree populations in British Columbia. These seeds were placed in 48 test-fields located between southern Yukon and northern California . Starting 2009, each four-year-rotation will require twelve tests to be established. In addition to that, every five years, the growth, health, and wood quality of trees will be measured. The combination of climate and latitude were used to calculate the productivity of each breeding population. The result of these analysis will help develop an assisted migration system that “maximize adaptation of forest plantations, thereby maximizing productivity, forest health and wood quality”[10].

Applying Assisted Migration to Test the Potential of Whitebark Pine

One case study was done on whitebark pine (Pinus albicaulis), a keystone species in western North America. As temperature rises in the next 70 years, it was predicted that this species will be extirpated from most of its current growing areas. However, the same species distribution model predicted that a large area of northwestern British Columbia, Canada, will remain suitable for whitebark pine to habit throughout the 21st century. To test such hypothesis, experimenters collected whitebark pine seeds from seven populations in eight locations spanning from southeast to northwest of the province where this tree species grew originally. At the end of this experiment, they have came to an conclusion that whitebark pine is able to germinate and survive kilometers above its current north limit.  However, further monitoring is required in order to determine the tenacity of these populations[11].

Although assisted migration was addressed as a useful way to mitigate climate change, it’s risks and benefits have raised several debates. The main reason why assisted migration has received its support is because this strategy prevents species extinction, especially species of great importance or with great historical value. However, there are limited experimental evidences available at this time, and this design is mostly based on the support of models. Despite assisted migration was proposed in the 20th century, it received little attention until 2007, when the number of articles on this topic increased dramatically. Assisted migration is controversial because it conflicts with certain conservation practices. For example, comparing the importance between preserving a single species and protecting an ecological community against introduced species. There is concern that while assisted migration relocate species to places that will likely have suitable climate in the future, these translocated species may have similar impact to invasive alien species and pose risks to the resident species, or have uncontrollable growth rates[12][13].

Assisted migration has been recommended in the past as a solution to adapt to climate change[14]. However, with its proposal came much controversy [15]. Current climate projections require trees to reproduce and migrate far above the actual rate they currently are in order to combat climate change [4]. Assisted migration has been proposed to aid in the speed of this process. However, it has been discovered that many other problems can arise from using assisted migration. Moving tree populations in an attempt to match future climates can actually cause a disturbance between host trees and ectomycorrhizal fungal communities[14]. It is also argued that human assistance with tree health may not be necessary as forest ecosystems have been able to re-establish themselves over millennial time spans[4]. Moreover, assisted migration poses many ecological risks such as genetic pollution, hybridization and the introduction of new pathogens and invasive species[4]. However, in a study done by Winder et al., it is stated that assisted migration could be a very feasible option to combat the health of trees against climate change as long as it is done over short distances and risks are minimized. This is further supported in a study done by Williams et al., where it is stated that an increase in distance results in a loss of productivity, decreased fitness and mortality. Furthermore, assisted migration has been shown to prevent species extinction and sustaining ecosystem services and biodiversity [4]. It is hard to come to a clear conclusion on the severity of the ecological impacts assisted migration can cause because there is a lack of research done on the topic. Many research studies are currently taking place in British Columbia in order to develop strategies in order to obtain high productivity from assisted migration. An example of this is a policy implemented here in British Columbia that is allowing the movement of western larch [4].Therefore, although there will always be caution when performing assisted migration, it is concluded that it can contribute to optimal productivity and stability in increasing the conditions of the forest ecosystems in Canada[4].

There is a common belief among the general public that species, including tree species have the ability to evolve and adapt to environmental changes around the nature. It is believed that the tree populations should be able to evolve in response to climate change [16]. However, this is mostly wrong. Forests harvest today have to be re-planted with genetic resources that are suitable for the temperatures predicted for 2030~2060 in order to prevent from unnecessary forfeiture which will occur if the trees are planted on a site where climate predictions are inaccurate for a given time[17]. For the predictions for climatic changes, models have suggested that suitable climatic habitats for locations of current North American biomes will either reach a higher elevation, shift to more northerly latitudes, expand, shrink, or simply disappear[3][18][19]. Specifically, for the shift, it is predicted that it will reach hundreds of kilometers northward by the end of the century[20][21].