The Antillean Manatee is a subspecies of the West Indian Manatee (Trichechus manatus).

The Antillean Manatees (Trichechus manatus manatus) have their largest breeding range on the eastern Central American coast of Belize[1][2]. However, this habitat has been placed under major threats relating to human activities; such as, poaching, entanglement in fishing gear, watercraft collisions, degradation due to development, pollution and unsustainable fishing practices[2] . In addition to human threats, low reproductive rates and environmental impacts contribute to the decrease in population[2]. The Belize manatee is listed as an endangered species under the Belize Wildlife Protection Act of 1981, Part II, Section 3(a) in response to severe population decline felt in 1936[2]. To better understand the Manatee population in Belize, many factors like diet, movement patterns, lifestyle and genetic variation must be taken into account[3][4]. Many efforts have been take towards the conservation and well-being of the manatee population, including regulation on fishing, regulation on boat usage and speed, and the establishment of protected areas [1].

Background on the manatees of Belize

The coastal waters of Belize contains several favourable features for the Antillean manatees, including small islands and rivers.

Manatees are large, fully aquatic, mostly herbivorous marine mammals. There are currently three accepted living species of the manatee: the Amazonian manatee, the West Indian manatee, and the West African manatee. The species' name indicates the regions in which where they inhabit.

Manatees are obligate herbivores, and it can spend up to seven hours a day grazing all sorts of marine and fluvial plant[5].

Manatees in Belize are Antillean manatees (or "Caribbean manatees" by the IUCN[6]), which is a subspecies of the West Indian manatee. It is the largest surviving member of the aquatic mammal order Sirenia. The Antillean manatees can be found in shallow coastal waters through the Caribbean and Gulf of Mexico, and their most important habitat is found along the 386 km-long coast of Belize[7]. This is because they prefer warmer temperatures for that they cannot survive in water below 15 °C, and prolonged exposure to water below 20 °C can cause "cold stress syndrome" and death[8]. Also, since coastal populations of manatee relies heavily on seagrass and other marine plants[9], it is necessary for them to stay in shallow warm waters by the coast. Along with shallow seagrass beds near the shore, Belize also has several lagoons, small islands, and rivers that are suitable for manatee habitat[3][10]. 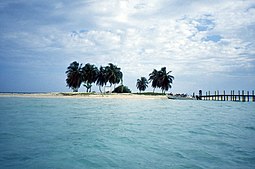 Goff's Caye: one of the small islands off the coast of Belize.

The conservation status of Antillean manatees are listed as endangered since 1981[6].

Main threats to the manatee population

The current manatee population in and around the Belizean waters is estimated to be around 1000[3]. Data from 1991 to 1997 shows a stabilization in population size; however, recent data shows a declining trend correlating to rising human impacts[2]. This includes marine habitat degradation by development, unsustainable fishing practices, increase in ocean fishing nets, and pollution[1][3][4][11][12][13][14]. Boat collisions and fishing gear entanglement are also growing concerns[1][2][3][4][11][13], for manatees prefer coastal areas near the shore where aquatic vegetation is abundant[2][3][4]. One of the key reasons for increased collisions is because of the rising tourism industry; increasing number of tourists are entering Belize by cruising ships and speedboats[2][15][10].

Poaching is another threat to the Belize manatee population[1][4][14], with some cases for the consumption of manatee meat[10][14]. However, rates of manatee hunting may be decreasing due to increasing action by conservation groups[13].

Another issue of concern is the slow growth of the manatee population. On average, one calf is born to a female manatee every two to three years at 7-9 years of age, with several males forming mating herds around an individual female[16]. The low reproductive rate is further hindered by Antillean manatee's patchy population distribution,[17] Despite of the large size of the breeding ground, manatees are highly restricted to coastlines, and individuals rarely travel far distances. Because of this, the entire population of manatees are clustered into different sub-populations[2].

The drilling of offshore oil reserves may also be a threat. Because pollution from these activities are not always accounted for in environmental impact assessments, this could be a heavy concern for marine mammal populations of Belize, including the Antillean manatees. Recent discussions to commence these activities in Belize waters have been countered by heavy uproar, and projects have been challenged by multiple marine protected regions.[12]

A panoramic view of Turneffe Atoll.

Several actions have been taken to address the decline in the manatee population. Belize has signed multiple international conservation commitments to protect the Antillean manatees, including the Convention on Biological Diversity (CBD), the Convention on International Trade in Endangered Species of Wild Fauna and Flora (CITES), and the SPAW Protocol in the Cartagena Convention[14].

Currently, one of the main approaches to conserve the manatees of Belize has been to protect their natural habitat[4][14][19]. The Corozal Bay Wildlife Sanctuary was established in 1998 to create sanctuary boundaries especially for manatees[10]. In addition, the Turneffe Atoll – a Belizean atoll located 50 km from the coast – was established into a marine reserve in 2012 to protect local marine biodiversity[1].

Another approach toward the conservation of the Belize manatees has been to monitor, protect, and rehabilitate them from harmful behaviours. Poaching reduction programs aim to prevent poaching manatees, because poaching is also contributing to the decrease in manatee numbers[15]. Furthermore, collaboration between the National Manatee Working Group of Belize and experts from both Mexico and the U.S. since 1996 has worked on developing research, conservation, and education measures to help discourage manatee poaching[10].

Rescue efforts have also been done to rehabilitate injured, stranded or orphaned individuals and release them back into the wild[13][14][19]. Conservation groups both local and abroad have been conducting aerial, radio, and field surveys to monitor the health of the population[11][13]. An example of a global conservation group is "Frontier": a non-profit organization which has gathered volunteer workers to collect information on the manatees of Belize, such as population, habitat, and behaviour[20].

To increase the population of manatees in Belize, captive breading and rehabilitation of lone manatee calves can supplement local strategies[21]. Supporting the manatee population with a consistent rate of additional calves may help with habitat establishment, and ultimately higher rates of natural reproduction within habitats. However, captive breeding may be subject to some controversy. Excessive contact with human rehabilitators can cause manatees to become attached to humans, increasing their risks of approaching too close to boats and other dangerous, anthropogenic activities[19]. It has also been found that captive manatees can become too passive when released into the wild, lacking the ability to find proper food and shelter as well as assimilate into their wild counterparts. Nevertheless, it has been noted that the amount of time a manatee is kept in captivity is correlated with the individual’s level of habituation towards people[19].

As mentioned above, the Belizean manatee population is widely distributed in small pockets, where different populations are likely to be isolated[17]. This is studied to be one of the reasons why there are low genetic variation in the Belize manatee population[2]. By introducing policies that protect areas of water and diverging marine corridors, it may be possible to see an increase in interrelated activities within fragmented populations[22]. There can be several ways to achieve such policies. For example: a strong state-funded movement and more strict review of economic activities of the sea can potentially be successful. As of now, many smaller conservation organizations are solely funded by donation of patreons, and helps from volunteers[23]. This could potentially be unsustainable due to not having steady financial funding. This also raises the problem of the fragmented, too numerous to mention conservation organizations. Some organizations are sponsored and partners with official boards of the state, while some organizations are less officially sponsored. Though they all work towards the same goal with the same premise of conserving the manatee population, it has the potential to be more efficient if the operation is more centralized[24]. 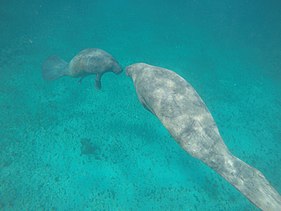 Ultimately, the manatees of Belize are subjected to a decline in population with the combination of human threats[1] and low reproductive rate[16]; however, there is hope as the manatee is being recognized as an endangered species[6]. This recognition has led to many efforts to conserve and protect the Antillean Manatees of Belize[19]. These efforts include a variety of solutions ranging from the implementation of protected areas to rehabilitation projects to monitor the status of manatee well-being[14]. There has also been continuous study on Antillean manatee behaviour in the past few decades. As more information about Antillean manatees are obtained, existing conservation measures can quickly adopt and adapt to better the results.

In particular, protected areas is a large part of manatee conservation, for habitat loss and degradation is one of the leading cause to its population decline. Just like the Corozal Bay Wildlife Sanctuary, the Swallow Caye Wildlife sanctuary was implemented by the government of Belize in 2002[15]. Efforts such as Corozal Bay and Swallow Caye has influenced neighbouring islands and countries to practice conservation through protecting shared species like the manatee[10]. While more research is required for effective manatee conservation[10][19], evidence seems to show that the protection of manatee habitat may be the most sustainable and effective solution in the long term[3][4][19].