Whether they are called western honeybees or European honeybees, Apis mellifera are no doubt one of the most important insect species important socially, economically, and environmentally. Among many species that pollinate, western honeybees provide the most service to humans. Not only do these bees pollinate our crops and other wildflowers, but also impact landscape aesthetics and other indirect services. The western-honey bee has had declines in population ever since the early 1900's and has continued to deteriorate. 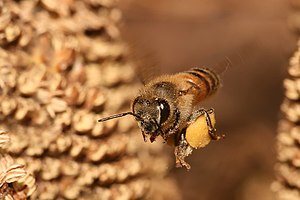 Western honeybee (Apis mellifera) is a key pollinator for agriculture in the United States as it is reported to be the bee species that pollinates the greatest variety of the crop species (Breeze et al., 2014). Therefore, a continuous decline in recent years in the western honeybee population in North America is especially alerting. This wiki page will not only highlight the importance of the western honeybee but also introduce the impact of western honeybee’s population decline to our economy, environment and society. Furthermore, this page introduces several potential causes such as a parasitic mite, Nosema apis (Williams et al., 2009) that lead to the decline as well as some of the responses.

Being one of a few widely used honeybee around the world for agriculture, the western honeybee is an essential piece for enhancing agriculture productivity (Potts et al., 2010). The recent bee colonies decline has affected the honey industry especially the beekeepers (Pettis & Delapane, 2010). A symptom that contributes to a large number loss of mature bee with no dead bees around the hives which is being called Colony Collapse Disorder (CCD) has an enormous impact on the beekeeper community in the USA (Pettis & Delapane, 2010). Due to the tremendous yearly loss of the managed bee colonies ranged from 30%-60% over the winters continuously in the past decade, beekeepers are not able to keep up with the decline as the livelihood of the beekeeper community is threaten (Ellis et al., 2010).

As the whole bee industry declines in population, the supporting service that revolves around it also experience a negative impact. Transporting bee hives has become more common in recent years to satisfy the need of farmers that grow mainly pollinator-dependent crops such as canola (CanolaSthAB2009). Followed by the decline of honeybee population across north America, trucks that transport bee hives become an even less favorable job than before. Not to mention such service has already been suffering from low recruitment rate (CanolaSthAB2009).

Response to Ameliorate the Decline of Western honeybees

Consecutive years of increasing Western honey bee mortality has been observed in the United States, Additional funding and researches were mandated by the US Congress. Such effort was aimed to find out the contributors of the honey bee decline (Jeffery & Keith, 2010). Many suspected trans-global pathogen and parasites were believed to be one of many main contributors to the decline (Ellis & Munn, 2005). When analyzing the spread of diseases and pests that were related to the decline of honey bee population (not restricted to only western honey bee), it was concluded that the surveyed disease/pest distribution was more likely to be restricted by their geographic elements and climates, rather than human efforts to mitigate the spread. However, the survey was conducted on a country-level, its finding lacks result from within the country. Therefore, the finding becomes less helpful in terms of dealing with the western honey bee population decline (Ellis & Munn, 2005). Further into the discussion, roughly 40 industry leaders and scientists in the United States attempted to come up with a solution in response to the western honey bee decline. However, no definitive conclusion was drawn from the meeting (Jeffery & Keith, 2010).

In response to the rapidly declining western honeybee population, US Department of Agriculture (USDA) initiated an area-wide project administrated by Agricultural Research Service (ARS) and Coordinated Agricultural Project (CAP). Such project initiation was aimed to improve honeybee’s physical condition (Jeffery & Keith, 2010). Several demonstrative trials were set up across the states, findings were pooled and analyzed by ARS aiming to discover natural resistant bee population to mites and disease (Jeffery & Keith, 2010). Additionally, structural development needs to be implemented alongside with experimental results. National Institute for Food and Agriculture (NIFA) were keen to create a bridge that would improve the communication between new research result and beekeepers who were the affected stakeholder of the declining honey bee population. CAP’s project was set to be multi-state, multi-year and also integrated to educate affected stakeholders like bee farmers, such design allowed CAP to determinate the interactive effects of disease agents and environmental change on honeybee’s population, and quickly deliver findings to clients group (bee farmers) to speed up the process of recovering honey bee population.

Importance of Other Wild Pollinators

A rationalized and comparative evaluation of options from technical, social, cultural, economic, financial, political, legal points of view (not all of these categories will be relevant to all situations)

You should conclude your Wiki paper by summarizing the topic, or some aspect of the topic, as if possible, state a policy recommendation.

Please use the Wikipedia reference style (see Wikipedia:Inline citation). Provide a citation for every sentence, statement, thought, or bit of data not your own, giving the author, year, AND page (when using direct quotes). For dictionary references for English-language terms, I strongly recommend you use the Oxford English Dictionary. You can reference foreign-language sources but please also provide translations into English.

Note: Before writing your wiki article on the UBC Wiki, it may be helpful to review the tips in Wikipedia: Writing better articles.[1] (Note that - if you look on the edit screen for this page when you are logged in - you will also see this as an example of how to create a reference!)