Capacitance is a very important subject to understand with regards to electrical equipment. The symbol used to represent a capacitor in an electrical circuit schematic is shown in the image above. This symbol is supposed to depict a parallel plate capacitor like the ones in the image below. As you can see the symbol is a fairly good illustration of the real apparatus. It is helpful to remember what an actual parallel plate capacitor looks like during exams when you need to interpret and manipulate an electrical schematic. This capacitor shown above is literally two plates, separated by space or an insulator, that are connected to an electrical circuit. Each plate connects to the circuit at a different potential. One of the plates stores positive charge while the other stores negative charge. 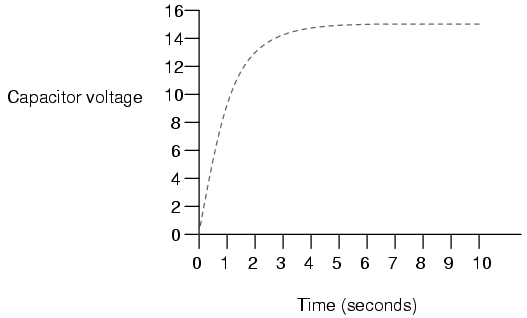 When a capacitor is connected to a circuit or a voltage is applied to the capacitor the voltage measured across the plates is zero. This is because both plates have the same amount of charge (initially) and therefore there is no driving force for charge to be attracted to one plate over the other. Remember that 1 Volt = 1 Joule / 1 Coulomb. Therefore it would take 1 Joule of energy to move 1 Coulomb of charge from 1 Volt to 2 Volts or 6.23 Volts to 7.23 Volts. As time passes the plates will attain the same voltage as the applied voltage.

As well as voltage the current in the circuit can be determined from this plot too. The current is going to be the derivative of the voltage across the capacitor times the capacitance. The plot shows that initially the current will be very high and eventually it will drop to zero.

Keep in mind that the capacitor actually is a physical separation in the circuit. Current does not flow across the plates of the capacitor although it seems like does. The capacitor plates will interact with one another but they do not actually exchange charge. Because the plates are close to one another they will feel the effects of one another's electric fields. If one plate has a high positive charge it is going to cause the electrons in the opposite plate to move towards the surface closest to the positive plate. This is the principle behind how a capacitor works.

Other key things to keep in mind are that once unhooked from a battery, capacitors in series or parallel will continue to hold charge and this charge should be conserved. In addition, since capacitors essentially store charge, charge must run through the wires to get to each plate. Although current does not physically run from one plate to another, at t=0 when charging a capacitor, it almost appears to act as a wire. Once fully charged, the capacitor will not allow any more charge to build up on either plate and it will appear as though no current can pass through.