Racism and Persecution against Uyghur Muslims in China 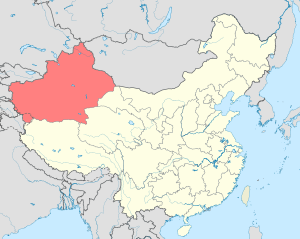 The region in red indicates Xinjiang.

The Uyghurs are a Turkic-speaking ethnic group that resides in the Xinjiang Autonomous Region in North-West China.[1] During the second half of the 20th century, the Chinese government implemented policies to suppress the cultural identity and religion of Uyghur Muslims by allowing for a mass migration of Han Chinese people to Xinjiang.[2] In recent years, the Chinese government began to detain Uyghurs and place them in "vocational training centres" to suppress them from their religion and culture by undergoing "psychological indoctrination programs" and studying communist propaganda, while separating them from their families.[3][4]

Uyghur Muslims in the Xinjiang Province

Before the People's Republic of China annexed and colonized Xinjiang in 1949, the total population of Uyghurs was approximately 76% in the region.[5] On the other hand, the Han Chinese, China's majority ethnic group, represented 6.2% of the region's population.[5] However, with the ongoing annexation and colonization of the region after 1949, Han migration increased to 40% of the Xinjiang population and diluted the ethnic ratio.[5] The main goal of Beijing and the PRC was integrate Xinjiang with China by achieving political, cultural, geographical and economic control over the territory and the minority ethnic groups, including the Uyghurs.[6]

Many ethnic minorities in Xinjiang, including the Uyghurs, refused to succumb to the Chinese Communist Party and speak Mandarin, while others resisted Beijing's rule and campaigned for independence.[5] The Chinese Communist Party considered criticism and resistance as a threat to state security.[5] Additionally, during the Great Leap Froward, Beijing considered religion and ethnicity as "obstacles to progress" and claimed that the Uyghurs were "backwards".[5]

On April 1, 2017, the Chinese government set new policies and regulations prohibiting Uyghur Muslims from adhering to their religious and cultural customs and traditions.[7] China claims that the implemented policies are aimed to avoid religious extremism and Islamist terrorism.[7] The sinicization of Uyghur Muslims through China's policies violate human rights and freedoms and are aimed to dilute the Uyghur culture and threaten their ethno-religious identity.[8]

The legislation passed on April 1 prohibits the “abnormal growing of beards" and naming of children to "exaggerate religious fervour,” such as Mohammed and Fatima.[7] Furthermore, the government encourages workers in public spaces, including airports and public transportation, to disallow people who choose to wear fully cover their bodies and wear veils from entering the space by reporting them to the police.[7] The document also bans the refusal to watch and listen to state television, radio and other public services, as well as prohibits families from putting their children in religious or cultural schools by forcing them into state-run schools.[7] Other policies include the ban of marrying using religious instead of legal procedures, deliberate damaging of legal papers and documents, and “using the name of Halal to meddle in the secular life of others”.[7]

According to the United Nations, over 1 million Uyghur Muslims are detained and placed in re-education camps. [9][3] According to the Chinese government, they claim that these camps are "reeducation centres" focused on enriching the experiences of Uyghurs.[3] China states that the camps are for vocational training aimed to "combat extremism", and that they are educating detainees "useful and valuable skills".[3] However, Agence France-Presse debunked this narrative after they published a report in October 2018, exposing the brutal reality of these concentration camps.[3] AFP journalists illustrated in this report that thousands of camp guards regularly carry around weapons, such as guns, tear gas, and spiked clubs to surveil and threaten the Uyghur detainees.[3] Moreover, the detainees are often forcibly placed in buildings filled with infrared cameras and blocked by razor wires.[3] The report also reviewed public documents that contained information on equipment purchased by government agencies.[3] These purchases included 550 electric cattle prods, 1,367 pairs of handcuffs, 2,768 police batons, as well as 2,792 cans of pepper spray.[3]

Kayrat Samarkand was an Uyghur Muslim detained by the police and sent to a "reeducation camp" for 3 months in Xinjiang.[10] In an interview, Samarkand stated that he was continuously humiliated and brainwashed with endless hours of communist propaganda and chanting slogans praising the President Xi Jinping.[10]

“Those who disobeyed the rules, refused to be on duty, engaged in fights or were late for studies were placed in handcuffs and ankle cuffs for up to 12 hours. Further disobedience would result in waterboarding or long periods strapped in agony in a metal contraption known as a 'tiger chair'."[10] - Kayrat Samarkand

By detaining men and women into concentration camps, thousands of children are left and forcibly displaced in "boarding schools," which are realistically detention centres and orphanages.[3] By the end of 2019, over 500,000 children aged 8 and up were taken from their families and placed in state-run orphanages by authorities to "erase their Muslim values and beliefs".[11] Despite this, the Chinese Communist Party (CCP) justifies the displacement by arguing that these are "boarding schools" that serve as a way to fight poverty and to improve Uyghur children's access to education.[11]

China transformed the region of Xinjiang into a surveillance state as they consider the Uyghur ethnic group to be a terrorist collective.[5] Beijing uses many different forms of surveillance upon Uyghur Muslims for control. For instance, there are cases where the state appoints Uyghurs to spy on others and to report illegal behaviour that is against the government's policies.[5] Suspicious and illegal behaviour includes the refusal to watch state news, to drink alcohol, and to smoke.[5]

Other surveillance technologies are implemented to control measures of the Uyghur population by using iris scanners, 3D identification imagery, as well as face and voice recognition of Uyghurs to control and keep track of their movements.[5][3]

Additionally, the government of China keeps track of Uyghurs by allowing the police to confiscate phones and download their information them to use, as well as confiscating passports to prevent Uyghurs from travelling.[3]

In addition to being a signatory to a letter for the United Nations, the Uyghur Human Rights Policy Act, a federal law that requires US government bodies to report human rights violations caused by Communist China against the Uyghurs, was passed by the US.[12]

18 European countries, including Britain, France, and Germany, co-signed a letter to the United Nations High Commissioner for Human Rights, condemning China's violation of human rights and detainment of Uyghurs in the Xinjiang region.[4] This letter expresses concern about "credible reports of arbitrary detention ... as well as widespread surveillance and restrictions, particularly targeting Uyghurs and other minorities in Xinjiang."[4] Furthermore, Germany called out China expressing its concern towards the Uyghurs and called for an immediate stop of the detainment and human rights violations.[13]

According to the Human Rights Watch, 22 countries were issued a joint statement to the United nations to call for China to end the violence against Uyghurs.[4] According to John Fisher, Geneva director at Human Rights, "the joint statement is important not only for Xinjiang's population, but for people around the world who depend on the UN's leading rights body to hold even the most powerful countries to account."[4]

The United Nations called on China to: