Our networked society is closely intertwined with the advent of new media (van Djik, 1997). Jan van Djik, who played a key role along with Manuel Castells in laying the theoretical foundations of the network society during the 1990's, states that networks can be observed in all areas and levels of society ("Network_society", 2011; van Djik, 2005). Additionally, van Djik (2005) describes how these networks are characterized by the convergence of traditional and new forms of media, as interpersonal, organizational, and mass communication are linked together. These recent and profound transformations to society directly impact education. Facer and Sandford (2010) discuss their research, in which they predict the socio-technological changes that may occur over the next generation. Their conclusions reflect the concerns of other researchers and theorists in the field of educational technology, that in light of new media and the increasingly pervasive nature of our networked society, significant reform in pedagogy and practice is required to adjust to the changing educational needs of students (Facer & Sandford, 2010; Hughes & Gadanidis, 2010; Leander et al., 2010; Partti & Karlsen, 2010).

What is a Network Society? 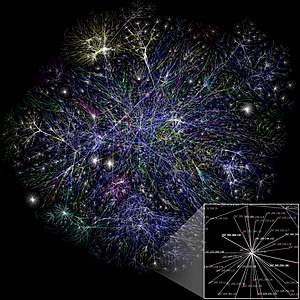 A Visualization of the various routes through a portion of the Internet.

van Djik (2005) uses the metaphor of the human nervous system to illustrate the concept of a network society. He further defines this term as "the combination of social and media networks, produced both by organizational and technological innovation, that forms the basis of the articulating and pervading network structures of modern societies" (van Djik, 2005, p. 1).

The structure of the network society is created and influenced by technological innovation through information and communication technologies, globalization, and a new economic condition resulting from our ability to access and distribute information worldwide (Castells, 2004; Stalder, 1998). The Network Society developed at a time when society moved from the industrial age to the information age. According to Castells (2004), power in a network society is embedded in technology which results in a new paradigm called Informationalism, which subsumes industrialism and constitutes the material basis of society.

Hubs and nodes are terms that are used to describe virtual spaces within a network society. Hubs link the network to precise conditions to produce strategic network functions whereas nodes are locations that use the key functions of the network to make decisions and construct groups and activities (Castells as cited in Stalder, 1998).

2. Communication is not dependent upon time or space because nodes are mobile and move around the network (Castells, 2004; Glass, 2005; Stalder, 1998). van Djik (1999) disputes Castells' notion that time and place are irrelevant explaining that online groups are being more strategic in terms of locating their nodes and new media affords selectivity in choosing whether to meet in synchronous or asynchronous time. Stalder (1998) also argues that Castells' theory is vague in this area and presents the concept of binary time and space. Binary time refers to the state of being either present or absent and binary space refers to being either in a network location or outside the location (Stalder, 1998).

3. Exclusive, interconnected spaces that provide a base for an elitist group of people who command the overall network (Castells as cited in Stalder, 1998). van Djik (2005) explains further that although much of the network society is decentralized, there are central powers. Power embedded in networks spreads out and coordinates horizontally, while maintaining vertical control over activities (van Djik, 2005).

Moreover, the network society is characterized by individualization, a mobile lifestyle, and geographically dispersed connections (van Djik, 2005). Thus, decentralization occurs due to communication technologies that afford rapid and asynchronous communication (Glass, 2005). Furthermore, a reversal in values is an attribute of the network society, its interactivity, and its decentralization (van Djik, 2005). van Djik (2005) notes a hierarchical shift away from top-down demands such as governments considering the citizen perspective and educators adopting practices of student-led learning.

What is New Media?

There are numerous similar terms to describe the various forms of media that have emerged within the network society. New Media is an umbrella term that encompasses cultural objects and paradigms ("New_media", 2011). The terms Digital Media, Social Media, Cyberculture, and Web 2.0 all describe aspects of new media based on the following explanation of its defining characteristics.

New media is digital and dynamic, affording on-demand access, digital interactivity, user participation, community, real-time production and editing of content (generally by more than one person), and user-generated media ("New_media", 2011). Additionally, new media enables the use of multimedia platforms (van Djik, 2005). In contrast, traditional or old media consists of objects and frameworks that are analog and/or do not enable interactivity such as television, books, and other paper-based publications ("New_Media, 2011).

Effects of New Media on Society

"All the problems of traditional media return in these new media: the relationship between public issues and commercial interests; the problem of reaching a large audience and getting its participation; questions of pricing, freedom, and control in communication, access, privacy, information rights, property rights, etc." (Van Djik, 1997, p. 60-61)

As expressed by Gillmor (2008), deception and the reliability of information are concerns with new media. In the early days of social media marketing, buzz marketing strategies were used where bloggers received monetary compensation, directly or indirectly, to promote large corporate entities without disclosing their relationship with the corporation to their audience (Gillmor, 2008). As a result, in 2009, the United States Federal Trade Commission published guidelines to govern word-of-mouth endorsements. Ostrow (2009) writes on the popular social media website Mashable that failure to comply with these new rules could result in bloggers receiving significant monetary fines. van Djik (2005) asserts that citizens within the online community are needed to act as watchdogs for bias and untrustworthy information.

On a more personal level, loss of identity and traditional face-to-face community are challenges that are arising in the network society (Stalder, 1998; van Djik, 1997; van Djik, 2005). According to van Djik (1997) the fragmentation of traditional communities is particularly noteworthy in Western cultures where widespread network access prevails. Artificial environments can be formed and afford societies that extend across time and space, both synchronously and asynchronously (van Djik, 1997). Virtual communities based on common interests, goals, and affinities are created in these environments and provoke a redefinition of identity for individuals and social groups (Castells as cited in Stalder, 1998). In virtual settings, people can choose only to reveal certain facets of their personality and, as a result, less people have an understanding of them as a whole person (van Djik, 2005).

Despite these obstacles, the global village as a whole is becoming closer knit as international accessibility to others and their work increases (Gillmor, 2008; van Djik, 2005). Through Castells' (as cited in Stalder, 1998) concept of space of flows, groups can now work collaboratively in real-time, regardless of individual geographical barriers. By means of new media, people are able to leave their personal comfort zones and explore different worldviews, which they may not be exposed to otherwise (Gillmor, 2008). Capitalist enterprises may still attempt to impose their agendas on individuals and communities; however, those with opinions that oppose the propaganda of public mass media now have opportunities to share their viewpoints in an open venue helping others to look at a situation with a new objectivity (Gillmor, 2008; van Djik, 2005).

Impact of the Network Society and New Media on Education

Part of digital citizenship is familiarity with the unspoken rules for governance online, such as netiquette (Gillmor, 2008). Developing media literacy to discern the meaning and credibility for different representations of information is critical to functioning successfully in the network society (Gillmor, 2008; Ito, 2008; Ohler, 2009; Yildez, 2002).

There is a performative nature to learning through new media whereby students submit their projects and ideas publicly, opening the door for evaluation by peers and others who share common interests (Hughes & Gadanidis, 2010; Partti & Karlsen, 2010). In the past, the teacher was the main audience for a student's work; however, formal and informal communities of practice allow for situated learning to occur (Hughes & Gadanidis, 2010; Lave & Wenger as cited in Leander et al, 2010).

There is a call among researchers for a paradigm change within the realm of education (Facer & Sandford, 2010; Partti & Karlsen, 2010). New media and the network society afford novel modes for communication and non-linear representations of information (Hughes & Gadanidis, 2010). Partti and Karlsen (2010) assert that teachers must be knowledgeable of the learning that takes place within the framework of new media so they are able to equip and support students in connecting informal learning experiences to their in-school experiences.

Ito, M. (2008). Participatory learning in a networked society: lessons from the digital youth project[Lecture notes from the 2008 Annual meeting of the American educational research association presidential session]. Retrieved from http://www.itofisher.com/mito/publications/participatory_l.html

Stalder, F. (1998). The network paradigm: Social formations in the age of information. Retrieved from http://felix.openflows.com/html/netparadigm.html

van Dijk, J. (2005). Outline of a multilevel approach of the network society. Retrieved from http://www.utwente.nl/gw/vandijk/research/network_theory/network_theory_plaatje/a_theory_outline_outline_of_a.doc/