MET:Gesture Based Computing in Education

Gesture based computing uses hand, eye, face and body movements often in combination with voice to control different applications. It offers a more natural form of human computer interaction (HCI). Input devices range from gloves or cameras to touch screens and controllers such as the Wiimote.

Examples of Gesture Based Technology Systems

Although gesture based computing is best known for its use in gaming applications the potential use in education is just starting to be explored.

Current Uses of Gesture Based Technology

Gesture recognition technologies are already in use to aid people with visual impairments and physical disabilities. Motion tracking provides a range of solutions for physical therapy and rehabilitation. Kinetic has been used with stroke and brain injury patients at the Royal Berkshire Hospital for rehabilitation activities.[2] Teaching tools for children with acquired brain injuries make use of gesture recognition using cameras without using gloves or using controllers. As learning can occur at a slow rate after a brain injury, many trials may be necessary to acquire a new skill or information. Gesture recognition software provides the opportunity for repetitive practice in a play-and-learn environment that works to decrease boredom and frustration. Gesture based computing allows for natural interaction with devices promoting children with brain injuries to overcome their disabilities. [5]

File:Facial Recognition.jpeg
Gesture based technology can be used in novel ways to recognize and interpret facial expressions.[6]

Gestures are used to control interactions within video games to create a more interactive and immersive experience.

Gesture recognition technology can be used in the process of identifying emotional expression. Researchers at MIT are using gesture based technology to provide an ‘emotional hearing aid’ to help people with autism interpret facial expressions.[7] Kinect has been used at Lakeside Center for Autism to help children overcoming various difficulties regarding physical and social development.[2] 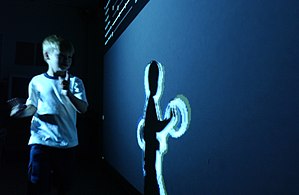 With the commercial success of systems like Nintendo Wii and Microsoft Kinetic, attention has been drawn to the potential of using gesture-based technology in the classroom. [9] It can be used as a tool for learning and interaction among users.[2] Kinect is now an open source product which unlocks innovation for educational purposes.[9] KinectEDucation, a community of educators involved in developing resources for the classroom, unconnected to Microsoft, is an example of such innovation.

Can action support cognition? Can direct touch support performance? These are questions posed by Ayelet Segal. Her research focused on whether gestures affect thought. She looked at whether or not the physical manipulation of objects could benefit cognition and learning, improving performance in areas such as arithmetic. Students using a gestural interface, manipulating objects directly rather than with a mouse, showed higher performance in her study. [10]

Gesture based technology will enable users to interact with ideas, share and collaborate in new ways. Potential applications for education include:

G-Speak from Oblong Industries used gestural technology to involve visitors at the Sundance Film Festival in an interactive film project. Their TAMPER installation enabled participants to take elements from a number of different films and create something unique. [11] Similar participatory projects could be employed in a variety of educational settings.

Researchers in Sweden have created a virtual autopsy using a multi-touch table that allows the manipulation of CT scans with gestures [12] Gestural interfaces can allow users to easily perform precise manipulations that can be difficult with a mouse.[11] The affordances provided by gestural interfaces make precision training easier to replicate and cost effective.

Use of gesture based games like Dance Revolution (DDR),when trialed in a school environment, have shown to increase physical fitness and motivation to participate in physical activities.[13]

Gesture based technology can be used to explore the solar system or the digestive system in science classes. Kinect Math can be used in math education to provide a hands-on representation of concepts.

File:Eye music.jpeg
Gestural interfaces can be used in music education, as seen here in Eye Music [14]

The EyeMusic project at the University of Oregon uses eye-tracking sensors to compose multimedia productions based on the movements of the user’s eyes.[11]

Gesture based technology can provide support for students with hearing or visual impairments or physical disabilities by providing alternatives to mouse and keyboard input. As mentioned previously, students with autism spectrum disorders are using applications such as MIT's 'emotional hearing aid'. [7]

Gestural recognition applications may be more accessible to diverse populations of learners. Aspects of gestural language are universal and not specific to any spoken language.[9] The use of natural human movements removes barriers for learners of all ages from two year-olds to ninety year-olds. Decreasing the reliance on the mouse and keyboard has the potential to increase accessibility.[12] Gesture based technology used in web browsing shortcuts has shown to increase navigation efficiency and user enthusiasm.[15] Gestural recognition has utility for users with different impairments and disabilities. For example, a user with a hearing impairment may prefer touch, gesture or pen input. [16]. Devices such as Kinect may also provide greater lab experience accessibilty for students and schools with limited lab equipment and also improve on existing virtual labs by adding a gestural component.[17]

Multimodal interfaces process two or more inputs in combination, for example speech with body movements. They are more flexible than keyboard and mouse interfaces which may allow people with a wide range of communication styles to communicate more effectively. These interfaces are preferred by many users and are potentially easier to learn. [16]

Using a multimodal system that includes gesture recognition can empower users and give them a “voice” when interacting with technology.[16]

File:Doll Talk.jpeg
Doll Talk, an example of the interactivity and immersion experience offered from gesture based technology [18]

Gesture recognition technology can immerse users in a variety of interactivities. For example, Kinect Math involves the physical manipulation of objects such as graphs with gestures. This provides learners with a physical and visual connection to the content. Another example is Dolltalk, a project by researchers from the Tangible Media Group. This project immerses learners in storytelling through gestures and narrative. By using a variety of sensors (both gestural and audio) the system collects, analyzes information from users to interpret their narrative. If a picture is worth a 1000 words, is a gesture based experience worth a 1000 pictures? Some believe that this may be the case.[19]. Supporters of using Kinect in education suggest that the active component of learning provided by these devices will increase the academic and social performance of students. [17]

Another benefit of this technology is its ability to provide immediate feedback that shapes the learning process. An example of this is found in the success of gesture based technology sign language games for deaf children. If the computer system does not understand the gestural input from the children, they refine their signing until it is correct. Furthermore, children were willing to make multiple attempts and were enthusiastic about using the game.[3]

Gestural based technology can aid the collaborative process and encourage group interactions. [12] Systems, such as Kinect, may increase classroom participation and create positive interactions and opportunities for discussion.[2]Researchers are exploring the role of cooperative gestures, multi-user gestural interactions, to increase the sense of teamwork, encourage equity of participation, playfulness, learning and collaborative creativity.[20] [21]

Integration of Gesture Based Technology

To successfully integrate gestural technology in the classroom a number of usability challenges and design considerations exist. One of the biggest considerations is the evolution of a new vocabulary involving body motions.[9]Currently, there are many different platforms for gestural based technology and although movement is usually quite intuitive, no standard gestural language exists.[22]

Although gestural technology is advancing at a rapid pace, systems like Kinect, which are financially accessible to classrooms, generally work well but may have difficulty recognizing high speed hand signals and input from multiple users at the same time.[9]

Many applications of gestural based technology are game based. A paradigm shift may also be needed for educators to further accept games as learning tools or to see the utility of using gaming devices such as Kinetic solely as input devices. [23] This may involve professional development for educators to develop skills to evaluate games for their creative and active learning outcomes.[2]

Another consideration is the assumption that when using a multimodal system, for example on that can use both gestural and audio input, users will interact multimodally.[16] Design will need to consider the full potential of multimodal systems that involve gestural technology and ensure that users understand the affordances available to interact in a multimodal manner.

Of concern for most educational institutions is cost. Although gesture based technology may seem out of reach to the everyday user, there are many cost effective options. For example, Leap Motion offers a sensor that tracks simple hand and finger gestures for $70.[25] Microsoft also offers Kinect for around the same price point. [26] Integrating this technology into an educational environment is a one-time purchase and many more applications are being developed from the open source community [19]

Commonly used input technologies, such as the keyboard and mouse, can cause major bottlenecks in performing tasks, but things like hand gesture recognition may ameliorate this problem and allow humans to interface with machines more naturally. Considering the relative infancy of research related to vision based gesture recognition remarkable progress has been made. [27]

Many agree that gestural technology is still in its infancy and the full force of its potential has yet to be felt.[19] Technology such as eye tracking devices may become commonplace, eye movements could be used to open an email or open an application on the desktop by all users. [28] Furthermore, there is the suggestion that the keyboard and mouse may one day disappear altogether. [29]

As the evolution of gesture based technology occurs, and occurs quickly, users have some opportunity to prepare. Several contests are in place to find the best applications for gesture based learning tools. Gesture based content is developing across many disciplines and driving innovation. [9]. Kinect user groups also recognize the need for more applications, be it user generated or commercial, in order for successful adoption in educational contexts. [23]

In order for gesture based computing to become a full educational reality innovation will need to involve interdisciplinary collaboration as new ways of teaching, learning and communicating are explored.[12] The ability of multimodal interfaces to model and interpret human movement and language is improving and will continue to evolve. This presents new opportunities for creating and interacting.[16]

Note: During the process of researching this page, it was difficult to find peer reviewed material related to the use of gesture based technology in the classroom. Much of the information available was from educator’s informal experiences with systems such as Kinect. I believe that this page will evolve considerably in further iterations as the technology becomes more commonplace and accessible.