Note: The intention of this page is not to present the Indigenous communities as a singular nation as a whole without diversity throughout Canada. Rather, the purpose of this work is to inform and bring awareness for the need of support for different Indigenous language revitalization programs by focusing on the revitalization efforts and challenges of the Mohawk/Kanien'kehá:ka nation in Canada as an specific example.

According to the 2016 Census, there are over 70 Indigenous languages in Canada, and many of them are labelled to be either endangered or extinct. [4][5] From 1996-2011, the number of speakers with an Indigenous language as their mother tongue declined from 29% to 14.5%.[6] However, the number of second language learners has rapidly increased.[7] Language is an integral and fundamental part of Indigenous identity- even for those who do not speak the language.[8] Since it is deeply embedded within Indigenous culture, many Indigenous leaders express the difficulty of culture survival without it.[9] Language revitalization is a complex issue that is involved with political and cultural identity "that extend beyond the immediate task of generating more speakers."[3]

"[Language] is not only a means of communication, but a link which connects people with their past and grounds their social, emotional and spiritual vitality. Although loss of language doesn't necessarily lead to the death of a culture, it can severely handicap transmission of that culture." [10]

The Mohawk/Kanien'kehá:ka (which means "People of the Flint Nation") nation is one of The Six Nations from the Iroquois. In the 2016 census, about 2,350 people reported speaking Mohawk, however, only 1,295 people reported speaking Mohawk as their mother tongue.[5][11] Studies emphasize how the growing amount of second language speakers does contribute to language revitalization but "is still not equivalent to learning a language as a mother tongue." [12][13]

“Language is our unique relationship to the Creator, our attitudes, beliefs, values, and fundamental notions of what is truth. Our languages are the cornerstone of who we are as a People.” [14]

Indigenous language revitalization processes look different for each region and language. However, they all value the connection between language and culture and how it shapes Indigenous identity.[15] Many Indigenous communities are in need for a stable immersion program for the "lost generation" [16] - people in their 20s, 30s, and early 40s who did not have the opportunity to learn or be in an ancestral language speaking environment. The Kanien'keha/Mohawk nation are a good example as they have a solid elementary teaching program and an adult immersion program.[8]

"If we lose our language, we lose who we are. [...]There is no reason what so ever why our people in our communities can't be [multi]lingual"— said by an instructor of Mohawk immersion programs [17] 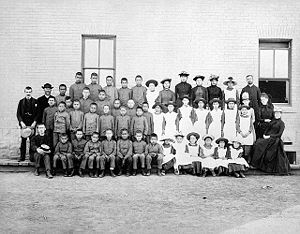 Since the beginning of the colonization of Canada, Indigenous people are challenged to maintain their languages. To this day, there have been many attempts to assimilate the Indigenous people into the western settler-colonial society which is an act of cultural genocide. Such include the Residential School System, the Sixties Scoop, and even the Foster Care System. All these systems are legislated by the Canadian government but lack sufficient funding.[12] These systems contribute to the ongoing effects of colonization by separating younger generations from their families, communities, and contact with the older generation. This cultural assimilation makes it increasingly difficult for ancestral Indigenous languages to be passed down and maintained throughout generations.[19] From 1830 -1970, the Mohawk Institute Residential School was the first residential school established in Canada and the Kanien'kehá: ka/Mohawk nation wanted to preserve these buildings rather than demolish them as they are an important part of Indigenous and Canadian history even though it is a painful one.[20] Cultural assimilation efforts like these were a difficult part of Indigenous history but lead to the consequences of language endangerment today.

Along the journey of Truth and Reconciliation, the federal government must also acknowledge that Indigenous rights include language rights, as they are just as important.[21] There are a multitude of contextual barriers that challenge Indigenous communities like the Kanien'kehá:ka/Mohawk nation in their revitalization efforts. Such include the lack of teachers and resources, declining rate of fluent speakers, lack of access to language speaking environments, and the generation divide.[8][13][22] It varies by nation and location, but most Indigenous communities do not have access or available resources, such as funding or language speaking teachers, to start and maintain language learning programs.[22] The lack of teachers is affected by the lack of traditional language speakers and new language learners as the rate of fluent speaking elders that are passing away increases faster than the rate of younger language learners.[22] For example, the Haida language in Haida Gwaii has less than a dozen fluent speakers left.[23] If all the fluent speakers pass away without transmitting their knowledge with the younger generations, the language will be more difficult to teach/ maintain. The connection and communication between generations are crucial as it not only continues the ability to speak an Indigenous community's ancestral language but also the teachings, rituals, experienced knowledge from the elders that teach the upcoming descendants how to maintain their culture.

According to the United Nations Declaration on the Rights of Indigenous Peoples, Indigenous people not only have the right to revitalize their language (Article 13.1) [28] but also have the right to establish and control their educational systems and institutions providing education in their own languages, in a manner appropriate to their cultural methods of teaching and learning (Article 14.1).[28] With this, different Indigenous communities across Canada have taken the initiative to generate language learning programs and modern methods of intergenerational teaching to help maintain the languages. Young Indigenous learners are recognizing the importance of maintaining their culture through their language and are encouraging future generations to continue this learning.[29]

The contextual barriers indeed make language revitalization difficult for different Indigenous communities but cannot stop Indigenous people from finding ways to practice and communicate their traditional languages within communities, homes, and within their environment.[13][30] Studies found that more exposure to Indigenous languages assists with learning and maintaining. [13] One method is integrating language learning into the school curriculum through either immersion schools, bilingual programs, or second language courses. [24][8][16] The Kanien’keha speaking Mohawk nation, demonstrates a powerful revitalization effort as they have well-established immersion programs for all ages with the Kanien’keha immersion program in elementary and grade school and the Kanien’keha Ratiwennahní:rats Adult Immersion Program for older students.

The growing awareness of the importance of Indigenous language revitalization allows more opportunities for language revival. In 2016, the United Nations General Assembly adopted a resolution proclaiming 2019 as the International Year of Indigenous Languages. [31] The United Nations Educational, Scientific and Cultural Organization's (UNESCO) proposed that this would "rais[e] awareness of a topic of global interest and mobiliz[e] different players for coordinated action around the world".[31] In honour of this, revitalization efforts like the radio series Celebrate Speakers, which was launched by Kahnawake's Language and Culture Network on the Kahnawake reserve's local radio station, are growing across Canada. [32]