Vampire literature first began to appear in the eighteenth century with gender playing a major part in most stories. A gender role, also known as a sex role, is a social role encompassing a range of behaviors and attitudes that are generally considered acceptable, appropriate, or desirable for a person based on that person's biological or perceived sex.[1][1] Masculinity and femininity are included in discussion as issues under gender in Vampire narratives. Vampirism in its literary form was seen as a representation of the Victorian ideas and fears of gender. It was believed during the Victorian era the male meant to be forceful.[2] [2]He is “the protector, the doer, the giver, the defender.” [3][3] Victorian women were to be intelligent and deceiving, however, submissive, naive and pure or virgin at the same time. Demonstration of female sexuality also arose accusations of witchcraft, homoeroticism during the era.

Victorian culture literary vampirism is majorly based on gender destabilization, homosexuality and feminine sexuality. Power and domination of one gender role over another outcasts a state of impotence for the submissive gender, usually women in this case. Such examples can be seen in Bram Stoker’s Dracula, Marion Crawford’s For the Blood is the life and Carmilla by J. Sheridan LeFanu.

Behind the guise of vampirism, Bram Stoker, in his book Dracula, addresses sexuality through the lens of Victorian attitudes and morals.

“When I found that I was a prisoner a sort of wild feeling came over me. I rushed up and down the stairs, trying every door and peering out of every window I could find; but after a little the conviction of my helplessness overpowered all other feelings.”[4][4]

It can be argued that the normalcy of a patriarchal society justifies the male dominance over women that can also be seen in vampire literature. However, the three antagonistic daughters of Dracula are depicted as overtly sexual beings and are likely to be looked upon as unchaste with evil as they do not abide by the Victorian norms.

Joseph Sheridan Le Fanu's book Carmilla is another depiction of the inversion of men, who earlier seen as the doers and protectors, hint towards a passive nature and women taking up roles of an instigator. Relative to Bram Stoker's overtly sexualized antagonists in Dracula, Le Fanu portrays the female vampire's pursuit of the protagonist.

Carmilla's hunger is often framed as an intense sexual attraction towards Laura, who describes Carmilla's bouts of female attention as: [5][5]

Sometimes after an hour of apathy, my strange and beautiful companion would take my hand and hold it with a fond pressure, renewed again and again; blushing softly, gazing in my face with languid and burning eyes, and breathing so fast that her dress rose and fell with the tumultuous respiration. It was like the ardor of a lover; it embarrassed me; it was hateful and yet overpowering; and with gloating eyes she drew me to her, and her hot lips traveled along my cheek in kisses.[6] [6] 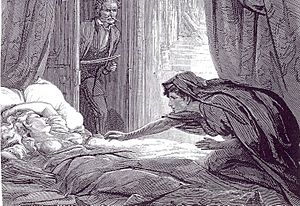 As the story tackles the issues of same-sex relationships or homoeroticism, it has become one of the important literary work in gothic literature.

For the Blood is the life and Dracula are stories where there is evidence relating to Sigmund Freud’s Primal Horde theory. The Primal horde theory basically refers to a system where a son becomes a father not vice versa.[7] [7]

In For the Blood is the life, what can be seen is the way the Primal Horde theory would work under normal circumstances. The son Angelo becomes the new head of the family as he is the successor of Algario and his fortune. On the contrary, in Dracula, the bondage of marriage between the Count and Mina, makes Mina the the loyal servant a daughter of Dracula, “My bountiful wine-press for a while; and shall be later on my companion and my helper.” [8][8]This seems to go against Sigmund's Primal Horde.

Freud also believes that the two drives of a person's behaviour and emotions are sex and aggression which are clearly depicted in these works of vampirism.

In Stoker's Dracula, Stoker's ability to weave together sexual dysfunction with female power and evolution show the complexity of Darwin's theory 1 itself.[9][9]Their distinct styles and themes develop from the epoch in which the scientific liberation caused by the theory of evolution clashes with the simultaneous beginnings of the liberation of female sexuality and power from patriarchal repression and domination.[10][10]

As Darwin's "Origin of Species" challenges religious notions of fixity and Biblical timeframes, it generates the idea of gradual evolution and natural selection. It must be noted that the subsequent discussion of racism, sexism, and the "Other" is an attempt to examine the pair in the light of Darwin and evolution of a different species for the sake of survival (Dracula) and the possibilities of "devolution" (Dorian Gray).[11] [11]

Marx was fascinated by the metaphorical use of capitalism as vampirism. For instance, in Das Kapital, Marx describe his subject as “dead labor, that, vampire-like, only lives sucking living labor, and lives the more, the more labor it sucks.”[12] [12]

A vampire’s continual need for possession and consumption resembles the ravenous thirst of capital, and the thirst it conjures up in those under its spell. [13][13] As can be seen in Dracula, consumerism can be depicted as the Count has no life himself and tends to feed of others which can be observed as the representation of the capital Marx describes.

A recurring theme of sexual or non-sexual interaction in gothic literature, can be argued to always be instigated by the female. Whereas, contrary to the the Victorian woman, males consume a forceful character. Just to list a few of the themes: gender destabilization and inversion, homoeroticism and homosexuality and feminine sexuality are the themes that gothic literature uses to exploit the fears during the Victorian Era.[14][14]

Perhaps the history of women repression and the fear of gender inversion, homosexuality and feminine sexuality, paved way for literary vampirism to be such an interesting read.[15][15] What is more are some of these characteristics of gothic literature still exist today, certainly the repression of women and the idea of traditional gender role still exist to some extent, although there may not be the accusation of witchcraft![16][16]