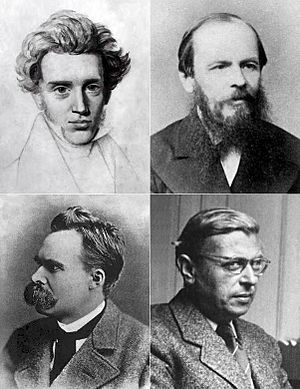 One of Dostoevsky’s existential messages is that the purpose of life is to act properly by being authentic to yourself[4]. He is adamant that rationality alone can be deceiving. He denies the point of view of rationalists and others who value neat schemes above the full scope of individuality[5]. Passions aren’t an enemy of rationality but work in unison to help the human individual live accordingly. It is common for one to identify solely with the content of one’s own intellect, especially if one is intelligent, but everyone also has other faculties, like emotions and motivations. Dostoevsky argues that the abstraction of ideologies has no basis in what one actually is and that makes a person live an inauthentic life[5]. If you are acting out an ideology, it will not fulfill you as an individual because you are not one entity.

As Kaufmann remarks on the novel Notes from Underground, “What we perceive is an unheard-of song of songs on individuality; not classical, not Biblical, and not at all romantic. No, individuality is not retouched, idealized, or holy; it is wretched and revolting, and yet, for all its misery, the highest good”[4]. The nameless protagonist in Notes from Underground doesn’t believe in the utopian rationalist point of view, but he is still unable to live as he surrenders to a state of withdrawal[6]. Through this Underground Man, Dostoevsky shows that there is a moral necessity to live properly. You have free will, you have choice, but you can't just sit in isolation and be useless and resentful or else you will pathologize everything around you and suffer for it. Relativists think morality is arbitrary[7], but to Dostoevsky and the existentialist what is immoral are those things that one can change but does not, and they result in outcomes that are catastrophic. Immoral things are precisely those things you can't get away with and is a form of self-deception. Once implemented, they produce the catastrophe the individual wants to avoid[8], which is what happens to the protagonist Raskolnikov in Crime and Punishment. Raskolnikov could not be inauthentic to himself, and that is what made him sick and delirious, forcing him near the point of suicide.

From his teenage years, Dostoevsky has been in search of truth. Not the scientific truth that is constant across different observers, but being true towards yourself. At the age of 18, in a personal correspondence, he said that “To study the meaning of man and of life — I am making significant progress here. I have faith in myself. Man is a mystery: if you spend your entire life trying to puzzle it out, then do not say that you have wasted your time. I occupy myself with this mystery, because I want to be a man”[9]. Truth is hard to pinpoint since we have ignorance, but it is much easier to identify what is false. Raskolnikov might not know what the truth is but he definitely knows what is false in his life, and that is exactly what he can’t live with. Dostoevsky argues that society is carnivorous and pathological and that members of society become deceitful & irresponsible. It is why it is so believable that Raskolnikov could murder without any real motives. People are psycho pathological because the conditions of existence are so tragic. It is inevitable that the weight of existence will make you that way. And similar to Raskolnikov, one needs to learn to be authentic and thus only after that develop the ability to love. Because of his crime, Raskolnikov has an existential crisis but after being sent to prison is able to find God and Love, which is similar to what Dostoevsky himself experienced after he was mock executed[10].