From UBC Wiki
< Course:Phys341 2020
Jump to navigation Jump to search The pipe organ is an instrument whose origins can be traced back to ancient Greece, with its invention estimated to have been around 200-300 BC, by Ctesibius of Alexandria [1]. Regarded by the likes of Mozart and Bach as "the king of instruments", organs are instruments of incredible historical, cultural and artistic value, many of which can be admired in places such as churches and concert halls.

In the early 20th century, with popular music becoming a large staple of modern cultures, alternatives to the pipe organs were explored, with the wish to introduce the sound into a new domain. Particularly with the aim of tackling the issue of compactness, new technologies were researched with the goal of achieving just that. The most notable and most influential one is of course the Hammond organ, first manufactured in 1935 by Laurens Hammond and John M. Hanert [1]. Figure 1 on the right shows an image of a 1966 Hammond model B3 organ. The following paragraphs explore the technologies used in the Hammond organ from a physical and mechanical stance, to understand the components that drive the invention that impacted so many areas of modern culture.

The Hammond Organ mechanics and components

To begin with, it is important to outline some of the key mechanisms and technological components present in the Hammond Organ.

Perhaps the most important piece of apparatus, vital to the sound creation in the Hammond organ, and one that distinguishes it most from a pipe organ is the tone wheel, of which a Hammond organ usually contains 96. 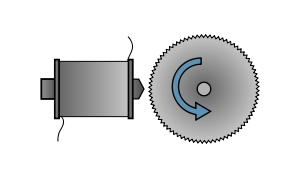 Figure 2: Tone wheel rotating next to a pickup [2]

A tone wheel is a disc typically made of soft iron, with a diameter of approximately 2 inches. The circumference of a tone wheel consists of a series of smooth rounded bumps, or “teeth” of which each tone wheel has a different amount. Each one of those tone wheels rotates in proximity of a pickup (magnetic coil), with equal speed [3]. This process induces a variation in the electromagnetic field around the pickup due to the bumps on the edge of the disk. Figure 2 on the right is an illustration of a rotating tone wheel in proximity to a pickup.

The drawbars are another aspect of the Hammond organ that implements an original technology to replace some functionalities of the pipe organ. Pipe organs would have stop button, or tabs, which would control the airflow into the specific ranks of the pipes. This exploits the fact that the pipes in an organ are arranged both by pitch and by rank (pipes with the same rank each produce sound of the same timbre) [4]. This allows for the user to choose a specific timbre for each note produced, which is done through the choice of opening or closing specific stops in order to access specific ranks.

In a Hammond organ we have the tone wheels producing relatively pure sine weaves. Consequently, the signals from those sine waves need to be blended together by the piece of apparatus called the Tone Generator, in order to replicate the sound a pipe organ would produce.

To do so, the organist uses drawbars which are metal sliders that control the intensity of the particular sound components. Those drawbars are set in a way such that overtones/harmonics from the harmonic series are in an adequate volume mix for the desired sound. There are 9 different option for the retraction of a drawbar (from 0 to 8) representing the relative volume of the particular harmonic. Figure 3 on the right represents a physical drawbar configuration for a Hammond organ.

Drawbars are essentially the reason for which Hammond organs may be referred to as electro-mechanical "Additive synthesizers[5]". The player simply chooses the overtone mix of each note he/she chooses to play, and this adjustment will allow for the choice between a broad number of timbres (flutey, reedy or mellow being some of them). A particular configuration of the drawbars is referred to as a registration, and overall the registrations fall into categories with names such as "stopped flutes", "Half-covered Flutes", "Gemshorns", "Strings", "Vox Humanae", "Reeds"[5] etc... Each registration is uniquely represented by a 9 digit nonary (base-9) number, representing the volume of each harmonic. For instance, retracting drawbars 3, 6 and 8 at volument 8, 5 and 4 respectively is a registration represented by 00 8005 040.

The arrangement of the drawbars and their corresponding overtone is illustrated in the table[4] below. As seen, the drawbars are numbered from 1 to 9, with the relative interval that the particular drawbar controls in the blend. The footage refers to the pipe lengths that would be used on a typical pipe organ, and in that analogy would correspond to the switch/stop that the player would choose to control the airflow into that particular pipe rank.

The tone generator is the "heart" of the Hammond organ, and is what blends all of the technologies described above in order to produce sound. It consists of a shaft onto which are mounted pairs

Figure 4: Tonewheels in a Tone generator

The different sizes of the driving and driven gears, as well as the variation in the number of teeth/bumps on the edge of each tone wheel are what allows the main tone generator shaft to be able to rotate at a constant angular velocity. A picture of an open tone generator is present in Figure 4 on the side.

The method though which the tone generators blends the sound together is relatively simple. When only one drawbar is retracted, the tone produced will closely resemble a pure sound wave. We can then blend the overtones to produce the more complex tones.

Unfortunately, access to a physical Hammond organ was not possible for the purposes of this project. However, using an AKAI MPKmini MIDI keyboard, connected to GarageBand, analysis the frequency spectra of the tone wheel organ was possible thanks to the build in Tonewheel organ virtual instrument. The virtual interface has the following controls for sound adjustment (Figure 5):

Figure 5: The GarageBand virtual interface for the controlling of the Hammond organ sound

Above we observe the setting for a registration of 38 8400 000. With this interface, different registrations were experimented with, and the frequency spectra were analyzed using iSpectrum for MacOSx. To begin with, Figure 6 below shows the the frequency spectrum of an A4 (440Hz) note being played, with registration 00 8000 000, which contains only the fundamental. An audio snippet is available as well through the following link: File:Audio reg 008000000.mp3

Figure 6: The harmonic spectrum of a Hammond organ simulator, playing an A4 note with registration 008000000

We clearly observe the single persistent frequency of 440Hz. Figure 7 below however represents the frequency spectrum generated by registration 38 8000 000. We choose a lower value for the 1st drawbar, to have a cleaner balance between the intensities of the tone, as it was found that having it pulled out to a maximum overpowered all of the other harmonics. An audio snippet is also available:

Figure 7: The harmonic spectrum of a Hammond organ simulator, playing an A4 note with registration 380000000

A much more complicated setting is shown in Figure 8 below, which shows the spectrum corresponding to a registration of 38 8888 880. The audio snippet can be found by clicking the following link: File:Audio reg 388888880.mp3

Figure 8: The harmonic spectrum of a Hammond organ simulator, playing an A4 note with registration 380000000

As clearly portrayed by both the spectra and the audio samples, we see that different configurations of the drawbars will have a notable effect on the frequency spectrum as well as the timbre of the sound that is produced. A large mix of harmonics will go hand in hand to a very dense sound, which with the right configuration of higher overtones results in a very flutey sound. A simple configuration of just a few overtones will go hand in hand with a very mellow sound, as observed on one of the two earlier examples. This experimentation demonstrates precisely why the Hammond organ has become such a popular tool in many areas of our culture, be it rock music or the melodies heard in large sports arenas between the breaks of an NBA game.