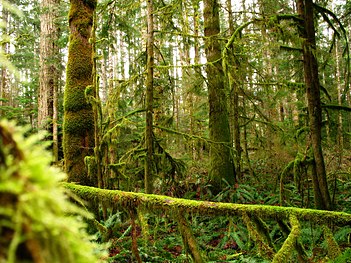 An example of a forest in Vancouver Island, where Qala:yit is located.

Qala:yit Community Forest was created September 8th 2018[1]. It is located on the traditional land of the Pacheedaht First Nation. The Pacheedaht are an indigenous group in the very southern tip of British Columbia, Canada. They have been in the area since time immemorial and have a population of approximately 200. The community is very poor and the forest is expected to financially help the community[2]. There have been two documents that have been crucial to the creation of this forest; the Pacheedaht First Nation Forest and Range Consultation and Revenue Sharing Agreement created in 2005[3] and the First Nation Incremental Treaty Agreement created in 2013[4]. The tenure and administrative agreements are very fair and respectful of both communities, however it is unclear if these procedures are actually going to be followed, as the forest is so new.

A map of the traditional Pacheedaht First Nations area.

The Pacheedaht are a First Nations group in south-west Vancouver Island, British Columbia, Canada. Before European colonilization, the Pacheedaht population was estimated to be around 1,500[2]. Disease, brutality and residential schools have dropped that number to about 200 today[6]. The Pacheedaht community is a very poor community since their logging industry collapsed in the 1980's[6]. The sawmill closed and there was no more hope or livelihood in the community. Additionally, like many First Nations communities in Canada, there is a significant suicide rate in the community. At one point, the community had the highest suicide had the highest teenage suicide rate in British Columbia[7].However, since the addition of Qala:yit community forest and the newly opened Sea Foam fish processing plant[8], there is hope and the community is looking forward to a financial and stable society.

All of the following is paraphrased from the Pacheedaht First Nation Forest and Range Consultation and Revenue Sharing Agreement[3].The purposes of the meetings that led to this document include; creating a healthy relationship between the government of British Columbia and the Pacheedaht planning for a successful socio-economic future for the First Nation group and recognizing the cultural and historical significance of the group. Another very important reason for these meetings was to create a fair and respectful environment for both parties to share their values and goals. This document outlines many aspect of the potential community forest to be born.

Some of these outlines focus on consultations, general operations, financial issues and problem solving. Regarding consultations, the government of British Columbia promises to see problems in the eyes of the Pacheedaht, the Pacheedaht have to abide within their agreed upon border and when the agreement retires, the two parties will meet and discuss negotiations. General operations describes the annual allowable cut, proper and quick communication and a promise to keep both parties up to date. Financial issues and problem solving also involve much consultation and a great effort in both parties.

All of the following is paraphrased from the Pacheedaht First Nation Incremental Treaty Agreement[4].

There are many purposes that this treaty signifies. There are four purposes of this agreement.

In order to meet these purposes, the document outlines many propositions, including but not limited to: How the forest will come into effect, how the Pacheedaht will be represented, how the land will be mapped and transferred, economic matters and negotiation and reconciliation matters. There are examples to illustrate all of these propositions.

The treaty does not give an exact date of when the community forest would be put into effect, however there is a schedule of the order of when certain negotiations will take place. For instance, mapping out the land is the first step whereas assessing gravel resources is the last. To be properly represented, the chief of the Pacheedaht will attend every meeting and negotiations and there is a recognition that the Pacheedaht have rights and privileges in this agreement. To create a map, the land is divided into lots and lots 247 Block A and B, and lots 251 and 252 are going to grow into Qala:yit. Additionally, there are perimeters to ensure sustainable cut and management. Taxes are discussed. Additionally, much of this document lay out conflict resolution, recognition of the Pacheedaht and the promise that both parties are fairly represented.

The tenure arrangement of Qala:yit is long term[1], which can be five to thirty years[9], and area based[1]. This tenure arrangement is similar to the tenure in Little Prairie, BC[10]. Though Little Prairie has a high focus on using indigenous knowledge to maintain the forest and it is unclear whether these strategies will be used in Qala:yit but the focus of indigenous engagement and advancement is very important in both community forests.

As well, since Qala:yit is a long term initiative, there is much hope that the forest will help the community integrate better community amenities such as social workers, better schools and basic structures a community needs like a water treatment center[11].

Fifty percent of profits made by BC Timber are given to the Pacheedaht community, however since the agreement is so new it is unclear whether this is actually happening or if the money will be funneled into the right things, such as a water filtration system. As well, it is not clear yet whether a certain percentage of people from the nation are expected to work in the forest.

A picture of the BC Parliamentary Building. This is where governmental decisions are asserted.

The Pacheedaht would be the primary affected stakeholder because they are culturally and spiritually connected to the land. They have been in this area since time immemorial and have incorporated parts of the land into their life and culture[2]. Additionally, if the project fails, they do not have anywhere else to go and will have to live with the consequences of a failed forest. However, if the project succeeds the revenue will help the community immensely. As of October 2018, they are having an increase in job opportunities, as well, the community has built a water treatment center and improved roads[11].

There are two main interested outside stakeholders; the government of British Columbia and BC Timber.

BC Timer is also an interested outside stakeholder. BC Timber oversees about 20% of the forest in British Columbia[12]. They also employ over 8,000 people, including some of the Pacheedaht community. BC timber is financially interested, they have thousands of hectares of forest to look after, the potential failure of Qala:yit will not emotionally and spiritually impact them so they are not considered affected.

Qala:yit is such a new community forest that there is not enough known to determine if the project is a success or not. However, the two preceding documents were made to be as precise as possible and have ample problem solving practices. As well, both documents mark an important step for the government of BC and the Pacheedaht First Nations. The government is showing that they are ready to reconcile and settle their differences. The Pacheedaht need financial support and this is a huge opportunity for them to make ends meet.

There is not much room for recommendations since there is so little known about the actual practice of the forest.