The Miao nationality is an ancient nation scattered throughout the world, mainly distributed in China's provinces such as Yunnan, Hunan, Hubei, Sichuan, Guizhou, Guangxi, as well as Laos, Vietnam, Thailand and other countries and regions in Southeast Asia. As a First Nation with over 5,000 years’ history, Guizhou province is chosen as the main settlement of the Miao People. Adhering to the survival mode of “slash and burn”, the Miao People have relied on the forest to survive on this land for a long time. As China’s history continues to advance and change, the rights of the Miao People in forest use and management are also changing. In this case study, I will mainly focus on the changing ownership of forests after 1981 (China's opening up) in Miao community forests, Guizhou Province.

Leishan County is located in the southwest of the south-western Miao and Dong Autonomous Prefecture (Guizhou Province), with a total area of 1218.5 square kilometers. The Leigong Mountain, one of the most famous mountains in Leishan, Guizhou province, China, is consisted of more than ten peaks (over 1800 meters). It has the most intact and original natural Taiwania flousiana community in China and is considered as an extremely valuable species gene bank for wild animals in China. The ethnic group dominated by the Miao nationality in Leishan County is rich in profound cultural connotations with 5,000 years of history. With abound of forest resource, the ancestors of the Miao nationality accumulated a lot of experience through a long time in order to use and manage the gifts of nature better. Nowadays, Miao People has formed a unique management system for natural forests. 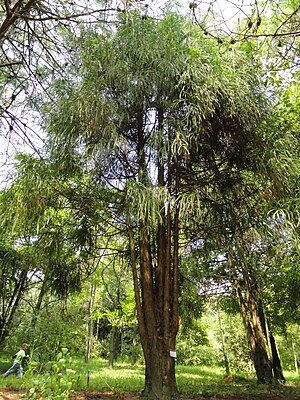 As one of the key counties for national poverty alleviation and development, Leishan has improved a lot in social construction. The management of local community forests have been strengthened by the State as well. However, the current management of community forest is not perfect because of the conflicts between the customary practices of Miao People and codified laws of the State.

The Miao nationality was the earliest rice-cultivating nation. In the primitive society, the Miao People used leaves as clothing, caves or tree nests as their homes. Up to now, the Miao People have developed their unique culture and reflected in all aspects.

“Yilang” is a system of agreed conventions in the Miao society and a regional political and economic alliance organization[5]. The size of the organization is different, and several or dozens of stockades are the most common. The highest authority of Yilang is “Yilang Convention”. Its main task is to discuss major issues, formulate disputes, and elect various deacons. “Yilang” manages the daily life of Miao People through customary practices and regulations, and the regulations have become unwritten laws once they have been approved by the Miao People. “Yilang” of Miao People played an important role in maintaining local production, life and social order. Up to now, in many areas of Miao, the form of “Yilang” still exists. “Yilang” has become an effective supplement to the government’s administrative organization in some degree[5]. The Miao People in Leishan County have developed their own customary practices in managing their community forests and divided the community forests into three parts.

There are some recommendations, as far as I am concerned, may be effective for improving the problems.