Fishermen in Seward, Alaska with a fresh catch of halibut. June 2015

In North Pacific, commercial halibut fishery has been one of the region’s most profitable industry since the late 19th century. In 1995, the Individual Fishing Quota (IFQ) Program in halibut and sablefish fisheries in Alaska was implemented by the North Pacific Fishery Management Council (NPFMC). This program was designed to limit access to the fishery, reduce overcapacity, and address conservation and management problems that are endemic to open access fisheries. However, the fishing rights of people living in small remote fishing communities were violated and they had to share fishing resources to people from outside of the communities. A program named Community Quota Entity (CQE) program later, as an amendment to the IFQ program, was aimed to redistribute the wealth but did not ameliorate the situation. People in the small remote indigenous communities had to sell their quota given that the quota they had was not enough to support their living, neither could they afford the quota price if they wanted to buy more quota. Western ways of fishery management came to dominate the decision-making process and the interests and ideas of indigenous people were ignored. This paper explores how the lack of equity due to the privatization of fisheries in Alaska made neither the IFQ program nor the CQE program a success in the Old Harbor and other Alaska Native Villages.

As one of the Alaska Native communities, Old Harbor, is a city in Kodiak Island Borough, Alaska, United States. It has a total area of 26.5 square miles (68.7 km2), of which 20.5 square miles (53.2 km2) is land and 6.0 square miles (15.5 km2), or 22.59%, is water (U.S. Census Bureau)[2]. The population of Old Harbor kept declined during 1990-2010 when the fishing quota program implemented. In 2016, there were only 218 people according to the “Population and Housing Unit Estimates”. Carothers’s research showed that population size of the individual’s community would affect their decisions regarding quota sell/purchase (Carothers, 2010, p.520)[3]. 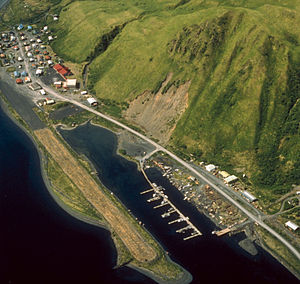 The landmark 1971 policy implemented by the Alaska Native Claims Settlement Act (ANCSA) reinstated the title of Alaska Native to the land more than 40 million acres, but did not acknowledge aboriginal title to any marine space or sources (Richmond, 2011,p.335)[4]. The indigenous people who relied on fishery had lived in Alaska for thousands of years (Richmond, 2013, p.1074)[1], and communities like Old Harbor relied more on the ocean than on the land.

The form of tenure was state-owned property. Indigenous people and other non-indigenous people still had customary rights to the fishery property. However, State, with coercive power of enforcement, had the administrative rights and thus could make decisions concerning legal access to the resource and the level and nature of management.

This program was implemented by NPFMC, the federal agency managing Alaska’s fisheries. The IFQ program aimed at limiting access to the fishery to avoid the “tragedy of commons”, reducing overcapacity, and addressing conservation and management problems that are endemic to open access fisheries (Richmond, 2011, p.335). [4] It was a market-based program that allocated a certain portion of fish to individuals, businesses, and other collectives from a total catch limit (Carothers, 2011, p.213)[5].

In this program, the type of tenure held by the indigenous people was private property with partial ownership. With privatization, fishermen were given ownership over a restricted part of the resource, converting it from common property to private property (Richmond, 2011)[4]. However, unlike resources on land, marine resources like fish have higher mobility and fishermen have no control of the ocean, thus there was lower exclusivity in this case (Arnason, 2005, p.249)[6]. Any legal individuals and collectives had rights to a certain portion of fishing property and they could benefit from harvested fish. At the same time, however, they fishing behaviors might be interfered by other fishermen (Arnason, 2005, p.247).[6] Besides, fishing quotas in this program had transferability, which aimed to encourage economic efficiency and reduce over-capacity (Carothers, 2010, p.518).[3]

In the IFQ program, the tenure held by the indigenous people and other eligible individuals/companies was private property, therefore they themselves could manage and direct the fishing activities within the U.S. government’s regulations.

The Community Quota Entity Program was designed by the NPFMC as an amendment to the IFQ program because there were some unintended results after the implementation of the IFQ program (Carothers, 2010, p.213).[3]

In this program, indigenous people from small, remote, coastal Gulf of Alaska communities could purchase fishing quotas and retain fishing rights collectively as communities, provided that they had had a documented history of participation in the commercial halibut fishery (Carothers, 2011, p.216).[5] It could be considered as a protection for indigenous people living in small remote fishing communities, since large fishing companies would have larger financial capacities and could potentially purchase more quotas when less profitable fishermen exited the fishery (Carothers, 2010, p.520).[3]

The type of tenure held by the indigenous people was communal property. In order to redistribute the wealth, a certain portion of total allowable catch would be granted only to communities that met the criteria (small, remote, coastal, with documented commercial fishing history), given they had applied for the fishing quotas (Carothers, 2011, p.215).[5] Local fishermen of these communities would purchase quotas from their communities (Carothers, 2011, p.215).[5]  It is worth noted that, same as in the IFQ program, the exclusivity in the CQE program was low regarding marine resources (Arnason, 2005, p.247).[6] In the Old Harbor community, many individuals associated the Community Quota Program with the Old Harbor Native Corporation, an indigenous village corporation established by the Alaska Native Claims Settlement Act of 1971 (Carothers, 2011, p.217)[5]. By using the funds from this village corporation, people in Old Harbor was able to finance the purchase of 30,000 pounds of halibut quota (Richmond, 2013, p.1076).[1]

In both programs, the affected stakeholders were indigenous people who, with few alternative economic opportunities, relied on fishery and had deep connection with fishery tradition (Carothers, 2011, p.216).[5] Fishing quotas were granted to certain individuals or collectives based on historical participation in commercial fishery, however, some of the indigenous people did not have their own boat and could not obtain enough fishing quotas to support their families (Loring et al.2014, p.195).[7]

The affected actors had no power in the decision-making process. Due to the inequality after the privatization of fisheries in 1995, people who lived in those small remote fishing communities had to sell their quota because they either could not earn enough money to support their families given the limited amount of fishing quotas, or could not afford the quota price (Richmond, 2013, p.1076).[1]

The interested stakeholders in this case study are people who would not be directly affected by the fishing quota programs. They would have incomes no matter what happened in the fishery industry.

Ph.D. students were interested stakeholders because they did not rely on the income of selling fishes. They were interested in the development of indigenous community because they did their researches on the topics related to fishing quota program implemented in the Alaska Native villages. Ph.D. students would have few power, besides their academic objectives, the papers might arouse the concerns of policy makers who should be categorized as interested stakeholders, but with more power.

Policy makers in North Pacific Fishery Management Council were also interested stakeholders because they were concerned about the future of Alaska’s fishery which could bring huge revenue (Alessi et al. 2013, p.217)[8]. Their salaries would not be affected by the fluctuation in fishery industry. Apart from maintaining the productivity of fish stock to gain more revenue, the main objectives of policy makers was to favor political will regarding over-escapement (Loring et al. 2014, p.194).[7]

The Old Harbor’s fish approaches were marginalized by the Western-oriented management of the halibut fishery,. First, the indigenous people had lived in Old Harbor for thousands of years, however, their ideas about the biological status of fish stocks and surrounding climate differed from the dominant Western science approaches (Richmond, 2011, p.vii)[4]. Second, the Old Harbor people’s understandings of fish ownership was different from “those inherent in the 1995 Individual Fishing Quota (IFQ) program that privatized the halibut fishery” (Richmond, 2011, p.viii). [4]Third, regarding the regulatory areas and the halibut assessment, the top-down spatial decisions were made by managers and biologists who were distant (Richmond, 2011, p.vii-viii).[4]

In 2005, the CQE program was established by NPFMC in halibut (and sablefish) fisheries to amend the IFQ program and redistribute the wealth, given some unintended results of the IFQ program (Carothers, 2010, p.213)[3]. The CQE program mirrored a program called Community Development Quota (CDQ) Program but the CQE program asked fishermen to purchase fishing quota (Richmond, 2013, p.1075).[1] For Alaska Communities that met the criteria: “a population less than 1,500 people, no road access to larger communities, direct access to salt water, and documented historic participations in the halibut fisheries”, they would be the primary recipients (Richmond, 2013, p.1075).[1]

However, this program did not achieve its goals in practice. Only two of the communities (Old Harbor in 2006 and Ouzinkie in 2011) were actually able to purchase halibut shares (Carothers, 2011, p.216).[5] One of the reasons was that it did not include indigenous people who out-migrated due to poor economy in the IFQ program (Carothers, 2011,p.215).[5] Besides, high cost of quota shares and few financing options made it difficult for indigenous people to purchase more quota as needed (Carothers, 2011, p.215).[5] From 2006 to 2009, quota shares was leased to 5-10 participants using 3-5 vessels each year (NPFMC, 2010).[9]

One major conflict was the incompatibility between the Western management structures and indigenous ideas regarding how to use natural resources (Richmond, 2013, p.1071).[1] Indigenous interests, at most time, was marginalized in important fisheries. In another word, indigenous people were usually required to sacrifice their important desires if their ideologies need to fit within the Western management regimes (Richmond, 2013, p. 1081).[1]

The participation of indigenous people in fisheries management was limited. As affected stakeholders, these people often needed to bargain power of crew and hired-captains (Loring et al. 2014, p.189)[7]. “Members from these small, remote, primarily indigenous communities have had little representation or power in the federal fisheries management process” (Carothers, 2011, p.216)[5]. Some regional advisory councils provided a platform for the users to give feedback in the form of testimony in open meetings (Loring et al. 2014, p.189)[7].

For researchers who payed close attention to the impact of fishery privatization, some of them might have some influence and power, provided that they had kept contact with policy makers. Besides their academic objectives, the papers published would arouse the attention of society and might exert some political pressure to the council.

For policy makers, they had relatively the largest power. As an officer in North Pacific Fishery Management Council, he/she could make decisions regarding legal access to the fish. They were also concerned about the large revenue of fish stocks. Besides, they also made policies favored the political will, which based on the overestimate number of carrying capacity in water body and caused the over-escapement problem. (Loring et al. 2014, p.194)[7]

The fishing quota programs did, to some extent, successfully limited the access to the fishery. However, there should be some important elements, which could potentially avoid the failure. The allocation of fish quota should not only base on the fishing history, because it would discourage the entry-level fishermen. Apart from that, there should be some info sessions for indigenous people regarding bank financing, which would make it easier for them to purchase fish quotas as individuals. Besides, the involvement of indigenous people in the management of traditional fish resources is also necessary, given that indigenous people always have their own experience and ideas.