This case study focuses on one of the National Nature Reserve areas in China – Wolong. It will examine the relationships among different stakeholders as well as their relationships with the environment, natural resources, including 245 types of endangered species and 57 types of animals. Wolong National Nature Reserve is located at the southwest of Aba Tibetan and Qiang Autonomous Prefecture in Sichuan province. The establishment and regulation of the area involved a number of stakeholders, including the national government of China, the provincial government, local people, farmers, funders, local businesses, and tourists, etc. Since the governments attached great importance to the region and plan, this area had an organized and promising start in 1963. However, the involvement of local people has been limited. Local farmers and residents had a significant negative impact on local land cover changes, which caused degradation of the panda’s habitat. Hence, more official involvement of local people with future decision making and maintenance responsibilities, as well as developing new policies are necessary steps to reach their goal of “establishing a harmonious relationship between human and nature.”[1] Wolong National Nature Reserve is located southwest of Aba Tibetan and Qiang Autonomous Perfecture in Sichuan province, China. The climate in Wolong provides favorable conditions for the growth of bamboo. Hence, it is a suitable place for panda reproduction and survival.

It is the third largest national nature reserve and one of the earliest comprehensive national protected areas in China. Wolong National Nature Reserve has unique geographical conditions and complex geomorphic types. It contains mountains, rivers, and forests, and caves, etc. This special and unique characteristics made it home to more than 2600 animal species, which include about 56 kinds of rare and endangered animals such as the giant panda, golden monkey, snow leopards, and takin, etc. It also owns more than 4,000 plant species, and 24 of them are listed as rare and endangered species. Due to its location, the area is also rich in Tibetan and Qiang ethnic cultures.[3]

In addition, according to Measures for the Administration of Land in Nature Reserves (1995), the lands within any reserves in China shall be state-owned or collectively-owned. State land users and collective land owners should apply to the land administrative departments of the local people's governments at or above the county level for land registration and land certificates.[4]

When Wolong Nature Reserve was first established in 1963, it was only under the administration of Wenchuan county.

After enlarging the area of the reserve in 1975, it firstly became under direct leadership by Sichuan province, and later by the Ministry of Forestry.

From 1978 to 1981, in order to strengthen the protection of resources, the Reserve Administration set up five resource protection divisions. These division stations are located at the entrances and exits of the reserve, the local residence areas, and areas where important natural resources are distributed.

Approved by the State Council in 1983, Wolong Special Administrative Region was established to merge work with Wolong Nature Reserve Administration. Their aim is to better protect the endangered species as well as the interests of the members from two communities (Gengda and Wolong townships) located inside the reserve. With the additional help from Wolong Public Security Bureau and Forest Armed Police Squadron, unlawful felling, poaching, and killing endangered species including the giant panda were strictly monitored and punished.

There are more than 4,000 residents that were living in the reserve area before it was established. Most of them are illiterates who knows nothing about environmental protection, biodiversity, and endangered species. They believe in making a living in one's given circumstances, such as the forests and animals around them. Therefore, they hunted animals for food; they fell trees for constructions and fire without regulations. On the other hand, after the reserve was established, the restricted felling and hunting made local people’s lives harder, and they became more dependent on the government for economics and employment opportunities such as tourism. [6]Their main objectives are to continue supporting themselves with the natural resources around them, increasing their livelihood by having more employment opportunities inside or around the reserve. Since they have no money and ability to move outside the reserve, they are highly dependent on the land and the area. Therefore, they have a very high interest but a low power or influence.

Farmers are the most important stakeholder that results in fragmentation of the reserve. However, they have been relying on farming to meet their needs for food and make income. The establishment of the reserve has greatly reduced their land use for farming. The conflict between agricultural use and natural resource protection has been a major issue inside the reserve. The farmers wish to continue farming with enough space, therefore, they have a high interest but low power to decide where and how much area they could farm.

The State Council holds the ultimate power on approving, declining, and deciding proposals about policies and regulations of the reserve from provincial governments. They have low interest but a high power.

They have a closer relationship with the reserve to regulate, manage, and monitor it. And they seek economic and employment opportunities for the local people inside and near to the reserve. They have moderate interest with a relatively high power.

They helped to establish the reserve and donated for post-disaster reconstructions. They also continue to provide money for research, breeding, and protection of pandas and other animals in the area. They have moderate interest with low power.

Tourism is a major income source for local residents, research centers, and local governments. Tourists visit the reserve to watch and learn about the environment, endangered animals and plant species. They could also become volunteers to help inside the reserve. They have low power and low interest about the policies and regulations of the reserve as well as the livelihood of people living there.

They establish surveys and assessments about the natural resources, animal and plant species, and livelihood and job opportunities of local residence. They have moderate interest with low power.

Businesses such as tourism companies and timber companies, etc. seek economic opportunities inside the reserve to make profit. Heavy timber harvest by the timber companies and businesses led to the destruction of panda’s habitat. As a result, the number of wild animals including pandas had a sharp decline. However, tourism was an important income source for local people before 2008, and they have been highly dependent on tourism-related businesses. [7]They have a high interest on the natural resources in the area that could bring profits but a low interest on the harmful environmental impacts and the animal habitats inside the reserve. They also have a low power on policy and decision making. 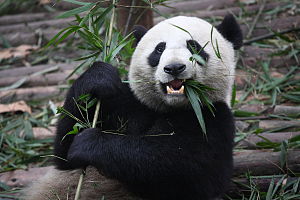 The primary aim and intention of establishing Wolong Nature Reserve is to create “a world-class biodiversity conservation base; a model of harmony between human and nature".[1] It is also aimed to protect the natural habitat of giant pandas and other endangered rare species.

The reserve and the China Conservation and Research Center for Giant Panda within the reserve are aimed to be used for reproduction, breeding, scientific studies, and wildness training of giant pandas.

The interested stakeholders such as the national and provincial governments have much more power in the governing and decision-making processes. Because they are the ultimate decision makers that decide the changes or regulations of the reserve. They establish and execute laws, policies, and penalties for the protection of the reserve. They plan and decide the distribution of different functional areas inside the reserve, such as buffer zone, residential areas, experimental areas, and core zone.

Other interested stakeholders such as business companies, Reserve Authorities, and foundations may have high interests to either make profit out of the reserve or study and better protect the species inside it. But they have little or no power on policy or decision making and regulation of the area. Nevertheless, the environmental assessments and surveys performed by the Reserve Authorities would influence and have some impact on policy and decision makings by the governments and authority groups.

The affected stakeholders such as local residents and farmers have little influence or power in the reserve. Although they have been living in the area through generations, they had neither influence on the establishment of the reserve, nor power on decision-making and regulation processes. However, they show a positive attitude towards the cooperation with the governments, and they wish to be more actively engaged in the activities or jobs inside the reserve.[17]