Course:FRST370/Projects/Analysis of the management of village fengshui forests in the Pearl River Delta, China Village fengshui forests (VFF) are small forest patches in rural landscapes of Southern China[1]. These remnant forests are coexisting with natural villages and in which the indigenous residents protect the forest in their traditional ways. These ways are based on Chinese geomancy beliefs called fengshui, which are regarded as important influences on their wealth and health[2]. In recent years, VFF attracted many interests from ecologists for its value of biodiversity conservation. Also, to protect VFF more efficiently and wisely, Ministry of Forestry in Southern China launched the shareholding integrated forestry tenures (SHIFT)[3] to achieve a co-management between government and local community. Meanwhile, the VFF are still facing threat from industrial pollution, urbanization, and other form of economic development. Most of latest studies focus on villages in Pearl River Delta region of southern Guangdong, while they rarely discuss how forests are protected by indigenous people and the ways how state shapes these practices. This case study aims to give an overall view of VFF in modern rural China focusing on the traditional fengshui forest protection and co-management practices among stakeholders. 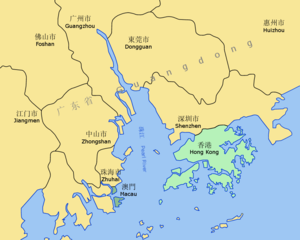 The Pearl River Delta is located along the east coast of Guangdong province in South China (Figure 1). It is one of the leading economic regions of the country. The regional landscape is highly deforested and coverage of formerly widespread primary forest is less than 1.5%[1]. Fengshui forests in Pearl River Delta involve fengshui woodlands in Shenzhen, Guangzhou, Foshan, Dongguan, Zhuhai, etc[4].

Fengshui means wind and water in Chinese, and fengshui is configuration of land form and body of water that can influence daily life of local people and whole welfare of community[2].

People in rural area of China consider fengshui as important reference for setting houses and planning lands, and it is believed related to human health and wealth[2]. Fengshui forests have been widely practiced in China for more than 2200 years[1].

Fengshui forests are typically located adjacent to human settlements in order to enhance the physical and spiritual qualities of the local environment[5].

The desirability of a site, in terms of Fung Shui, is closely associated with its geomorphology and the presence of certain crucial landscape features. For example, the site should be in front of mountain ranges and surrounded by enfolding mountains on its left and right; this is based on the belief that vital living energy would reach the site after flowing along the mountain ranges behind the site, with the enfolding mountains helping to trap this energy and prevent it from being dissipated by strong winds. A favourable Fung Shui site is expected to be able to preserve vital living energy because the accumulation of such energy is believed to be beneficial to the inhabitants[6].

High degree of degradation and destruction of fengshui woods in Guangdong Province, in particular, coastal areas and islands are threatened by severe anthropogenic ecological disturbance and the fengshui woods were described as one of the few remnant coastal forests and the last green barriers to virtually complete deforestation[5].

Fengshui forest has significantly important value for restoration of zonal vegetation[4].A total of 698 species were found in 30 selected fengshui groves[4].

Village fengshui forests are the product of ancient fengshui theory, and have close relationship with traditional Chinese culture.

Fengshui forests are also related to the local social development and regional folk culture, reflecting local religion. They are important evidence and reference for studying fengshui culture and local custom in Pearl River Delta, and even represent the ancient wisedom in Chinese long history.

Intensified promotion of afforestation occurred at the beginning of each dynasty; however, rampant cutting and misuse of forest resources were frequently found during conflicts among different political interest groups and dynasties[3].

Due to the Great Leap Forward movement in 1950s, amount of fengshui woods, which were maintained and protected through generations, were logged for charcoal to make steel[8].

During the Reform and Opening period in 1980s, for the purpose of developing economy, large areas of fengshui forests were destroyed by government to use lands[8].

In rural regions of southern China before 1949, state control was almost nonexistent; anarchy prevailed, order being preserved by the lineages and other associations…anarchy in peasant villages meant not chaos and strife, but a dependence on mutual-aid and kinship ties to preserve order and efficiency[9].

The Land Reform Law of 1950 called for the expropriation of land held by the landlords. It essentially substantiated the system of private ownership by transferring property to the land-poor and landless, while at the same time confirming the rights of relatively well-off middle-class peasants. State ownership was mandated for large forests and other types of land for reasons of both strategic importance and management efficiency[3].

Then the main pattern of property became the mutual-aid team, which had risen to 51% of total villages in China by 1955. Generally, three to five households formed a mutualaid team of a temporary type, and some 10-30 households a team of a permanent nature. Farm land and tools continued to be owned by individual households, but labor was pooled and people worked together[3].

After the Chinese countryside experienced a period of relative stability, collectivization proceeded quickly between late 1957 and early 1958 due to the installation of the People’s Commune system (1958- 1978). Maoist policies were designed to achieve accelerated and balanced development of both agriculture and industry on a foundation of heightened socialist political consciousness. Forest management and afforestation, like other sectors of society, were affected by the policy changes of what was to be known as the Great Leap Forward (1959- 1961). The changes were abrupt, as shown by a comparison with the previous directives which were intended to further the consolidation of cooperatives by slowing down social change to enhance production[3].

After 1949, land redistribution was carried out across China, and during the Great Leap Forward (1958-61), croplands, bamboo forests, and fengshui forests were usually desig­nated as collective lands (jítĭde tŭdì) and only productive forests and other lands at greater distance from the village were designated as national lands (guóyŏude tŭdì)[9].

Concerning the traditional values and spiritual importance of fengshui forests, local village communities in China have traditionally developed certain collective rules regulating the actions of people with respect to the forests[6]. In ancient China, people extremly admired fengshui forest, regarding trees as a pattern of animating. They strictly prohibited logging. Benefitting from limitation and protection, village fengshui forests were able to grow well beside villages.

Co-management between Community and Government

However. releasing community forests to individual households resulted in mass illegal and premature cutting of over I million ha of forests in south China because of the lack of confidence in the policies related to the HT system. The seemingly high economic gain from the illegal cutting was at the sacrifice of sustainability[3].

The Chinese government observed the damage caused by HT in many forestry regions in the south. Over much of southern China, as a consequence, forests are now managed by various systems of village and govcmment collectives[3].

During the years 1983 and 1984. a completely new forestry system, the share-holding integrated forestry tenure (SHIFT) system: was introduced to several villages in Sanming. In this system, locally elected village SHIFT boards participate in managing all aspects of forestry production. Villagers hold shares in the SHIFI system and, as with corporate dividends, receive a share of the net profits .from their forestry activities. Villagers also work in the forests through a tenureship arrangement whereby they contract with the SHIFT board to plant. tend and harvest the trees[3].

Local people believe that fengshui forests are protecting their health and wealth. Some remote regions did not suffer from industrial development and still remain old-growth forests. The trasportation is not convenient there so the tourism is not developed. Most of local villagers live on fishing and growing crops such as rice, pineapple and longan.

However, in some small villages, such as Bokeng, people are not realizing the importance of forests. They still need to log wood for daily needs, which lead to serious destruction of village fengshui forest nearby.

Some villages are near the popular tourist sites such as coastal areas. Those villagers mainly live on tourism.

Some villages such as Dasha are locating near roads, providing timber to furniture factories. The factories also accelerated local econimical development. However, meanwhile, the local forests suffered from serious destruction due to over logging.

Coastal tourist areas attracted large amount of tourists, that brought both local and neighbor tourism development. Also the national parks and provincial parks are popular. Ancient tree is regarded by Chinese people as sacred wood and can bless people. Many tourist workers use this character to attract visitors.

Fengshui forest has significantly important value for restoration of zonal vegetation[1]. Many ecologists and forestors work on the projects to study the fengshui forests and to reserve the valuable species.