Inukshuk Emblem of the 2010 Olympic Games

In 2010, Vancouver hosted the Olympic Winter Games, with an Olympic Village that became a ground-breaking model for urban ecodesign known as ‘Vancouverism’. The Olympic Village is located on traditional, unceded, ancestral territory, shared and overlapping between the First Nations of Squamish, Musqueam and Tsleil-Waututh [1].

Historically, the land was used by the Squamish First Nation as a winter residence. In 1959, the first European explorers arrived (Richardson, an English sea captain, renamed the area "False Creek"). Following the industrial boom of the 1950s-60s, the land was repurposed for housing in the 1970s [2].

During the controversial bid to host the 2010 Olympic Games, the community of Vancouver accepted the proposal, stipulating a condition to include affordable housing. Unfortunately, the Olympic Village failed to deliver an inclusive housing plan. Today it is recognised as a pioneering ecodesigned neighbourhood and green community, despite persistent challenges to community management ([3] p.7). 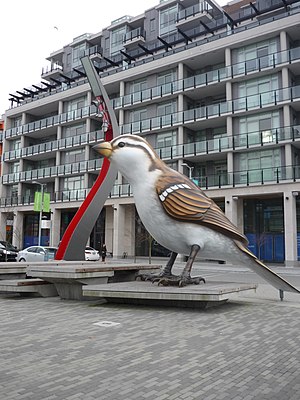 Sculpture of a sparrow in the Olympic Village, Vancouver

Vancouverism is the popular name for a style of urban planning, pioneered in Vancouver, a coastal city in western Canada.

The founding idea of Vancouverism is "to bring homes and workplaces closer together [… with] progressive notions about livability, environmental compatibility, fiscal management, entrepreneurial governance, and inclusive public engagement as well as an emphasis on elegant urban design.” ([3] p.3)

With the creation of dense neighbourhoods filled with amenities, the vision of Vancouverism is to foster a diverse community spirit ([3] p.4). The ideas of Vancouverism are present in numerous cities (Toronto, Portland, San Francisco, Helsinki, Madrid, Seoul) by transforming of old industrial districts, creating urban landscapes, encouraging walking and cycling, and fostering “compact but comfortable residential areas” ([3] p.6) as an environmentally-conscious solution to urban pressures. View of the City of Vancouver from the Olympic Village

These stakeholders have shared or overlapping rights, however they are brought together as one community under the concept of Vancouverism.

The City of Vancouver acknowledges that the Olympic Village is located on the traditional, ancestral and unceded territories of Squamish, Musqueam and Tsleil-Waututh First Nations. These overlapping territories were characterised by tidal flats with bountiful seafood [4][5].

Aboriginal and Non-Aboriginal peoples have built a home on an integrated territory, which, since 1886, recognises both the Salish territory and the City of Vancouver as owners of the land ([6] p.5).

→ The duality of tenure in Canada is similar to Senegal [7] in that there are two recognised systems of power: First Nations’ (or indigenous) hereditary power as well as democratic power of elected rulers.

The history of South False Creek, the site of the current Olympic Village, is a complex succession of tenure agreements [2].

"The Olympic flame burns before more than 60,000 spectators at BC Place stadium during the Opening Ceremony of the XXI Olympic Winter Games, Feb. 12, 2010, Vancouver, British Columbia, Canada." 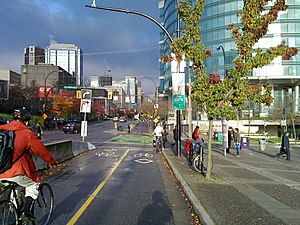 Vancouverism: the city is designed to facilitate cycling and walking.

The community of Vancouver accepts to host the 2010 Olympic and Paralympic Winter Games, conditional to the creation of affordable housing as a by-product [2]. The South East shore of False Creek is leased for Olympic development. Urban designer planned the development of Olympic infrastructure based on 3 pillars of sustainability: economic, social and environmental benefits [3].

As an Olympic host city, Vancouver has repurposed a signification portion of the $6 billion Olympic investments, and benefited in land economy, tourism and amenities [8].

“At the macro level, the 2010 Winter Olympics have helped in the realization of Metro Vancouver’s longstanding ambition to fashion the region into a network of transit-oriented, walkable, neighbourhoods with a world-renowned quality of life.” [8] 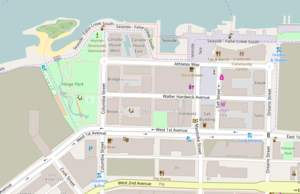 The City of Vancouver summarises the chronology of land agreements and administrative arrangements at the Olympic Village from 2002-2012 [14]. 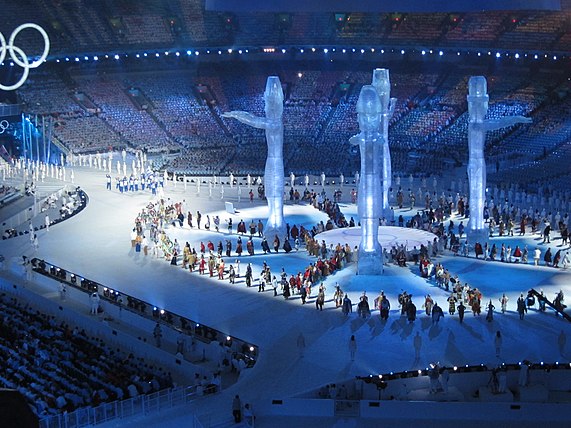 The affected stakeholders are those members of the Olympic Village who are dependents or hereditary stewards of the land. They not named nor explicitly acknowledged in the City of Vancouver’s communications in terms other than “the community” [14]. However, the City of Vancouver Dialogues Project ([6] p.7) acknowledge the following affected stakeholders:

These affected stakeholders receive a voice through the Dialogues Project, a slow process of mutual understanding and respect of the three communities who interweave Canada’ cultural fabric:

Marginalised and racialised communities or individuals [15] have no voice; their interests are pursued by public pressure (such as protests for affordable housing [16]).

→ The colonial history of land claims in Vancouver bares similarities to Apaa, Uganda, where the State government sold communal land without consent from the local community.

‘Vancouverism’ has blurred boundaries between the constituent communities within a large interwoven urban community, due to their shared experiences and history ([6] p.10). Even so, self-definition is sought by community members to navigate the complexities of race, oppression, and identity ([6] p.25).

The interested stakeholders have interests or power in the Olympic Village, however they are arguably not culturally tied or dependent upon that land. They include:

The goals of Vancouverism are built around the Millennium Developmental Goals, with three pillars of sustainability: economy, society, and environment, see as integrated issues. These goals translated as [5]:

The urban design of Vancouver’s Olympic was a feat in sustainability [3]. However, the affected stakeholders – the local community – felt the major weakness in the rising inequality and housing crisis [19]. De facto, the development of the Olympic Village became a battle between businesses and residents [2].

→ The slippage between de jure and de facto rights is similar to the case of Senegal [7]. In both cases, the amended tenure agreements represent a withdrawal of previous legal rights; as a result, the more marginalised residents became incapable of exercising their property rights.

The voice of capital economists is recognised with authority; hence, the City of Vancouver sought “Development sector experts” to provide advice on the development of the Olympic Village [14]. The dialogue between city planners and local residents was a commendable effort in participatory decision-making. Nonetheless, the Dialogues Project [6] explored the struggles of meaningful community dialogue within Vancouverism. Indeed, the Public Hearings of 2006 [14] were similar to the Forest Protection Committee meetings in West Bengal, India (under Joint Forest Management) in facing the challenge of engaging with an community representation [20]. The Dialogues Project (a multi-stakeholder initiative) operates on slow time-scales, too slow for meaningful impact in the land planning decisions of the time-pressured Olympic Village. (The 2010 Olympic Winter Games was required to followed the International Olympic Committee’s tight timeline, enforced with high international pressure). The difference in time-scales leads to “slow violence” [21] wherein the vulnerable and marginalised communities bear a disproportionately large burden of social and economic problems.

The construction of the Olympic Village exceeded its budget by 2006. As a result, the Official Development Plan was amended such that 600+ social housing units were cut and funds redirected to support green technology infrastructure. The promise of inclusivity was neglected; unaffordable housing was further exacerbated by Olympic speculation on real estate. The economic burden placed upon resident taxes to alleviate business taxes, in an arguable patronage of businesses by the City [2].

→ The influence large businesses (interested stakeholders) is similar to the “distance decay” felt in Zanzibar, Tanzania, where the interest of the majority ethnic group have greater influence in governance and government [22]. This issue is also noticeable in Creston, British Columbia, with the practice of “regulatory capture” [23]. 2010 Olympic Podium: who wins and loses in the Olympic Village?

Upon consideration of the balance of power in the Olympic Village, and despite the efforts of Vancouverism, the marginalised community have been negatively impacted (by amendments to the mixed income residence plan) whereas the wealthy community of interested stakeholders has benefited in the negotiation stages, city planning amendments and Olympic Village legacy [8][14][19][24].

The promise of mixed income housing in the Olympic Village was lelt unfulfilled after the 2006 amendment of the Official Development Plan [14]. Since housing affordability remains a significant challenge for sustainability [3], a new amendment can be envisioned to reinstall the initial promise of affordable housing units. Speaking in the legal language of Official Development Plans, perhaps with lawsuits, may rectify the shortfall of affordable housing in Vancouver.

The City of Vancouver and the interested stakeholders of Vancouverism have benefited most from Olympic discussions, amendments and legacy [8][14]. In light of Calgary’s interest in hosting the 2026 Olympic Winter Games [25], the importance of dialogue with affected stakeholders is highlighted (particularly with marginalised stakeholders)[6][15]. Canadian Olympic events have learnt from their mistakes in cultural exploitation of First Nations [26], however, First Nations remain an example of marginalised communities in Vancouver[27]. Their grief is deeply-rooted in land rights; a solution may be found in unraveling the conflicting land claims [28] and elevating the voice to the level of a political institution in Canada.

Olympic Rings: under their banner, urban infrastructure is redesigned according to Vancouverism in the 2010 Winter Olympic Games.