The Evolution of the Uma’Jalan People's Cultivation Practices in East Kalimantan, Indonesia

This case study focuses on the Uma’Jalan peoples, in East Kalimantan, Indonesia. Towards the end of the twentieth century, there has been a shift in local tenure rights, with government-induced transmigrasi settlement leading to the fragmentation of one community into three separate communities. This loss of tenure and land rights has brought about a shift in the Uma’Jalan peoples’ livelihoods in multiple facets - economically, politically, and environmentally. Agriculturally, their cultivation practices have evolved from traditional swidden agriculture to the more modern process of irrigated –rice agriculture. Moreover, this shift has caused an evolution in local environmental practices, and highlights the communities’ adaptive capacity. Further, this brings about further inquiry into future adaptation, thus the developmental direction of new and more sustainable cultivation practices.

A map showing control of the island of Borneo

The Uma’Jalan peoples are indigenous to East Kalimantan, Indonesia, and part of approximately 40 sub-groups in Borneo, referred to as the “Kenyah”. Their lifestyles are heavily reliant on both timber and Non-Timber Forest Products (NTFPs) - rattan, honey, coconuts, and most importantly, rice – and their economy is largely centered around rice agriculture and agroforestry. [1]

East Kalimantan is a province is located in eastern Indonesia which boasts an abundance of natural resources, and supports a population of over 3.4 million inhabitants (2015) [2]. This area is home to a number of ethnic groups with varying adat communal lands, which are traditionally recognized by customary law. Adat is defined as a complex aggregation of rights and obligations pertaining to Indonesian history, land, and law; it is essentially the “formulation of an ideal society” [3].

This heavily forested area, located in the mountainous regions between East Kalimantan, Indonesia and Sarawak, Malaysia Gorlinski, V. K. (1994). Gongs among the Kenyah Uma jalan: Past and Present Position of an Instrumental Tradition. Yearbook for Traditional Music, 26, 81. doi:10.2307/768245 has experienced a historical shift in its population as a result of changing ideals and traditions, and further exacerbated by government-induced transmigrasi settlement. The following timeline explains the area’s initial settlement and subsequent development and progression [4]: 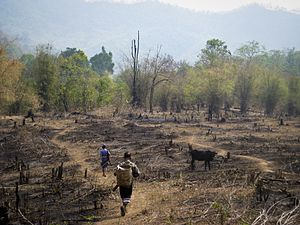 Traditionally, the Uma'Jalan practiced swidden (slash and burn) agriculture, and focussed on the cultivation of rice and cassava crops [5]. This form of agriculture begins by selecting an annual cropping site, and slashing the undergrowth, which are usually areas of old growth. Then, large timbers are cut down and allowed to dry - the duration of this period depends on a number of variables, including: age and size of cut vegetation, and exposure to the sun. Plant crops are planted in fragments/tiers: rice and subsidiary crops are planted first(corn, pumpkin, sugar cane, etc.), followed by cassava a few months after - so it does not shade out the rice. Following this, any necessary weeding is done. The rice matures within approximately 6 months, and is harvested using small hand-held knives [5]. While successful, swidden agriculture had many drawbacks, as it was fragile and resilient to environmental change [6]

In modern times, irrigated-rice agriculture is more commonly used, and has seemingly replaced traditional swidden agriculture [5]. This form of agriculture begins by selecting an area and proceeding to slash, fell, and burn any covering vegetation. The area is then levelled, and water-retaining dykes are added using wood and/or bamboo. Following this, rice crops are planted and uprooted at 30cm for transplanting. As seedlings mature, the water level is raised – ideally 30cm when rice grows to its maximum height, as this prevents weeds from growing. During harvest, each panicle of rice is cut separately, and post-harvest, the water is temporarily drained [5].

This change of cultivation was driven by a number of factors. Initially, the 1970's were a decade of environmental instability in East Kalimantan, and local villages suffered from long periods of drought and rat infestation - both ultimately leading to a change in agricultural practices [7]. As a result, more fields were cleared, the forest type shifted from old growth to mixed forest type, and one's diet shifted from rice to cassava, as a staple food. Additionally, technological advancement contributed to the evolution of cultivation practices - as this allowed for an increasingly efficient means of crop production [8] 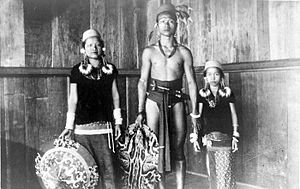 The first transmigration (transmigrasi) programs were initiated by the Dutch colonial government at the beginning of the twentieth century, as a means to divert population pressure from densely-populated cities into rural communities. The main goal of this initiative was to diffuse the social pressures faced by landless people, such as low food availability and poor economic growth, rather than concentrating it in one central area; ultimately, the government wanted to achieve an overall evenly-allocated population density. This mitigation attempt was aimed at poverty reduction in urban areas, and focused on the allocation of labour for agriculture, as settlers were given land and an opportunity for income and self-sustainability [9].

In terms of organization, the initial transmigration programs were government organized, and developed through a standardized procedure - using a pre-selected model with homogenous inputs – all community members are given the same houses on the same amount of land, with identical specified inputs for agriculture and sustenance – seeds, pesticides, family planning, and fish fry. Typically, this subsidy lasted for approximately one year [10].

The success of the early transmigration initiatives was largely stakeholder-dependent. The government reaped a number of benefits from this initiative, as agriculture and agroforestry in low-density areas began to rise, thus increasing both local and national economies. However, the transmigrant settlers did not reap as may benefits, as poor site planning was a result of decision making based on assumptions, rather than experience. As a result, the soil in communal areas was not fertile, and settlers were poorly educated in agricultural techniques and given little instruction on land cultivation [11]. This lead to widespread environmental damage, caused by the further deforestation of old-growth forests and high levels of overharvesting, and eventually lead to accelerated natural resource depletion. Moreover, the encouragement of one central national identity lead to the dissolution of regional culture and identities of indigenous people. This forced the “Java” way of life onto settlers – in terms of agricultural methods and practices, and rural institutions. Consequently, while the transmigrasi projects were designed to guarantee a fair distribution of government aid, they proved to be largely unsuccessful, as settlers would often leave their respective settlements once the subsidy’s one year duration was over [10].

The Uma’Jalan peoples’ hold customary rights to this land, as they are not in possession of any physical agreements or treaties. Rather, territorial ownership is geographically displayed on mountain ranges, rock faces, and rivers - within these areas, outsiders must obtain permission for entry and resource use [12].

Over the past century, there has been a shift in the framework regarding land tenure – complex, traditional tenure systems were replaced by the more simplified Dutch framework [12]. Under the Basic Forestry Law (No. 5/1967), the state was given authority to divide forest areas into several land use categories with different policy objectives, such as timber production and forest land conversion. However, this law was reformed in 1999, to recognize community management and land use. While indigenous communities were able to use and management forested land under state law, they are were not granted ownership of any land – thus, the Indonesian government recognizes these indigenous communities’ customary rights in principle, but not in practice [12].

Article 5 of the reformed Basic Forestry Law (1999) states that community rights will only be recognized by the Indonesian government if the following criteria are met [12] :

In terms of local commons, the Kenyah use the following criteria to evaluate its sociocultural function [6]:

In terms of participatory forest management approaches, it is integral to evaluate both ecological and socio-cultural function of the commons – in order to come up with a viable means of forest management. There are three main variations of participation [6]: the first is defined as a participatory top-down approach, where residents are seen wage labourers volunteers, and fund providers. This approach is seen as nominal, and highly unsuccessful when put in practice - thus, it should be avoided in all cases. Additionally, professional-guided participatory approach is seen as a “flexible blueprint approach”, where both residents and professional planners are involved, and modification is achieved through open discussion and workshops. This approach is used when systems do not have a significant socio-cultural function of the commons. Further, the endogenous bottom-up approach is viewed as a “learning process approach”, where professionals act as facilitators. This is seen as the best possible application, and is used when systems have a significant socio-cultural function of the commons – as residents are able to self-manage their resources sufficiently [6] .

Social forestry programs located on production forests are controlled by private companies that hold tenure rights to these forests [6]. Local people are often seen as labourers, and do not have rights to land or resource use. While logging companies are obliged to contribute to the community through the building of roads, schools, churches, and the cultivation of plant fast-growing species, they have not allowed the community to be involved in the participation of forest management. This method of administrative agreement is an example of a participatory top-down approach. On the other hand, community forest programs are largely controlled by the federal government [6]. With the implementation of the Community Forest Program, forest communities have been granted a community forest concession on production forests, protection forests, and conservation areas, lasting 35 years. In this case, the method of administrative agreement is an example of a flexible blueprint approach.

The transmigrasi settlement initiative was developed in order to divert population pressure from densely-populated cities into rural communities [9]. The main goal of this initiative was to diffuse the social pressures on landless people, such as low food availability and poor economic growth, rather than concentrating it in one central area; ultimately, the government wanted to achieve an overall evenly-allocated population density. This mitigation attempt aimed at poverty reduction in urban areas, and focused on the allocation of labour for agriculture, as settlers were given land and an opportunity for income and self-sustainability [10].

The Uma'Jalan community has experienced a transformation in their way of life, agriculturally, environmentally, and socially. The shift in agricultural practices from swidden agriculture to irrigated-rice agriculture has proved to be more efficient, due to its implementation of new forms of technology and increasing resilience to climate change [5]. As well, the community has improved its relations with outside groups, as seen by the implementation of air and water transport, paired with increased communication and trading from outside groups. Morover, this program initiated the beginning of the relationship between the Uma’Jalan communities and the federal Indonesian government, this allowing for increased communication and planning between two main stakeholders [9].

The government-induced transmigrasi settlement into the East Kalimantan area failed to acknowledge any customary rights held by the Uma'Jalan communities. The issue of the security of land tenure comes into question, as the Uma’Jalan communities’ land and resource tenure is uncertain. Additionally, this is caused by a hierarchal conflict of power, as weaker groups more likely to submit to claims made by higher-up groups, and parties with connections to the elite and government officials may reap unfair benefits [13]. Moreover, the issue of boundary disputes is a source of conflict between communities, and may lead to inter-village hostility [14]. This further highlights the importance of government approved community mapping, in order to explicitly present land rights boundaries among communities.

Indonesia is still one of the only countries in Asia that does not have any national policies involving community access to state forests [15]. The lack of acknowledgement regarding customary tenure and respected indigenous land rights is largely problematic, and facilitates for poor community forestry management initiatives and frameworks in future proceedings.

I believe that a number of changes and solutions can be implemented, in order to better the Uma'Jalan peoples' way of life and strengthen indigenous-government relations: