This case study mainly analyzes the potato industry in Prince Edward Island, Canada. Based on the two parts to describe the relationship between government and local farms. The first part is potato wart disease in PEI. Potato is the one of the main products export in another country such as American and China. Between 1989 to 2000, there is potato wart disease in PEI; US government even ban on PEI potato. It directly affects the economy, and farmers live in PEI. In this case study, the American’s companies are the interested stakeholder, and the local farmers in PEI are the affected stakeholder. One of the goals of this case study is to talk about how the government cooperate and help farmers to deal with the problem. Then, a conflict between potato industry and sustainable environment is the other part of the case study. Due to increase the land use of potato and overuse the chemicals and fertilizers in the production, which causes the pollution of PEI's watercourses. There are many negative influences such as increase the risk of potato wart disease and change the distribution of flora and fauna in the streams in PEI. To achieve sustainability for the environment and potato resource, the state makes some policy such as crop rotation to governance the potato industry in PEI. 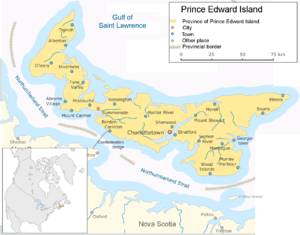 Prince Edward Island(PEI) is the smallest province in the Canada. In the website of PEI, it comprehensive describe the PEI’s geographic information. PEI “Located off the eastern coast of Canada and belongs to a group of provinces known as the Maritimes (that is Prince Edward Island, New Brunswick, and Nova Scotia). It is also considered part of Atlantic Canada, which includes the three Maritime provinces listed above as well as Newfoundland and Labrador” [1]. PEI was the British colonies. In the mid 18 centuries, there was a Seven Years’s War in the European. In 1763, when a war between Great Britain and France ended, PEI belong to the British based on the Treaty of Paris. The island was named “St. John’s Island”. Then, in 1798, the island was renamed to the “Prince Edward Island.” In 1873, PEI became one of the Canadian provinces. The main traditional industries in PEI are agriculture, fisheries, and tourism. A journal pointed that “Farming in Prince Edward Island first began when French settlers planted grain crops around 1720. Since then, agriculture has grown into an important economic industry with 2016 seeing $487.0 million in farm cash receipts” [2]. What is more, lobster is the major production for fisheries and potato industry is the significant part of agriculture in PEI.

In 1758, it was the first time which PEI introduced potatoes when the British took over from the French.[3] In 1805, statistics showed that “out of 10,000 acres of farmland on PEI, 15% was devoted to potatoes”. [3] After the 1840s, the potato industry became the famous in the world.[3] There was a severe potato blight between 1845 and 1851, but the problem was solved. [3] In the 1920s, the acreage which plant potato almost doubled, the yields tripling and there were two new types of potato (the Irish Cobbler variety and the Green Mountain variety) which were introduced in PEI.[3] In 1989, there was a disease which called the Potato Virus Y Necrosis (PVYn) in PEI, PVYn causes the US closed the international border to the PEI potatoes for two years. [4] It brings a serious hit to the potato industry.

In PEI, there is the crown land. To protect and manage the land, the provincial government of PEI established some acts. In 1982, an act which called “P.E.I Land Protection Act” was proclaimed. The act mainly defines the “individuals are restricted to 1000 acres, and no corporation is allowed to own land in excess of 3000 acres. In the case of non-resident ownership of land, approval from the Executive Council is required on a shore-frontage lot in excess of five chains (330 feet) and any land in excess of ten acres in area”. [5] However, the provincial government has the different requirement for the non-residents because of protecting the island’s land ownership. The Real Property Act of 1969 is directly applied for the non-residents. The act shows “Nonresidents can purchase up to ten acres without the approval of the Council. If they want to purchase more than that, they would have to get the necessary approval from the Council”. [5] In other words, the Real Property Act not only limit the number of non-residents own the land but also protect the benefits of residents in PEI.

For the potato industry in PEI, there is no freehold and farmers need the license to plant the potato. The Prince Edward Island Board control the PEI potato market, and they also have rights to give farmers license. The Prince Edward Island Board total included 12 members, and they are elected, and board member shall serve three-year terms. The Natural Products Marketing Act, Potato Marketing Plan Regulations mainly talk about the responsibility of the PEI Board. For example, PEI board have the power to control and regulation of the quality of potatoes in PEI. [6]

Affected stakeholders can be any person, group of person or entity that is likely to be subject to the effects of the activities in a locally important forest area. In this case study, the main affected stakeholder is the local potato farmers. The potato farmers are the backbone of the potato industry in PEI. They are also a group of people which have low power in the potato industry. The farmers do not have decision-making rights. However, the potato farmers have right to sell the seed when they bred the new type of potato and applied for the patent. [7] The main objective for the local farmers are to keep their profit, and they are highly attentive to the information about potato industry because it will directly affect their lives.

The other affected stakeholder is the Prince Edward Island Board because the producers control the board. The Natural Products Marketing Act, Potato Marketing Plan Regulations pointed “The Board shall consist of 12 members, all of whom must be registered producers, and of the 12 members, four shall be seed producers, four shall be tablestock producers and four shall be processing producers”. [6] Those members are elected by residents which live in the different district. The PEI board have high power because they have right to give the license to farmers. Their responsibility is to ensure the sustainable development of potato industry in the long term.

Interested stakeholders are any person, group of person or entity that has shown an interest or is known to have an interest in the activities in a forest area. In this case study, US companies are the interested stakeholders because they only care the quality of the PEI’s potato. The role of US companies is to provide more opportunity for the PEI potato industry. Those companies do not have high power, but they can bring the significant impact on the potato industry. For example, when potato wart disease happened in 1989, US companies started to choose another place’s potato. A journey shows that “Farm cash receipts for potatoes in the final quarter of 2000 were at an eight-year low - $15 million less than the same period in 1999. If the ban continues until July, APEC estimates that the loss of receipts for the industry could be equivalent to between 1% and 1.5% of provincial GDP”. [8]

The provincial government is the other interested stakeholder. The PEI government hold a very high power and their main relevant objective is to enhance economic performance for all industry. When potato wart disease happened, the government uses their power to help local potato farmers to deal with the disease. There is a report shows that “the P.E.I. Government began a $15 million diversion program which pays farmers five cents a pound to remove 10 per cent of potatoes from their warehouses to compost or spread on fields. Some potatoes will be given to food banks across Canada”. [9]

Potato industry in the one of the most important traditional industry in PEI. In Statistics Canada, it pointed that PEI is the 24.2% of all provincial distribution of potato area in 2016. [10] So, PEI has the most abundant potato crop in Canada. However, grow the potato has the negative influence for the environmental especially the quality of water. The primary reason is the farmer over-use the chemicals and fertilizers in the production, and it causes the massive amount of pollution in the watercourse. A report summarizing the major problem which is caused by potato. “In surface water, excessive nitrogen and phosphorus levels from agricultural production are assumed to cause three major pollution problems: 1) enrichment of an ecosystem with chemical nutrients; 2) a change in the composition and distribution of flora and fauna in the streams; and 3) health hazards due to the contamination of wells and other sources of drinking water”. [11] Based on those problems, the intentions of PEI government decrease the negative influence of potato production on water quality and achieve the sustainable environment in the potato industry. Crop rotation is the solution which alternate plant potato and other crop and it is the effective way which can reduce the need for pesticides and improve soil fertility. A journey provides four optimal models for crop rotation which is Continuous potatoes, Two crop rotation: potato and grain, Two crop rotation: potato and forage, and Two crop rotation: potato and forage. [11] In 1997, the provincial government of PEI set up a commission to solve the pollution of the watercourse. This commission has a report called the Round Table on Resources Land Use and Stewardship which simply called Round Table. Round Table includes two parts which “1. The establishment of buffer zones between cultivated agriculture and watercourses; these buffer zones are intended to mitigate pollutant runoff from intensive agriculture into PEI watercourses. Potato producers are offered compensation in the form of subsidies for instituting buffer zones; 2. A mandatory three-year crop rotation for potato producers”. [12] In 2002, the provincial government enacted the PEI Agricultural Crop Rotation Act (ACR) to protect the water quality. ACR stated, “only regulated crops could be grown on farmlands, each for no more than once in three years”. [12] Although to use the crops rotation can solve the environmental problems and improve the quality of potato, many farmers not be willing to do crops rotation. The main reason is the crops rotation lead the decrease of the total potato production capacity for a year. In other words, farmers will have the loss when they use the crops rotation; it will cause there is not a good cooperation between farmer and PEI government.

The provincial government of PEI might consider a particular commission which to monitor the potato farmers and make sure they observe the PEI Agricultural Corp Rotation Act. The commission can be composed of residents and national staff. It will not only effectively monitor the farmers but also can protect the farmer's rights. The responsibility of the commission is to publicize the advantage of the crop rotation and help farmers to change their planting model which achieve the sustainability of the environment.

The PEI government might consider setting up a complete welfare policy. For example, if farmers comply with the PEI Agricultural Corp Rotation Act and other requirements, the government will fund subsidies for farmers every quarter or year. What is more, farmers will get a different number of grants based on their total potato production capacity every year. Then farmers who have severe losses will get extra subsidies and technical support when they start to use the crop rotation. A complete welfare can attract farmers comply with ACR and reduce complaints.