An orthography refers to the writing system in which a language is represented. A language script provides instructions to follow when reading, writing and pronouncing any given language. Some scripts facilitate documentation better than others depending on the sounds and linguistic structures they are able to accommodate. Some languages have multiple scripts, meaning that they can be visually represented in different ways, but still articulate identical information. Phonemes are aspects of a script that be both heard and pronounced, but not visually represented while Graphemes are visual representations of a script that can be both heard and pronounced. The first image on the right represents hieroglyphs, a writing system introduced by ancient Egypt which uses characters to represent a single word.

In some instances, different scripts exist to represent the same language. This phenomenon is described as Digraphia. The second image on the right illustrates a situation in which different scripts are used to communicate the same meaning. In contrast to Digraphia, Exographia, describes the instances in which only one writing system exists to represent a language. In multi-lingual communities, different languages are used by different communities, however, the official language(s) is what is used for all formal matters. Official languages must therefore have both a written and oral form.[1] For this reason, written languages are often perceived to be superior to oral languages. 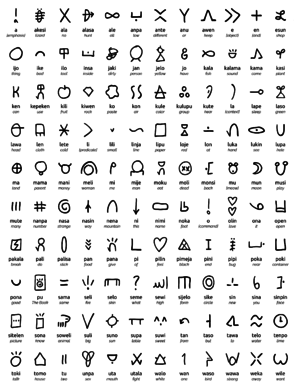 Example of Orthographic Script with Characters

Orthographies are developed for both documentation and revitalization projects. Establishing a writing system is generally used for re-integrating endangered languages in affected communities. While establishing orthographies has the ability to mobilize endangered languages, the process of implementation is costly. If an orthography is to serve an endangered language community, there must be education in place to teach community members to both read and speak the language. At the most basic level, a language system requires the use of writing materials and/or technological resources that illustrate a typed form. As a oral languages evolve to also have a written form, community members actively participate in the transition process to ensure orthographies are not only facilitating documentation, but also, revitalization.

While the development of an orthography is a practical strategy of facilitating language documentation, other strategies such as audio and video recordings can also be used. When deciding an approach towards endangered language projects, it is often helpful to consider the community's long-term goals in order to select the most effective strategy.

By developing an orthography for oral languages, community members are given the opportunity to use traditional languages in formal situations. Literacy can also be integrated into an education system, thus familiarizing younger generations with their traditional languages. A writing system has the ability to preserve an endangered language by promoting its widespread use throughout a community.[3]

Orthographies are not implemented for the purpose of research, but rather to uphold tradition in communities. Traditionally, linguists work alongside a community to establish a system best suited to their unique needs. By incorporating community members into the development process, endangered language speakers have the opportunity to choose the ways in which their language is represented. [4]

There is no universal orthography that can accommodate all languages, which is why there is so much variety between scripts. Establishing orthographies for languages that have previously only had an oral form requires active community engagement, as well as thoughtful considerations by project coordinators. This is because orthographies are not just tools used to preserve endangered languages, as their implementation have both political and social implications on communities. Writing systems do not guarantee the security of endangered languages because its use depends on the literacy of its community, and these literacy programs must be maintained on order to have long term effects.