Canada as a Post-National State with "No Core Identity" 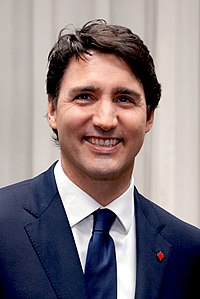 As quoted in a 2015 New York Times article, Prime Minister Justin Trudeau tells the journalist Guy Lawson that "[t]here is no core identity, no mainstream in Canada." This claim is followed by a statement of what the Prime Minister thinks are core values that all Canadians share: "openness, respect, compassion, willingness to work hard, to be there for each other, to search for equality and justice." According to Trudeau, these qualities are what makes Canada the world's first post-national state.[1]

The Prime Minister's claims addresses unresolved questions about the Canadian identity — who are the Canadians, what do they stand for, what are the core values. His conclusion of a post-national state is left to interpretation. However, because of his comments that describe Canada as lacking in a core-identity, it is possible that a post-national state in the eyes of Prime Minister Justin Trudeau is likely to be indicative of a perspective that is committed to being inclusive.[3] As Michael McDonald is quoted in a Vancouver Sun article, he speculates that the Prime Minister's belief is stemming from a concern that holds caution over potentially affirming "a dominant culture that suppresses and marginalizes those outside of the mainstream."[4] In this way, a post-national state can be understood as one where it continuously moves away from Canada's French and British colonial contributions, in favour of institutions that acknowledge and value immigration and the diversity that it produces.

In terms of immigration, would a post-national state mean that it would grant assess to anyone from any country? It would be unlikely that this would be the case, as Canada needs the state governance and control simply for national security purposes.[3]

After winning the 2002 Booker Prize for fiction, Yann Martel, a Spanish-Canadian novelist, infamously described Canada as "the greatest hotel on earth." This metaphor of Canada for various people across the political spectrum poses as an analogy that meant newcomers would view Canada with a sense of transiency.[3][5] It is a place where newcomers could stay with no lasting responsibilities attached. This formulation of Canada is dangerous for many citizens of Canada especially as concerns of cities being occupied by transnational wealth continues to grow.[4] On the other hand, Martel's metaphor might be one that is reflective of the changing notions and ideas of what the essence of Canada is and should be. Rudyard Griffiths, in his book "Who We Are: A Citizen's Manifesto", writes that the "exceptionalism of Canada — what allows us to be simultaneously one of the world's most diverse and harmonious societies — is the indeterminate nature of our national identity."[5] The reoccurring theme here is that Canada's cultural diversity is once again, seen as a strength and a source of prosperity. The difference between Griffiths and Trudeau's assertion of Canada's national identity, is that Griffiths views the cultural diversity as an element that lends itself to Canada's identity, while the current Prime Minister seems to interpret the cultural diversity that exists in Canada as something that is perhaps, not homogenous.

Is a Collective Sense of Belonging No Longer Desired?

In June of 1971, Canada adopted multiculturalism as a formal national policy under Pierre Trudeau's government. In the Canadian Multiculturalism Act of 1988, it ensured that "all individuals [will] receive equal treatment and equal protection under the law, while respecting and valuing their diversity."[6] This line in the multiculturalism policy is one of many that illustrates a mediation of the fissure felt between populations who were discriminated against and Canada as a white settler society. In this way, multiculturalism might be understood as a device for producing and neutralizing threats to a singular Canadian national unity[7] While multiculturalism does not erase the historical suffering that many groups and communities faced, it does serve as a way to invite people of colour to see themselves as belonging to the nation.

For the current Prime Minister to contend that Canada has no core identity, it risks the implication of Canada's history, traditions, and principles as not having a fundamental role in defining who the people are. In this way, the Prime Minister's conceptualization of a post-national state seems to go against a collective sense of belonging.[8] In addition, part of Canada's history includes being a settler state. The genocidal desire to eliminate the Indigenous peoples makes up a substantial part of Canadian history through policies of direct extermination, displacement or assimilation. The Indigenous peoples' sense of belonging to the land is already such a contrived issue. In saying that Canada has no core identity, it risks erasure of the history that discriminated against their people and it also diminishes the consequences of immigration on the Indigenous communities. Immigrants are essentially settlers who also participate in the dispossession of Indigenous lands[9]

If Trudeau's definition of Canada as a post-national state focuses solely on celebrating diversity and welcoming newcomers without notions of integration, there is a possibility that diversity will turn Canada into fragmented pockets of ethnic enclaves. Whether or not the Prime Minister thinks that this is desirable is not clear, but could a postnational state practically be in Canada's future?