By the end of this workshop and upon further reflection, students will...

How do the principles of professional accountability and advocacy apply to online spaces? 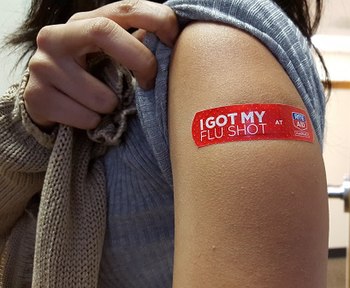 Devon is a graduate of the UBC Doctor of Pharmacy (PharmD) Program. During his time at the Program, he was a top student, actively involved in the UBC Pharmacy Undergraduate Society. Within two years after graduation, and after passing his Pharmacy Examining Board of Canada Qualifying Examination and completing a Pharmacy Practice Residency Program, Devon landed his dream job as a pharmacist at "General Care Hospital" (GCH).

Devon has been working at GCH for 6 months, and has thrived in this fast-paced environment. Devon especially enjoys having the opportunity to collaborate inter-professionally with physicians, nurses, physiotherapists, social workers, and the rest of the patient care team.

Per GCH requirements, with peak flu season approaching, all patients and visitors must receive the flu shot before December 1st, or wear a face mask before entering the facilities. Healthcare providers at GCH have been asked to verify with hospital visitors that they have received the flu shot prior to entering any patient care areas.

Devon is completing rounds with Ryan, a physiotherapist he was worked with a few times before. While stopped outside the room of an immunocompromised patient, Devon asks Ryan to verify that her two visitors have been vaccinated with the flu shot.

Ryan appears hesitant. When Devon inquires further, Ryan tells Devon that he is skeptical about vaccines due to concerns about autism, and that he himself used to get the flu shot yet "still got sick every year.” As a result, Ryan does not feel comfortable discussing the subject with patients nor being an ambassador for the flu vaccination program.

Devon is shocked to learn of Ryan’s stance on the issue, and is inclined to argue with Ryan about this misinformation. Before approaching Ryan, Devon is approached by a physician asking about a different patient. Due to the heavy workload that day, Devon does not get the opportunity to discuss the matter with Ryan before the end of his shift.

In the days following, Devon cannot stop thinking about his interaction with Ryan. He feels shocked that a healthcare professional working in an acute care setting could hold such a misinformed and negative view about vaccines, especially after all that has happened with COVID. Finally, after a few days of considering his role as a healthcare provider, and professional obligation to share evidenced-based information, Devon decides to take action. Devon goes on his personal Facebook account to post about the incident. His current privacy settings ensure that his status can only be viewed by those on his Friend List. He shares the following exposition about the importance of vaccines: The post immediately receives several “likes,” as well as “angry” and “sad” reactions from healthcare providers and non-experts on Devon’s Friend List. Many also begin to add comments to the post. Some comments merely express shock (many “wows,” and “I can’t believe this!”), while others make more inflammatory statements (including “what an idiot,” and “this physiotherapist should be fired!”).

Devon feels immediate vindication at the swift response to his post. One of the commenters, Devon's former UBC Pharmacy classmate, Stephanie, shares it on her own Facebook page. Devon believes that it is his responsibility to call out such beliefs as Ryan's, and feels pleased that Stephanie is helping to spread the word. Devon deletes all of the inflammatory comments made on his own page beneath the post.

A Facebook friend of Stephanie named Ali - who happens to be a personal friend of Ryan's - sees the post on Stephanie's Facebook page. Ali is curious about where the incident took place, and decides to look up Devon on LinkedIn to see where he works.

Ali sees that Devon works at GCH. Knowing that Ryan is a physiotherapist at GCH, he sends the post to Ryan on Facebook Messenger along with the following message: “Is this about you, LOL?”

Realizing that the post is about him, Ryan immediately feels angry and defensive both at Devon, for sharing the experience online, and at the inflammatory statements directed at him made by the commenters on Stephanie's profile.

The next day at work, Ryan displays cold, and passive aggressive behaviour towards Devon throughout the day, making comments like “I better not say anything or it might end up online.”

Devon suspects that Ryan has seen his Facebook post. However, Devon is adamant that it is his duty to advocate for public health, and is pleased that Ryan was “put on blast” for his views online. He decides not to discuss the issue with Ryan.

Devon begins to question what might happen to him as a result of his conflict with Ryan. In particular, he is worried that the standoffishness between them will happen every time they work together, and how this tension may impact his reputation at GCH.