Community-based marine conservation in the Philippines.

The coastal zones in the Philippines are extremely biodiverse and fragile regions. Due to their exceptional and uncommon composition these zones often experience exploitation of their resources, this calls for the need of effective protection of these areas. In order to address these issues, marine protected areas, scientific monitoring, conservation education, and other efforts have been executed in these costal zones [1]. 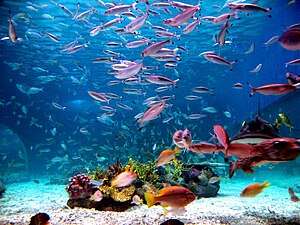 An aspect of marine protected areas that is important to consider is the effect of access to resources for indigenous in the Philippines. [5]The majority of marine protected areas are along coastlines where the locals are dependent on provided assets.[6] Due to an unfortunately consistent pattern of poor planning and mismanagement of these protected areas, there has been a decline in support from locals. [6]Often suggesting that there is more harm economically than benefit environmentally once MPAs are implemented.[7] A large source of food and income are from fish and other marine life. When protected areas are implemented along reefs access to such commodities becomes increasingly difficult. On the other hand, protected areas have opened up a new sector of income in dive tourism.[7] Local governments have attempted to push the positive aspect of MPA by suggesting an alternative economic growth in the tourism sector for indigenous.[6] With marine protected areas being implemented indigenous have new opportunities for businesses that were previously found in the fishing industry. [6]Diving and snorkeling ecotours allow for protected areas to be implemented without the fear of declining wages. [7]As well, locals who partake in the monitoring of MPAs are given an opportunity to contribute towards sustainability efforts that are acknowledged by conservation organizations world wide.

A large influence on MPA is the evolution of governance from central to local municipals. With this change came a larger push for more protected areas from NGO’s, conservation organizations, and research institutions.[8] With an increase in protected areas, there is a greater supply of funds to the government as the coral reefs annually contribute $1.35 billion to the economy.[9] Governments are more likely to oblige to adding marine protected areas in order to gain recognition, world wide, for their conservation efforts.[9]

A funding group would be a person or organization that has investment or interest, in this case, with marine protected areas. [10]Funding groups are able to have influence and implement altercations to MPAs from the initiation. [11] Involvement from the beginning of coordinating and creating marine protected areas allow for universal understanding of why the execution of a MPA is occurring.[11]As well, funding groups allow for local issues to be considered and involved in decision making progresses. Local funding groups have been shown to increase in management and implementation of rules.[12] As well, funding groups can act as a bridge between local communities and the government involved in creating MPAs. [13]With funding groups come the issue of over analysis of cost benefits in MPA without recognizing inequalities.[13]

Effectiveness of Community Based Conservation in the Philippines

Coastal zones in the Philippines are extremely biodiverse and therefore often experience exploitation of their resources, resulting in the need for effective protection. In order to address these issues, marine protection areas, scientific monitoring, conservation education, and other efforts have been executed in coastal zones.[14] The Philippines leads one of the biggest movements of community based coastal zone management in South-East Asia. However, these efforts are often lead by external groups and once their intervention ceases the projects fail, indicating that overall most efforts are unsustainable. In 1997 a case study revealed that only 19% of marine protected areas were given the "sustained" rating, however a more recent study indicated that 44.2% of the MPAs have good to excellent management[15]. This increase in effectiveness signals hope for community based conservation, however there is still room for improvement. In order to identify the areas that still need improvement it can be beneficial to review the strengths and weaknesses of community based projects.

The evidence for the problem

Local fishery census showed that MPA protected 10% of the total reef fishing area around the islands. [16] Biomass of fish such as surgeonfish and jack, which make up 40-75% of fishery yields, were much greater outside of the MPA boundary.[16] This biomass continued to increase the farther from the reserve, moving from 200m-500m. [16] As well, fishery yield of these fish were greater post implementation of the MPA than previous. The execution of the MPA resulted in larger yield, increased catch rate, and a reduced effort in order to catch. [16]

The implementation of MPAs has resulted in an increase of tourism, which can have beneficial outcomes for the MPA itself, but can often time lead to negative impacts on the indigenous. [16] Often times local fisheries feel as though the elite tourists are controlling the MPAs instead of a collaborative effort between locals and the government. [16]

Networks of Marine Protected Areas form joint relationships and partnerships between people and institutions. Consequently, there comes a flow of communication networks around information, resources, and responsibilities[17]. This offers strong autonomy to local communities and may reduce employment for local residents[17]. However, there are many financial qualms with MPA networks. In communities which have a strong reliance on natural resources find it difficult to implement MPAs because of insufficient funds to support responsibilities such as patrolling and monitoring[17]. Even so, local governments often claim they have insufficient funds- because internal revenue allotments from the national governments are lacking- and as a result MPAs managed by local communities have inconsistent and scarce funding because of their fiscal dependence on local governments[17]. As a result, there is a need for remedial actions such as changes in policy that take into “input variables that produce effective MPAs and proposing solutions" as suggested by Bennett and Dearden[18].

In theory, MPAs are effective and beneficial for a wide variety of not only ecological but also socio-economic factors. However when in practice, only ~1-7% are considered protected or exclusive economic zones[18]. From the small percentage which is protected, even less are considered "no take zones", and from that, even less are effectively managed[18]. For this reason, policy changes are a viable solution to the problematic relationship between MPAs and the communities of the Philippines. Bennett and Dearden propose that in order to successfully achieve desirable outcomes for any marine protected area, one must be attentive to "three categories of inputs: governance, management and local development"[18] .Inherent feedbacks are present between governance, management, and development when looking to achieve beneficial outcomes in MPAs [18]. Governance provides structure and framework for management and governance provides a supportive policy environment for development[18]. Management monitors, evaluates and provides feedback to governance and management offers the required environmental sustainability and long term support to development [18]. This is important to consider when acknowledging that managers often lack accountability and often don’t have the background and knowledge to work in development initiatives. Development contributes to effectiveness and sustainability of governance and development provides the finances needed for management[18]. Solutions to the socio-economic impacts of MPAs may only come through effective management and development strategies implemented by governance. For example, there are higher socio-economic benefits when there is strict management and extensive enforcement aimed to reduce illegal and injurious fishing practices which in in effect improves habitat quality and reduces fishing mortality .

Problems among the local communities involved with MPA's mostly result from heterogeneity between communities. Differences in culture and societal structure make it difficult for groups to combine their conservation efforts and resolve disputes. Lowry et al. argues that the basis of resource governance in community-based conservation includes shared interests among communities, but in real life, even small communities are rarely homogenous in this way. One recommendation to fix this issue is to increase communications between communities by building networks of databases tracking each group's efforts in their territories. This is difficult for indigenous groups to do without proper government infrastructure, and the Filipino government will play a large role in creating these networks for communication. Indigenous groups can fulfill their role simply by supporting government efforts to combine groups' individual MPAs into networks in order to improve conflict resolution and environmental benefits[19].

The institutional aspects of MPA's are vital for the regulation and monitoring of resource use in the Philippines. One problem conservationists run into when trying to expand MPA's into networks is a disparity in institutional and legal processes between communities. Lowry et al. suggests that government needs to be involved in MPA planning and management at the local level as well as the national level in order to best integrate existing MPA's into networks. National consolidation of aims and policies for these MPA's could also be an effective course of action for the government in order to form social networks between MPA managers and other environmentalists which would allow them to share concerns and successes in their management.

MPA expansion in the Philippines is also hindered by an inability to gather the data necessary to plan an effective network. The Philippine government can facilitate better monitoring and data collection from these areas by redirecting funds towards scientific expertise and technology. The national government can also help with data organization by providing a national database to link collected data from MPA's around the country, which will increase the effectiveness of national programs supporting MPA's such as the Protected Area and Wildlife Bureau of DENR as well.

Much of the difficulties of managing MPA's come from a lack of necessary government funding, which the Philippine government is also susceptible to. Local governments get funding for MPA management from the Integrated Protected Areas Fund and their regular Internal Revenue Allotments from the national government, but that is usually not enough. They supplement funds by collecting user fees or allowing a private sector buy-in from other people concerned about protecting these areas.

Finally, Lowry et al, suggests that areas with socially and economically beneficial fisheries are much more likely to be well managed, and improvement of local fisheries can demonstrate the benefits of working at a network scale. Therefore, the government can influence the effectiveness of MPA's by improving the economically beneficial elements of the area. This provides jobs for the local community and an extra source of income for the area as well.[19]

As marine areas in the Philippines face increasing environmental degradation, action must be taken in order to preserve these fragile ecosystems. Not only are these areas extremely biodiverse, but local communities heavily rely on the resources and cultural values to support their way of life. In order to address this increasing threat to marine systems, marine protected areas have been implemented in the Philippines in order to increase biodiversity of the coral reefs and surrounding ecosystems. However, these projects have not filled their potential due to a lack of funding and proper support. With increased government support there would most likely be an increase in the success rate of marine protected areas in the Philippines. In addition to a lack of funding it would be beneficial to improve communications within the marine protected areas to improve the approval ratings from the communities involved in the protected area.

With an increased education of the community as to what the implementation of a MPA looks like and their role in maintaining a well functioning protected area, the success rates could continue to increase. Stakeholders and governmental employees need to enforce management and restrictions of the policies and recourses that the public have access to. With increased monitoring and data collection the expansion of MPAs in the Philippines could be a higher possibility. As well as an increase in job opportunities outside of the fishery sector to allow proper regrowth and management of the resources.

If local government, NGOs, and stakeholders could allow for easier access to information and education for locals on the implementation of MPAs there is a likely hood of higher success rates. As well, an increase in management offers the potential for larger and more effective protected areas to be conducted in the Philippines.