The Quinault Nations used to reside on the Pacific Coastline of Washington, USA with full sovereignty over their traditional lands and their people. On the Quinault River on July 1, 1855, and Olympia on January 1, 1856, the Quinault Nations entered into a deal with the United States government, trading their land for a sum of money and a land reserve. Currently, the Quinault people still reside on that reserve, and engage in various activities, such as sustainable fishing, and managing a resort/casino. Actions are currently being taken in the restoration of their culture, primarily revolving around teaching their language, not only to their younger generations, but also to various scholars and other academics. 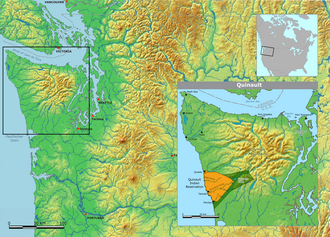 Map displaying the location of the Quinault Reserve. Credit to Nikater for the image.

The Quinault Nation consists of both of the Quinault and the Queet tribes, in addition to the descendants of the Quileute, Hoh, Chehalis, Chinook, and Cowlitz tribes (Quinault Indian Nation 2003). The tribes share a similar culture and history, and were linked together by the Signing of Quinault Treaty in 1856. In the community, though English was commonly used, tribal elders sometimes speak Quileute, Cowlitz, and Chinook languages.

Today, The Quinault Indian Nation are located in a Reserve in northwestern Grays Harbor County, along Washington State's coast, USA. The reservation is 208,150 acres and contains large area of magnificent forest, mighty rivers, lakes, and abundant biodiversity. It has 23 miles of coastline.

At the mouth of Quinault River, the heart of Quinault Nation, Taholah is located, which was once the largest settlement named, kwi’nail, from which the name Quinault originated from. The Quinault economics rely much on the rich natural resources within the reservation. Quinault, Queets and Raft were the three largest rivers in the reserve. The hydrological and biological resources enable Quinault people to produce seafood product and market their own enterprise: The Quinault Pride Seafood.

Currently, the Quinault Nation utilizes the abundance of natural resources to make a living. Harvesting seafood in a sustainable manner and selling it to an international market have allowed the Quinault Nation to generate a sizable income, even through a period where other seafood resources dwindled (Quinault Indian Tribe 2006). The Quinault Nation has also constructed a Resort Casino, using their own money as collateral (Monsarrat 1999), which has generated both money for their people, and attention for their status. While their financial details are not available, they seem to be doing relatively well (Quinault Beach Resort 2019).

The Quinault reservation wasn’t originally homeland for the tribes. 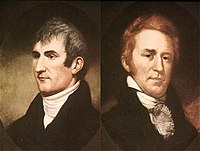 Before the formation of reservation, the tribes lived separately and were neighbored with each other. The Quinault, at that time, flourished with hunting, fishing, wood gathering. Quinault people called themselves people of the cedar tree. Quinault people were famous for crafting canoes. They were typically fond of building an immense cedar canoe, as recorded by Lewis and Clark in their famed expedition book, quoted:

On July, 1775, as Quinault people visited Spanish in their cedar canoe, western influence began to flood into these areas. The whites settled down for tapping the natural resources. Initially Quinault people were friendly but then conflicts were generated as more radical westerners arrived.

In the 1820s, as whites became more and more greedy and eager for more lands, Isaac Stevens, the Washington territorial governor, drew up a treaty for tribes to sign, claiming that Indians would  cede almost all their homeland, for a migration to a reservation land. The Indian leaders initially rejected because they considered the land chosen for reservation was too poor.

On January,1856, Issac Stevens redrew a new treaty that was finally inked. This Treaty is known as Quinault River treaty. The treaty established a reservation of 10,000-acre around Taholah, which, later today become the heart of this reservation. The intention of this treaty was to concentrate different tribes onto a special area. With addition of many other tribes, the reservation expanded, to the boundaries of present-day reservation.

On July 1, 1855, on the Quinault River, and January 1, 1856, at Olympia, the Quinault Nation entered into an agreement with the United States Government. In this agreement, the Quinault Nation sold their land for $25,000 over the course of 20 years, which equates to about a little over two million dollars by today’s value (at an interest rate of 3%) (Quinault Treaty, 1856, 2000). A section of reserve land totalling 84,271 hectares was created as per the treaty, as well. Within this reserve, the Quinault Nation is able to make land and people based decisions, but overall sovereignty lies with the United States government. This is also laid out in the treaty (Quinault Treaty, 1856 2000). That being said, the Quinault Indian Nation still claim the sovereignty, and call themselves a sovereign nation.

On February 1887, the General Allotment Act devolved the ownership of lands into the hands of Indian individuals. The Act allotted lands within the reservation where agriculture and grazing are suitable to a few tribal members. This generated frictions among community as there was contention over who are qualified of owning lands. As a result, during 1905 to 1933, a total of 2,340 land allotments was issued. This smashed down the common ownership of most lands within western coastal tribes.

In the reservation, as promised in the Quinault Treaty, Article 3, the tribes within the reservation obtain the right of conducting ancestral practices, in all usual and accustomed grounds, including the right of fishing, hunting, gathering. The Quinault Indian Nation also get to manage and harvest the natural resource. However, due to the General Allotment Act in 1887, the allotment of over 200,000 acres made the resource management extremely difficult for the tribal government, as now the nation owns less than a third of land within reservation.

The Quinault Indian Nation claims inherent rights to their self-governance. In 1922, the tribes in the reservation established their own by-laws. In 1975, the tribes within the reservation drew up a constitution. And 13 years later, the U.S. Department of the interior, Bureau of Indian Affairs, introduced the Self-governance Act. The Quinault government formed based on their original constitution, as a result of implementation of this Act. The Quinault people decided that they prefer a semi-independent reservation without external interference.

Today, as the customary traditional way did, the tribal leaders meet annually on the last Saturday in March, as the General Council of Quianult Nation, to conduct election, accepting new members, allocating fishing grounds and forest management. As a result of this meeting, the Quinault Business Committee, an eleven member tribal council, including 4 executive officers and 7 council men, was formed. The 4 executive officers include positions of Chairman, Vice chairman, Treasurer, and Secretary. Currently, in year xx, the Chairman is Fawn Sharp. The Business Committee will be in charge of business, administrative and legislative affairs during the whole year.

Currently, the reserve allocated more than 150 years ago still exists, and many of the descendants still live and thrive there. The outlined Quinault River Treaty outlines the right to fish and hunt within their traditional territory, the right to erect temporary housing to facilitate such hunting and fishing,

One key consideration of the Quinault River Treaty is Article 6, in which the treaty states that the current United States President can “remove [the Quinault Nation peoples] from said reservation or reservations to such other suitable place or places within said Territory as he may deem fit”, if such a move is intended to benefit the welfare of the people (Quinault Treaty, 1856 2000). However, there is no evidence that this article has been utilized.

The following table shows the affected stakeholders within the reservation and assessment of their relative power in local affairs.

Currently, the affected individuals include the members of the Quinault Nation, and individuals who live within the proximity of their nation. The Quinault Nation focuses on generating revenue to bring back into their community, as well as exercising efforts to regenerate their culture. One of the methods they are using to regenerate their culture is the usage and regeneration of their language; this regeneration includes teaching the language to anyone who will learn, as well as scholarly assistance in analyzing the linguistic structure of the language (Terry-itewaste 2006). Other individuals that live within close proximity to the reserve would likely be directly affected by any management decision made regarding the Quinault Nation.

The number of interested stakeholders is quite large. Firstly, there are the regional and national governments, which have the same goals. Their primary goal is to make promises to the citizens primarily, and eventually secure their re-election. While they do not need to primarily cater the the Quinault Nation’s needs, they do need to ensure that the condition of the Quinault Nation does not create political backlash, and thus far, there is no evidence that states that the government is doing an unsatisfactory job. Next, there are the consumers of  the goods and services that the Quinault Nation provides. They simply want to continue utilizing the goods and services that are provided. Finally, there are the groups that are interested in Indigenous affairs. These include, but are not limited to, scholars, other Indigenous nations, and various social groups. The primary goal of these groups are to promote the strongest social and economic conditions for the Quinault Nation (and other Indigenous nations as well).

Additionally, the Quinault Nation operates a resort-casino. It was initially funded by using their own forests as collateral (Monsarrat 1999), and according to their website, it continues to remain in operation today (Quinault Beach Resort and Casino 2019). Being in business for two decades states that the Quinault Beach Resort and Casino is relatively successful, and thus, is making profit.

The power structure of the Quinault Nation seems similar to a municipal government. While rules and regulations may be established within the community, they still must adhere to the overarching rulings of the state and national government. However, there are some exceptions to this; special rules may be made specifically pertaining to the Quinault Nation, such as their right to hunt and fish in the area (Quinault Treaty, 1856 2000). Additionally, the various levels of external government likely would not interfere with the government of the Quinault Nation without reason, for fear of political backlash and interfering with their chances of getting re-elected.

While there is no method available to change the past, there were a few options available to the Quinault Nation. The first is that, as stated before, the amount of money they got (examining it from today’s terms) is minimal compared to what their land area is worth (actual numbers are not known, but the area that their territory encompassed is definitely worth more than a few million). Unfortunately, there is a lack of information on whether or not the treaty deal was made in good faith. No information found indicated that the treaty deal was in poor faith, aside from the dealings being less than favorable than what would be expected today.

As for modern standards, it is believed that the Quinault Nation is doing relatively well. There have already been efforts to revitalize their culture, and their local economy seems to be doing quite well. As a result, it is recommended that the revitalization of their culture continue, all the while continuing to maintain good relations with local and national governments, as well as continuing to support themselves with their sustainable goods and services. If an business opportunity presents itself, like any good entrepreneur, it is recommended that the Quinault Nation take advantage of it.

Quinault Indian Nation. (2003). People of the Quinault. Retrieved from http://www.quinaultindiannation.com/