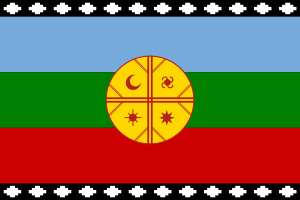 Flag of the Mapuche People, adopted in 1992 and first presented to the Spanish King upon his visit to Chile.

In an area located in south-central Chile there is a group of people that have survived repeated invasions and colonial conquest over hundreds of years. This group has been oppressed by the post-Independence Chilean government and were pushed from their home lands in the late 1800's. The Mapuche People who once stood at a strong 1.5 Million in population have been reduced to about ⅔ of their original strength. Most of the population is forced to live in squalor, in poor rural communities. With the rising strength of millennial populations that are better educated, the Mapuche People have started to fight back against the oppression. With a population that makes up nearly 10% of Chile’s, the Mapuche people are grossly underrepresented in the Chilean government. A more active group of Mapuche people are now pushing back against the government in violent and disruptive ways, intercepting logging trucks, burning farmland and shooting uncooperative personnel. With outcries for the reinstatement of traditional Mapuche land, the Chilean government is facing a national crisis that is being closely monitored by the world as a large scale indigenous vs. state altercation. 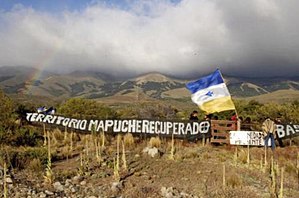 The Mapuche people are holding out for a long battle between them and the Chilean government. After being persecuted for decades the new younger Mapuche generation are starting to become a more educated people. This education has taught them the cruelties the government has been conducting towards their people and on their land. This new younger generation of Mapuche individuals are protesting and standing up to the government to reclaim their traditional ancestral territory but are being met with cruelty and sometimes violence.The Mapuche people's objective is to stand up for their ancestral land which was forcibly taken away from them by the Chilean government  in the 1880s and reclaim the area as their own and expel all large industry operations on the land that are destroying the local environment. .The southern Mapuche stronghold of Temuco has been a key focal point for these people as it represents one of the few cities in Chile where the Mapuche are the majority. Even though the Chilean government attempted to make reparations with the Mapuche people in the 1990's many groups of Mapuche people have radicalized and started to carry out attacks on businesses operating on their traditional land. These attacks include Arson, sabotage, and assault.(Pipiniot, 2018) The Mapuche are searching for greater reparations and proper representation in government so the future of the Mapuche can be taken into consideration along with the future of Chile. The Chilean government has already begun taking steps to end this dispute  by creating a reparations commission that would distribute owed land, money and educational scholarships. (Radwin, 2017)

Means of Reparation- The people of Chile are searching for an answer to this dispute and the Chilean government is trying to make amends to all who were wronged during the dictatorship. The main means of reparations have been reinstating land to Mapuche people but much of this land cannot be further developed by the Mapuche in the same way that industry can because of the lack of capital and machinery. [Government support would be a form of reparations for the stolen land of the Mapuche.] Further research and surveys are being conducted to try and figure out the most optimal way to give back to the Mapuche but many of these options require payment of compensation to groups of people.

Pardal, Alberto Barba. “In Chile, the Mapuche Are Battling for Their Land.” Equal Times, www.equaltimes.org/in-chile-the-mapuche-are-battling.