Impact of the Caste System in Post-Colonial Mexico In 1521, the Spainards defeated the Aztec Empire to establish the colony of New Spain, which lasted for 3 centuries.[1] The indigenous populations in Mexico were not able to resist the Europeans because of lack of military needs such as gun powder to fight the Spainards and lack of immunity to European diseases such as small pox which decimated the Mexican population significantly.[2]

Before colonization by the Spanish, Mexico was generally a homogenous population due to its location and already established class structure. After colonization the Mexican population changed drastically, as there was approximately 6 million inhabitants in what was once called New Spain. 60,000 were those of Spanish descent from Spain and 940,000 were those of Spanish descent born in the territories, which changed the structure of the social, class, and racial structures.[3] This caste system imposed by the Spanish elites was defined by the different levels of biological mixtures between the different ethnic groups living in Mexico at the time and decided one's socio-economic status, wealth and quality of life.

The caste system was a complex racial and biological hierarchy that did not allow for social mobility. The following hierarchy of the caste system is not an exhaustive nor fully extensive list since the many ethnicities and racial groups present during this time makes it difficult to record the exact social hierarchy. 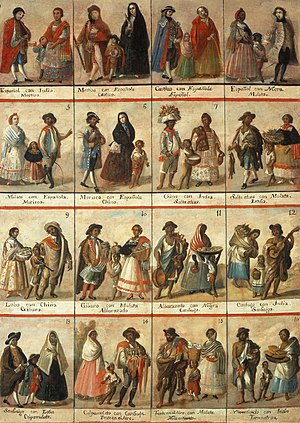 Hierarchy of the Caste System in Mexico

Those who were biologically more European enjoyed a better standard of life and a higher social class than those who were from Indigenous or African lineage. This strict hierarchy caused discontent among the people. For example, the Creoles were by law prohibited from holding the highest positions in government and the Church simply because they were not born in Spain, while Peninsulares were the only caste allowed to hold these positions.[5] Those who were of African descent often lived lives of low social wealth because they were often associated with the notion of slavery and were prohibited from holding many positions in life.[6] Along with the African populations, the Indigenous people in Mexico were often taxed more than the other castes simply based on their social and racial standings.

Independence of Mexico and the Implications of the Caste System

Many castes in Mexican society became resentful of the racial, economic, and land inequality that was present due to colonial rule and the rigid caste system imposed by the Spanish. The Creoles resented the fact that they were considered inferior to the Peninsulares, just because they were born in the Americas.[7] However, the Peninsulares and Creoles enjoyed a much wealthier life than those of the lower classes, which caused civil unrest leading to the inevitable revolution in Mexico. The Literary Club of Queretaro was originally a group for intellectual discussion that was forced underground, but later became a basis for the organization for revolution.[8] They began to consider enlisting lower castes such as the Indigenous and Mestizos to join the movement for independence and take control away from the Peninsulares.[9] 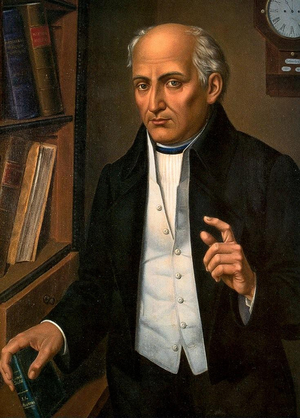 On September 16, 1810 Father Miguel Hidalgo y Costilla issued his Grito de Dolores or "Cry of Dolores" signalling the start of the Mexican War of Independence.[10] Thousands of those who belong in the Indian caste and Mestizos joined the movement, creating a peasant army to overthrow the capital in Mexico City.[11] This long war eventually led to the recognition of Mexico's independence in 1821, and a new emperor of the Mexican empire, Agustín de Iturbide.[12] Despite achieving independence, there was still a racial divide that lingered from the Spanish imposed caste system. Under the rule of Agustín de Iturbide, Mexico became a constitutional monarchy that gave the Creoles the same rights as the Peninsulares. However, under this newly formed act of independence for Mexico, those who were of Indigenous ancestry and of mixed ethnicities were still considered inferior to the Peninsulares and Creoles, not being given the same equal social or class status.[13]

From 1876 - 1910, Mexico went through economic growth under the leadership of dictator Porfirio Diaz. Despite the economic growth, Mexico was subjected to social deterioration at the same time that stemmed from the caste system (98).[14] There were large disparities among the distribution of wealth, as 800 Creole families owned 97% of national territory (99). Public education was disregarded and workers and peasants incomes were at low levels, resulting in only 17% of the population being literate and 90% living in extreme poverty (99). The racist attitudes of the Creoles towards the Mestizos and the Indigenous prevailed despite the eradication of the caste system (99). This showed the despite living in post-colonial times, Mexico was still constructed under strict racial and social classifications.

Reasons Why the Caste System Survived During the Revolution

Several factors explain why the caste system was still prominent during the revolution:

Lasting Effects of the Caste System in Modern Times

Current Mexican ideology suggests that the Spanish imposed caste system has not existed since the abolition of it in 1821, but as seen above, the impact and effects of Mexico's caste system not only prevailed post-independence and post-revolutionary times, but is still present in modern day Mexico as well.

According to the journal article titled "Mexico's Resilient Caste System: Managerial Implication For Foreign Firms" by Rutilio Martinez and Chris de la Torre, the revolutions from 1910 - 1917 were supposed to eradicate the remains of the caste system, however, even in post-colonial Mexico the wealthy are still most notably white, the Mestizos make up the middle and working classes while those living in poverty are mainly of Indigenous descent (97). All aspects of Mexican life are impacted by the current racial reality in Mexico. The expensive private schools, that are considered to be the best performing in the country, have a student population that is prevailingly white and the Creole class are the only ones to have leadership positions in Mexico's private sector (98). Areas with the most profound effects of poverty are found in the southern states, with a population that is mainly Indigenous (98). Mexican celebrities seen on television and ads are usually those who appear to have European features because their target market are the ones of European ancestry that have the resources to buy the products (98). Furthermore, Latin dark skinned athletes do not posses the same image of sophistication as their European counterparts, so they do not usually endorse products because their features are too "Indian" (57).[16] Although in Mexico there is a growing number of darker skinned consumers buying luxury goods, this does not give them a place in equal standing with white society associated with wealth (58). The Mexican white population still regards these groups as racially inferior despite wealth and ability to consume luxury goods (58). 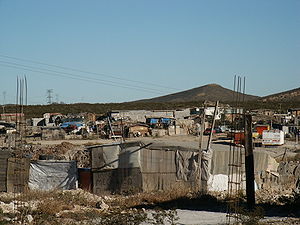 Another attribute to Mexico's racial reality is the attitudes and behaviours toward each different ethnic group. Mexican whites see their position of social and economic privilege as their right, while they see Mestizos and Indigenous Mexicans as racially inferior to themselves because they are considered "lazy, inept, dirty, and ugly" (98).[17] Many Mestizos who do appear to be more physically European, will often be ashamed of their Indigenous ancestry and will deny or hide it from others (98). They also see Indigenous Mexicans as inferior to them, which has caused deep resentment towards the Creoles and Mestizo populations in Mexico (98).

Skin Colour as a Link to Social Inequality

According to a study done by Andrés Villarreal at the University of Texas in 2010, he surveyed three primary groups of respondents that varied in skin colour; blanco/güero (white), moreno claro (light brown), moreno oscuro (dark brown) along with socioeconomic status.

He found that people associated with light brown skin were 29.5% less likely to have a college education compared to those who are white, and 56.7% less likely if they are darker in skin colour.

The discrepancy in different opportunities of education for each category of people were found to be a reason but did not explain all the differences regarding occupational status.

Domestic workers, manual workers, drivers and security guards, which are considered low occupational in category, are more likely to be employed as people who are dark-brown and less likely than those who are white. The highest status occupations such as office supervisors, professional workers and employers are mostly those of white skin colour. Respondents who are light-brown are 25.2 percent less likely to be a professional worker than those who are white. Those who are dark-brown have 35.9 percent lower changes of being an employee in the top two occupational categories than someone who is white.[18]

These results lead one to believe that discrimination based on skin colour in the workplace is present in Mexico, which stem from the effects and stratifications of the caste system.