Alport syndrome is an genetic disorder that is caused by changes in the Type IV Collagen genes. [1] Changes in the genes cause an altered structure and function of the kidneys, ears and eyes. The incidence of Alport syndrome is 1 in 5000 individuals, and is most commonly associated with a genetic change on the X chromosome within the collagen gene that prevents it from functioning properly. Alport Syndrome is most commenly inherited in an X-linked pattern, but has also been described to be inherited in both autosomal dominant and recessive patterns.[2]

Alport syndrome typically has an early onset, presenting in late childhood and early adolescence, although some inherited forms do not manifest until adulthood. The majority of affected individuals have declining kidney function (present in 90%), hearing loss (80-90%) and vision problems (20-40%). [2]

Females are generally viewed as "carriers" for XLAS, yet they can also be found to express some of the same symptoms men do. Generally females expression of the symptoms are less severe and later later onset. Information about age of onset and disease severity is typically based on the individual female rather than family history.[2][4]

People that are carriers of ARAS only have one altered copy of the gene and are not expected to present with symptoms.[1] [2]

ADAD very rarely has involvement of the eyes.[1] [2]

Alport syndrome is an genetic disorder that is caused by changes in the Type IV Collagen genes. [1]

Collagen and other glycoproteins make up the basement membrane; this layer provides structural support to the tissues within the body. [5] Changes in genes that encode collagen cause a disruption of the organization of these layers, resulting in an altered structure and function of the kidneys, ears and eyes.

-chains) of type IV collagen, which interact in groups of three. When faulty

-chains are produced the chains are unable to interact properly and lead to the weakness of the basement membrane. [5]

Alport syndrome is diagnosed by: [6]

The prevalence of Alport syndrome in the general population is around 1 in 5 000 in the U.S., and the autosomal recessive Alport syndrome is estimated to affect 1 in 50 000[7] [4] The incidence of Alport Syndrome was found to be substantially lower in Finland effecting 1 in 53 000, and Souther Sweden at 1 in 17 000.[7] Alport is seen in twice as many females as males; this is because the majority of Alport is X-linked where men can only pass the condition on to their female children and not to their male children.[4]

Once identified, kidney function is continually assessed. In addition, individuals with Alport syndrome are often monitored and treated for high blood pressure, or hypertension, because of the potential impact on blood pressure due to its relationship with kidney function. [1]

Treatment involves the use of angiotensin converting enzymes (ACE) inhibitors, as these have been shown to be highly effective in children, with minimal side effects. [1] As the disease progresses, dialysis is used to help the body by filtering the blood through an external filtration system and kidney transplantation is considered.

Ongoing hearing assessments are used to detect progression and hearing aids are prescribed as needed.[2]

Detailed and regular ophthalmological appointments are used to monitor progression and provide surgical interventions when needed.[2]

Should be tested annually for albuminuria and hypertension.[4] 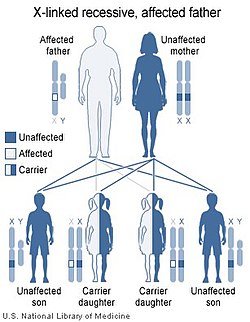 X-Linked Alport Syndrome (XLAS) is caused by mutations in the COL4A5 gene located on the X chromosome. [1]As an X-linked condition, males typically have a more severe presentation than females, as males only have one X chromosome. In females, the presence of a functional gene on the second X chromosome can partially compensate for the mutated gene on the opposite X chromosome, but males do not have this compensatory effect. Chance of Having an:

Chance of Having an:

Mutations in either COL4A3 or COL4A4 are responsible for autosomal recessive (ARAS). The term recessive means that both copies one form mom and one from dad need to be affected to display ARAS.

There is no difference in risk between male and female children. 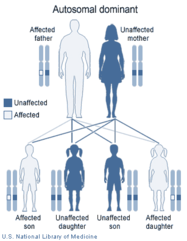 Mutations in either COL4A3 or COL4A4 are responsible for autosomal dominant (ADAS) Alport syndrome. The term dominant means that only one gene change from mom or from dad is needed to ADAS.

There is no difference in risk between male and female children.

Genetic counselling helps individuals and families understand and adapt to the implications of genetic testing.[8] In the context of Alport syndrome, it involves: